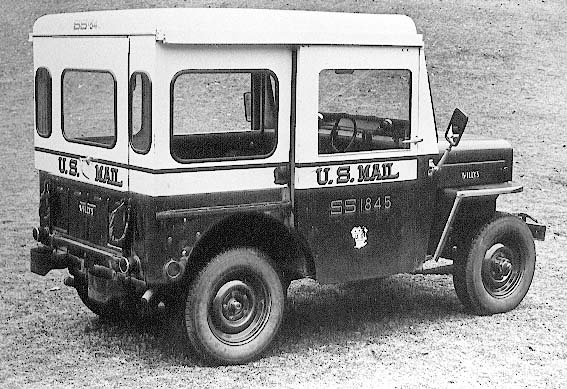 Little is known about this right-hand-drive delivery version of the CJ-3B, produced under Engineering Release 10233. Photographed in March 1954, it had a white Koenig hardtop and U.S. Postal Service livery. There is no evidence that Willys actually gave it a DJ designation. Although a production model would likely have been two-wheel-drive, the prototype in the photo appears to be built on a four-wheel drive CJ-3B chassis (with locking front hubs.) Presumably it used the F-head 4-cylinder Hurricane, and would have replaced the DJ-3A as the primary Willys fleet vehicle. Under a 1958 Engineering Release, six additional prototypes were produced for the Post Office. However, either Willys or the Post Office apparently decided to stick with the DJ-3A, which was produced until 1965 when it was replaced by the DJ-5 Dispatcher 100.