A few photos and bits of information have turned up to indicate that Willys Motors tried more than once to sell CJ-3B Jeeps to the U.S. Postal Service, both before and after they began the long and successful arrangement of providing two-wheel-drive DJ-3A and DJ-5A Dispatchers as mail trucks. I have posted those photos in various places on the website, but it's probably time to put that information together in one article, and see if it will prompt anyone to come forward with any further details of what happened to the prototypes, and whether any of them were actually put into service.

This article is also about truth, and about believing everything that you read on websites. One of the real dangers of relying on the internet for information, is that when something appears in electronic print, it is very easy for people to copy and repeat that information. If some of the facts are wrong, it is very difficult to correct them once they are posted in a hundred different places.

CJ3B.info has occasionally been the source of this kind of misinformation. Although I normally try to verify and cite the source of my information, and to use words like "reportedly" or "apparently" when the facts can't be confirmed, small factual errors made here have been copied and pasted into web pages around the world. And my lighthearted invention of the term "DJ-3B" to refer to high-hood postal Jeep prototypes, is unfortunately one of those things which became widely accepted as historical fact.

So let's make it clear here that if Willys did build experimental two-wheel drive versions of the CJ-3B to potentially replace the DJ-3A Dispatcher as a delivery vehicle, there is no evidence that they used the designation DJ-3B. 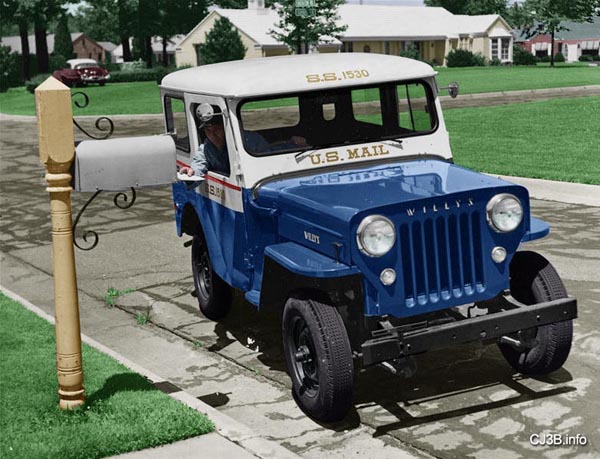 It's not clear whether this example was two-wheel drive, although 1953 press coverage reported that it was.

This picture also raises the issue of whether to believe everything you see in photos. Sharp-eyed readers will have noticed that this is not actually a color photograph; it is a black and white photo (100K JPEG) colorized by me for CJ3B.info. But it will likely be downloaded and posted on other websites with no mention of that.

The caption in a History of Mail Delivery in the Toledo Blade reads: "The first American car in thirty years to feature a right-hand drive came off the Willys Motors assembly line in Toledo. The Jeep vehicle was made especially to order for the U.S. Post Office Department and was used on suburban mail routes in Toledo, Ohio. -- International News Photo" 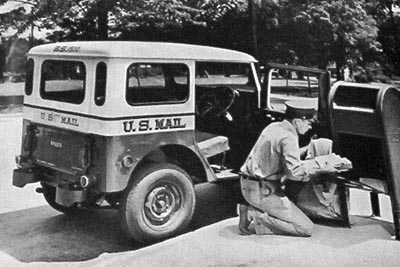 Despite the "International News" photo credit, the above photo is probably a Willys promotional shot. Another photo of the same Jeep was found by Bill Norris in Willys-Overland's 1953 Annual Report to the stockholders. The caption reads: "Special mail carriers, utilizing the economy of the Willys panel delivery trucks, have been developed and are currently in use by the government." The photo was also published in Popular Science (100K JPEG) in October 1953, with a caption stating that it was two-wheel drive.

The fact that the mailbox is open, and the Jeep is labelled with "U. S. MAIL" and a vehicle number, suggests that the vehicle was indeed in actual use by the USPS. The significance of the number "S.S. 1530" is not clear; maybe it indicates an experimental or test vehicle.

Significant alterations have been made to the top and the Jeep to better meet the requirements of the postal service. The Jeep has right hand drive, the spare has been removed (and replaced with a reflector) to allow closer access to mail boxes, and bumperettes have been installed on the rear. Both the top and the body have been modified to allow easier entrance and egress, and the cut-away body allows a specially-designed door to have a large roll-down window for better rural postal box access. Notice that the tool box has been removed in the cutting away of the side opening. Two additional rear windows have been added on either side of the lift gate. Another photo of the same Jeep appeared in Popular Mechanics (100K JPEG) in March 1954, and again the caption mentions 2WD. 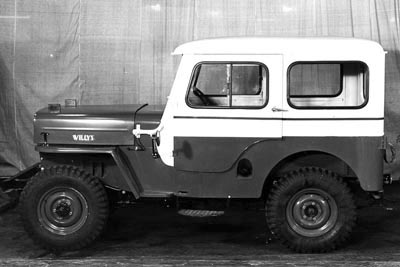 This 1953 factory photo from the John A. Conde collection shows a Worman Sedan Body hardtop installed on a CJ-3B and painted in USPS Postal colors, under Engineering Release 14113-4. No other alterations are evident to this left-hand drive 3B. The standard door sill and the window with two panes of glass sliding horizontally on tracks, would both likely be unsatisfactory for mail delivery, but this may be an initial step toward the modified design seen above. See also a rear view photo (100K JPEG). 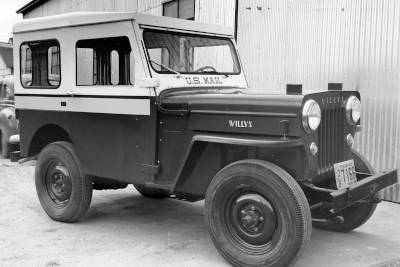 Koenig Iron Works in Texas was apparently also asked to supply a hardtop for evaluation. Two photos from the collection of Bill Prince show a top similar to the Koenig Super Cab but with doors designed for permanent installation, rather than for relatively easy removal. 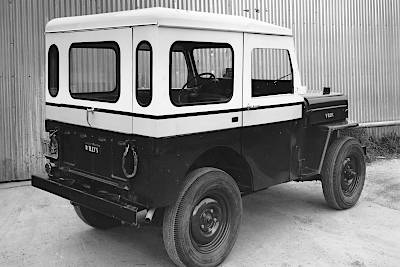 The Koenig doors did have full-size roll-down windows. The rear had the standard swing-up hatch and tailgate, like the Worman tops above.

These are Koenig photos, so it's unclear whether this CJ-3B with 1953 Texas plates went to Willys or the USPS for testing. 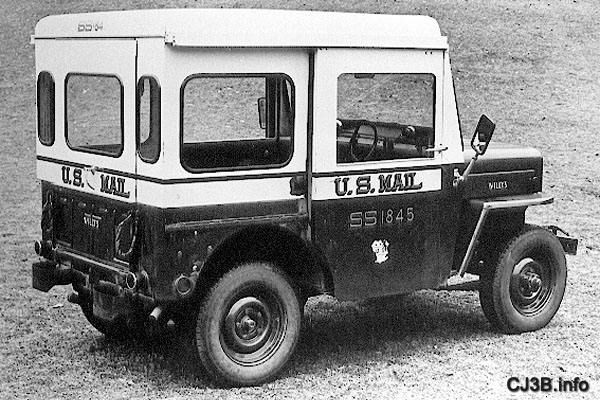 Incorrect information can even come from original primary sources, such as the captions on Willys factory photos. For example, the typewritten caption on this March 1954 black and white photo states that this experimental mail Jeep, produced under Engineering Release 10233, was painted red.

I took this at face value and repeated it on CJ3B.info, but I now realize the caption was probably intended to say "blue and red."

There is no other source that supports the idea that this Jeep would be painted red. The design, the lettering and the dark grey color in the photo, all appear identical to the standard blue and white paint with a red stripe, which was adopted in the early 1950s and is seen on other mail Jeeps.

This CJ-3B, with USPS number S.S. 1845 had right-hand steering and may have been two-wheel drive. It had a hardtop made by Koenig, this time with a sliding door. The spare tire was removed to provide clearance for the door. The USPS conducted tests on a variety of vehicles in 1954, and according to the Smithsonian National Postal Museum, the four civilian Jeep vehicles entered impressed postal officials for their light weight and maneuverability. This CJ-3B was probably a participant in those tests, based on the wear and tear it shows.

The 2000 Danbury Mint diecast model (see Postal Jeep Toys on CJ3B.info) and a drawing by Hubert Cossard (10K GIF) based on the model, portray the 1954 CJ-3B in blue and white livery. (But that again was likely just an assumption, and it also includes a wide red stripe that is not seen in any of the above photos.)

A 1958 Willys Engineering Release mentions six CJ-3B-based prototypes as having been produced for the USPS, but despite the apparent large scale of this initiative, I have seen no further details or photos. So the search goes on for the evidence which could clarify and complete this part of the history of the CJ-3B, and reduce the chances of speculation becoming accepted as fact.


Thanks to Craig Brockhaus and Dan Laity for finding the photo from the Toledo Blade, and Luis Mariano Paz for the magazine clippings. -- Derek Redmond

For more on mail Jeeps, see Delivery Jeep Bodies and The DJ-5 Dispatchers.