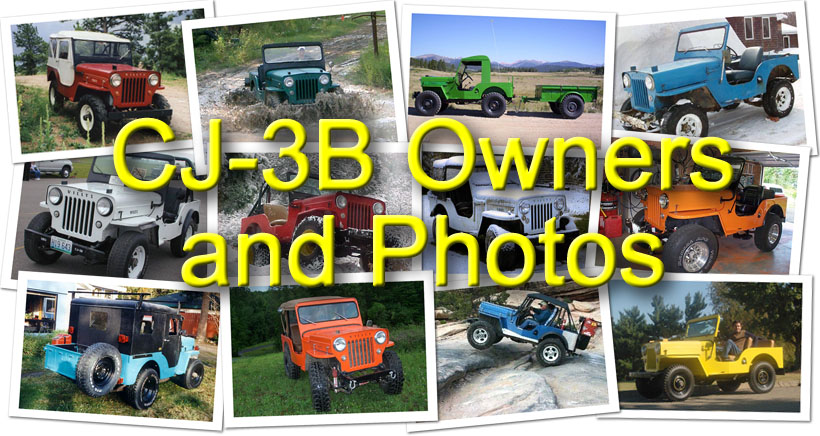 Welcome to the updated Owners' Photos section, full of the pictures you have sent in during the first 22 years of CJ3B.info. You can browse larger copies of the photos of the Jeeps by year, and read the feature articles on many of the Jeeps. And you can contact CJ3B.info to add your CJ-3B here.

1953 Owners and Photos -- the first year was huge for the CJ-3B, and many are still around.

1955-59 Owners and Photos -- production slowed after the CJ-5 was introduced.

1963-68 Owners and Photos -- some low-mileage survivors and the military version.

Yellow Jeeps -- did any CJ-3Bs come from the factory that way?

Building a Jeepney -- Ben Wallace brings it home to Texas

Junior Jacks Up His Jeep -- CJ-3B modified in Brazil

Willys Event Reports -- all of the Jeep show photos now in one place.

CJ3B.info Cover Pages -- many owners' photos were on the cover over the years.

F-4 Hurricane Engine Specs and Photos -- if you're looking for engine photos.

See Surviving CJ-3B Jeeps for a list of CJ-3Bs by serial number, with their owners and locations.

Jeep Lives Lived recognizes some of our Jeep friends who have passed away.