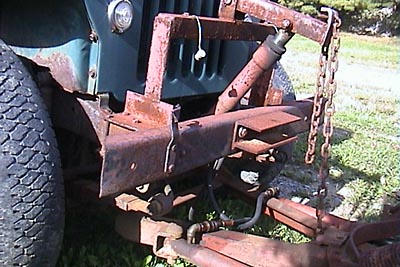 A green Jeep with a red snowplow; reminds me of my own CJ-3B. And like mine, I doubt that this one in New York state saw much action during the winter of 2001-02. But over the last half-century, I'm sure it has proved its value. 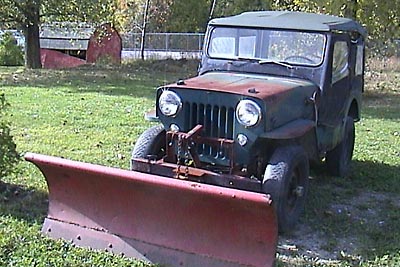 Photographer Jean-Francois Lavie says he found this CJ-3B in 2001 on the road from Schenectady to Burnt Hills NY. 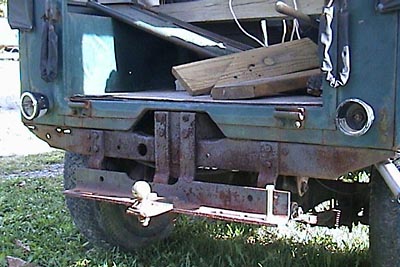 The red glass is missing from the original taillights, but the tailgate and chains are also original, and appear to be in good condition. 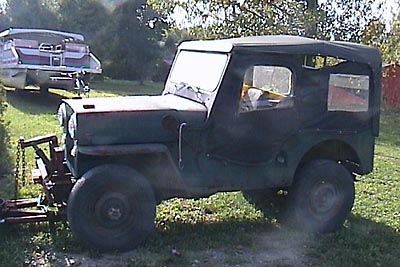 The soft top is somewhat the worse for wear, but is an original top supported by bows inserted in the rear bow sockets. 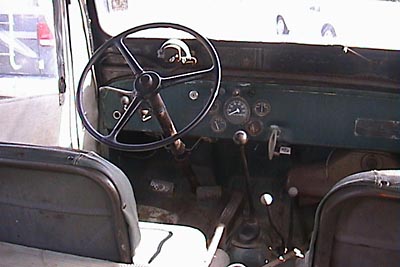 The dash layout indicates the CJ-3B is a pre-1957 model (see Dating a CJ-3B by Interior Details). I don't know who the owner is -- I'd be glad to hear from him. Mike Staves lives in the area, and although he doesn't know the owner's name, he says the owner uses the Jeep in the winter to plow his lot and in the summer he tows boats in and out of his upholstery and sail shop.

See also a detail photo of the heater (60K JPEG) whose "Willys" label actually provided the template for the repro sticker on Dr. Vern's restored heater on the old Vernco.com website. Local resident Andy Testo says, "I see the Jeep quite often; it's owned by Burnt Hills Re-Upholstery, I've gone there before to get quotes on re-upholstering my '52 wagon. Yes it is rusty, yes its full of junk inside, what Jeep isnt? And ironic isn't it that a reupholsterer's Jeep would have a poor soft top! Interesting fact: that very Harrison heater is part of Dr. Vern's "Willys" sticker, that he is manufacturing for the Harrison heaters. I spent a half hour taking nice pictures of it, in the dark."

Thanks to Andy and Mike, and J-F for the photos. -- Derek Redmond