Omar Ahmad works as a sawmill production supervisor on a plantation of 600,000 hectares of pine in eastern Venezuela. With his wife Marlene and two sons (Omar, 16 and Amir Jesus, 9) he has a property with horses, cows, and pigs, and a Willys CJ-3B Jeep which is used for every job in the fields, and for his son to drive to school in the city. The serial number 452GB1 28885 (from a 1949 CJ-3A) is on the documents of the Venezuelan automotive registry, but does not appear on the Jeep. 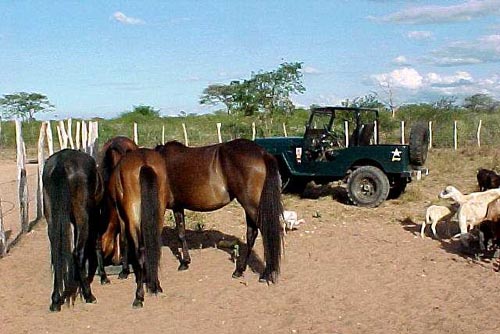 "I live in Bolivar State, between the river basins of the Orinoco and the Amazon. We have reserves of gold, diamonds, iron, aluminum, petroleum, forests and electricity. The Jeep Willys were of vital importance in the exploration and operation of all of these. They were assembled in the country starting in the decade of 1950. My older brother learned to drive in a 1947 Willys pick-up, property of my father who used it for diamond mining explorations. I learned to drive in 1969 in my father's Jeep CJ-5, but after his death in 1970, because of my age and lack of knowledge I sold it and bought a jeep toyota (as we called them in Venezuela).

"With the years came my children, and my oldest requested a vehicle to travel, to learn mechanics and to go to the university, and we began the search for an old CJ-5 to repair. A friend told me about a CJ-3 for sale, which is known here as a Willis. (A CJ-5 or CJ-7 or even Toyota or Nissan is known as a jeep.) I purchased it a year ago in Upata, a town which was one of the entrances to the mythical El Dorado of the Spanish conquerors. The owner did not know what a jewel he had, so the purchase was not difficult, and we began the reconstruction of Willis as we called it."

The photos below were taken by Omar beside the great Orinoco River, which flows into one of the largest deltas in the world, north of Bolivar state.

Thanks to Omar for the photos. -- Derek Redmond

See some other Jeeps in Venezuela on CJ3B.info.