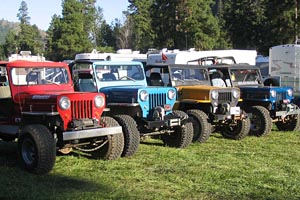 Please submit information on your CJ-3B if it is not yet included. We are approaching 2,000 Jeeps on the list. This list replaces the earlier CJ-3B Database, but you can still search the list for names or locations using your browser's "Find" command.

This list is ranked in order by serial number. Engine numbers are also included, where available and where the engine appears possibly original, but there are certainly some errors in that area.

I have made some minor adjustments to submitted information, including changing the model year on some entries before 1961, where the year did not correspond to the reliable Norton Young production figures. This corrects errors due to the original title being changed or lost, or the Willys practice of updating titles of unsold vehicles at the end of a model year.

The list includes the "OB" serial numbers at the beginning of 1954, but does not seem to shed much light upon their significance.

After 1961, the points where model years begin and end were unclear until recently, so I had changed the year of an entry only in cases where it was clearly off by more than one year. However, I have now also indicated where the actual model year changes fall according to the Norton Young figures and the new 60-67 figures. (Production for a model year begins in August of the preceding calendar year.)

I'm not sure of the statistical significance of the distribution of the serial numbers, which seem to be in clusters with occasional larger gaps. (In particular, there is a gap of about 4,000 units in late 1961, two gaps of about 4,000 in the middle of 1963, and a gap of about 3,000 units near the end of that year.) This is certainly an area which would bear some further research. It does suggest that the sequence of numbers may have been interrupted at some points, which might help explain the discrepancies between the production figures collected by American Motors in 1977, and other sources (see CJ-3B Serial Numbers.)

Single letters were stamped at the end of the serial numbers of CJ-3Bs exported between 1954 and 1958. The significance of the choice of letters is not clear, but they appear on Jeeps in a number of countries, so they were presumably added in Toledo. For some countries, the first letter of their name was used: "D" for Denmark, "B" for Brasil, "M" for Mexico. "A" appears once in our list, in South Africa, which may be why it wasn't used for Australia. The letters L, R, S, T and U appear on Jeeps sent to Australia, and "R" also appears in the Netherlands. "H" shows up in several different countries, "P" for India, and "Z" in Belgium.

The Importance of Engine Numbers

Having more engine numbers might help clarify the significance of the large gaps in the list of serial numbers. Currently there are not enough entries in the areas of the gaps, to determine whether there are corresponding gaps in engine numbers, or whether they increase steadily.

Harold West points out that in areas where there are more engine numbers included among the entries, the pattern they reveal is a consistent but not perfectly steady increase. Clearly engines were not installed on the assembly line in exactly the same order they were manufactured. In the Argentinian entries, and in some places in earlier years, the pattern can be clearly seen; Jeeps with serial numbers within ten units of each other or even consecutive numbers, will typically have engine numbers differing by up to 100 or more. (But there is also the fascinating 1964 consecutive pair of 8105130049 and 8105130050, which have engine numbers separated by only two.) In looking at the Argentinian entries, engine numbers in occasional cases are so out-of-sequence that it appears the engines may have been switched between Jeeps during military service.

Keith Buckley has done some further analysis of this for us -- see Plotting Engine Numbers.

Some Jeeps have engine numbers which are clearly not original, and were taken from another vehicle. Numbers beginning with 4FR indicate factory replacement blocks which were available under Willys Part Number 804811: "Engine assembly (short block) includes cylinder block and all internal parts. Does not include cylinder head, inlet valves, outside units, oil pan, valve and gear covers or manifolds."

The Switch to Kaiser 8105 Numbers

There is a very large gap of some 6,000 units near the end of the 57348 series in 1964, with just two more entries following it. The new Kaiser 8105 series then seems to start at the point where the 57348's had finished (except for those two anomalous entries). So it's still not completely clear how the switch between the two series was made; those two entries which seem to break the continuity are a puzzle. Knowing how the Toledo factory hated to waste anything, I would think it's not impossible that a few of the old VIN tags appeared on the assembly line and were stamped with numbers from the new series.

Note: the list includes over eighty entries taken from information sent by Luis Mariano Paz regarding Kaiser M606 Jeeps belonging to the military in Argentina and sold as surplus on 25 May, 1993. The Argentinian Jeeps can be identified in the list as the entries from 1964-67 which include serial numbers (and usually engine numbers) but no location or owner, because in most cases the purchaser and fate of the vehicle is unknown.

Thanks to all the contributors. Information can still be submitted for inclusion. -- Derek Redmond

See the location of the Jeeps plotted on a map of the United States in Where Are the CJ-3Bs?