Brian Palmer's "One Piece at a Time" 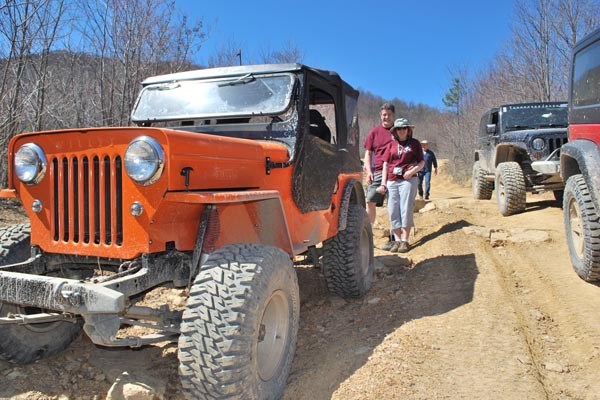 Brian Palmer in Michigan built this Jeep with used parts from Craigslist, and his shakedown trip in 2014 was the Tennessee Mountains Jeep Jamboree.

Powered by a 4.3 fuel injected SM420 from a Chevy S10, it also has overdrive, and power steering and brakes. Offset Dana 44 in the rear with the 30-spline flanged axle (the hard one to find), and Dana 30 narrow track limited slip in front. ARB lockers front and rear. 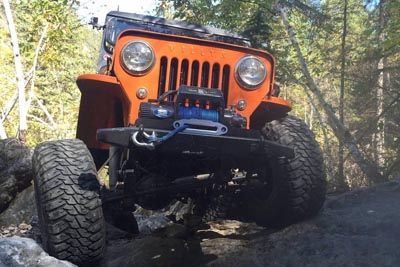 Brian's suspension is based on YJ springs with a spring reversal and 1-1/2 inch lift. There is also a 1-1/4 inch body lift, for 33" MTR's. If he wants to air them down there is a York compressor for onboard air. The Jeep has been given an RTI score of 795. 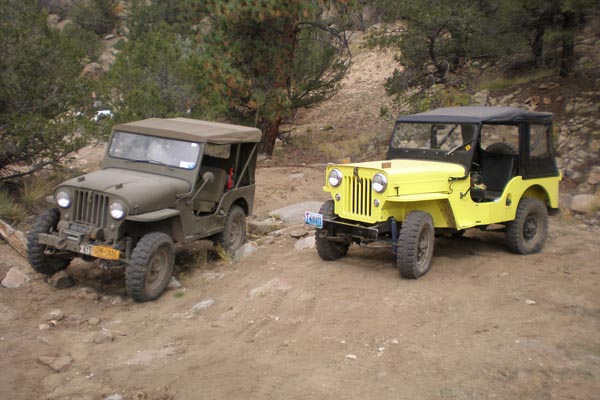 Here are a couple of CJ-3Bs which are a little closer to stock, and wearing tall but not huge tires, on the "Chinaman Gulch" trail during the 2016 Colorado Fall Colors Tour. The yellow one I wasn't familiar with -- it belongs to Keith Crimm. And on the left is Bob Westerman's clone of Willys prototype X98.

Jeff Petrowich posted a video on YouTube of X98 proving to be one of the few flatfenders to navigate the "Rock Garden" on Chinaman Gulch. 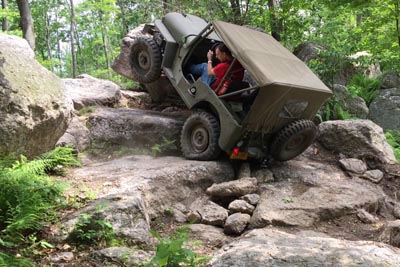 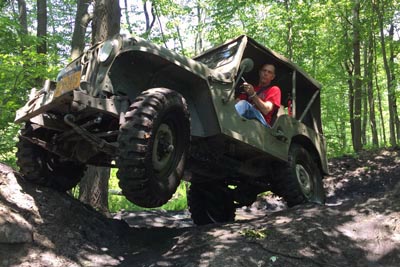 Bob takes advantage of the famous flex of the Willys frame, and a 1-inch body lift to clear the 7.50 x 16 tires. See Legendary X98 Brought to Life on CJ3B.info, for details on the other tweaks that make X98 into what Jeff calls a "super stock" Jeep. 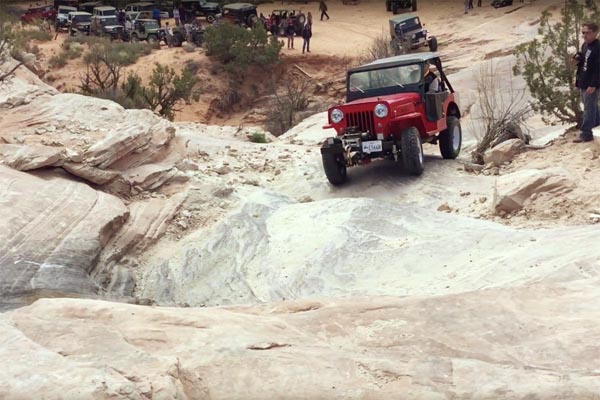 At first glance it may look like this 3B is coming down the rock, but look closely and you'll see he's actually coming up Wipeout Hill, one of the obstacles that attract Jeepers to the Easter Jeep Safari in Moab, Utah.

The EJS isn't exactly a show -- it's a week of shows and trail rides, and is one of the biggest Jeep events of the year. You'll see a lot of new, modified and tricked-out Jeeps, but also quite a few Willys flatfenders. 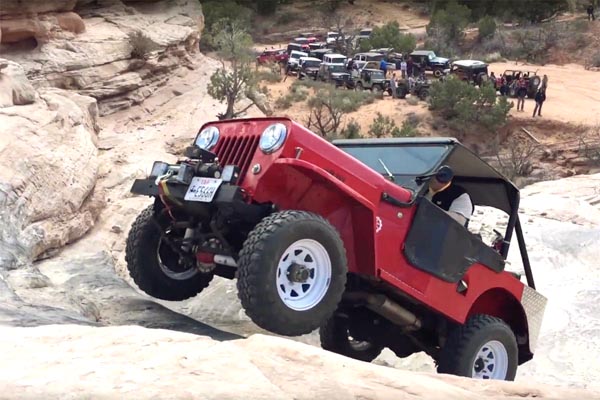 This nice 3B didn't make it to the top of the hill -- the lack of locking differentials meant he couldn't quite get enough grip. These photos are from the YouTube video Willys Flattys on Wipeout Hill by Jeff Petrowich. 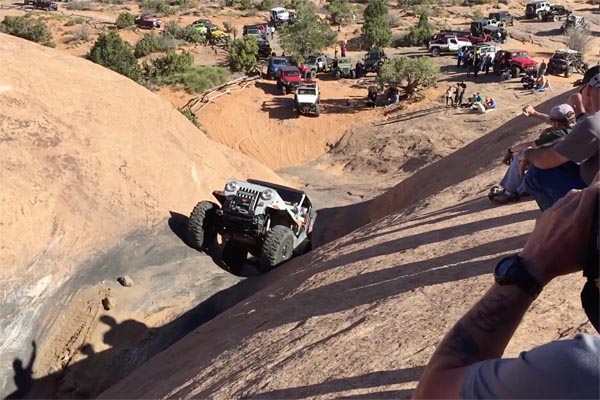 This year was the 50th annual Easter Jeep Safari, organized by the Red Rock 4-Wheelers. Part of the rocks that gave the club its name is another hill referred to as "The Escalator".

This heavily modified 3B belonging to a member of the Snake River Offroaders in Idaho powered its way up the hill. 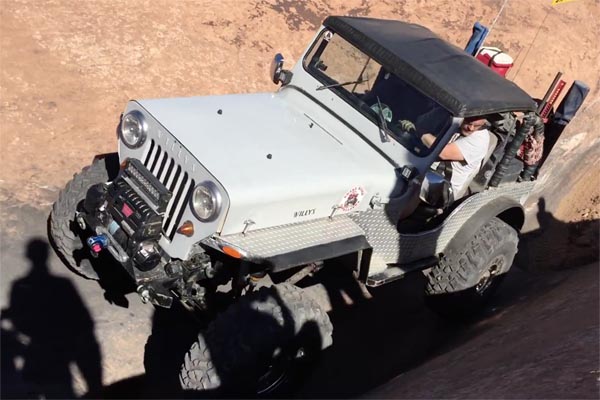 But at the end of Jeff's video CJ3B on the Escalator the Jeep is tilted up against the wall and having trouble getting out.

Thanks to Jeff for posting the videos. He also shot video of this Jeep at Hell's Gate and Mickey's Hot Tub, where he uses a strap on the front end to prevent a possible backwards flip. 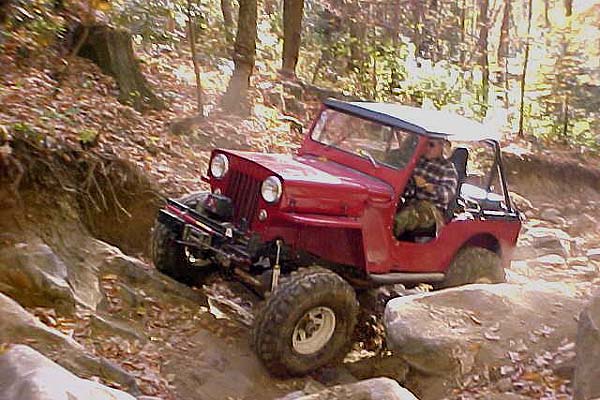 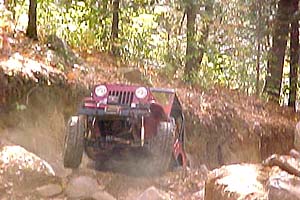 "These pictures were taken at the Upper Tellico OHV area. It is close to Tellico Plains, Tennessee, which is about 60 miles southeast of Knoxville. It is one of the best places in the USA to offroad." 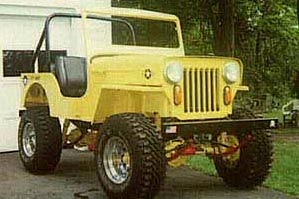 Rob Richardson in upstate New York built "Shore Patrol", a 4.3L V6-powered CJ-3B. He said, "I shouldn't even call it a 3B because the donor frame and axles are from a 1955 CJ-5. I put an aftermarket 3B body on it and painted it canary yellow. 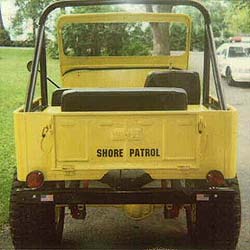 Rob commented, "I know CJ3B.info is dedicated to the preservation of the 3B, but I would love to see more modified 3B's, and find help from others who have gone before me." 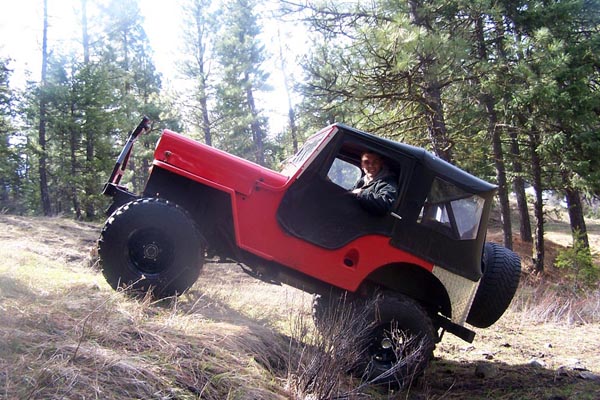 Well, here's another one, a '57 belonging to Steven Van Zanten in Washington state. It's lifted with its original springs over the axles, and has 33" Super Swamper tires, but also a set of road tires for daily driver use. With a Buick 231 V6 and a Warn overdrive, Steven says, "This Jeep can crawl through the woods, and go 60 on the freeway." See more in 1957 CJ-3B Owners and Photos.

Thanks to all the owners for the photos. -- Derek Redmond

For other rock crawlers on CJ3B.info, see: