I found my 1962 CJ-3B in January of 2001, sitting along an old country road in West Virginia. The Jeep was buried in weeds taller than I was, and the only thing discernable about it from the road was the grille, so naturally I had to inquire about it. The owner told me that if I wanted it he would sell it and give me a real deal on it. When it was all over and done with, he gave it to me.

Not having a way to get it home, I returned a week later with a trailer and was prepared to chop weeds and drag it out when the owner told me to be patient and he would be right back. When he returned he placed a battery in it and dumped a little gasoline in the tank and believe it or not, it fired right up. It did smoke a lot, but nevertheless it ran, and pulled itself out of the weeds onto my trailer (90K JPEG). 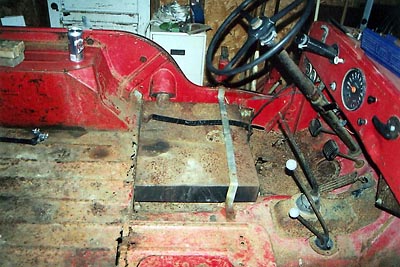 Upon getting my 3B home, and after careful consideration, I decided not just to patch it up, but to give it the resurrection it deserved. I removed the tub, which by the way was trashed (see also a photo from the left side, 110K JPEG.)

I completely stripped the frame, disassembled both axles, transmission, and transfer case (one at a time of course) and replaced all bearings, seals, and worn parts. 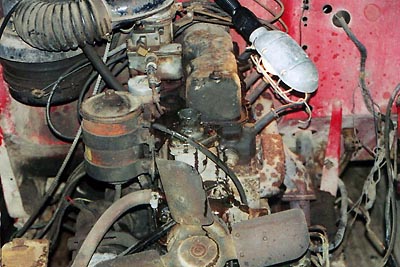 The engine was next on the list. After getting it disassembled I discovered that the rings were worn completely out, and the crank needed to be turned. After having the machine work finished I completely rebuilt the engine, replacing everything.

The frame was sandblasted and found to be very strong with just a minor crack in the front. I welded the crack and painted the frame. Wanting to keep the drivetrain as original as possible, I decided after consulting CJ3B.info to paint everything black, as was the original: 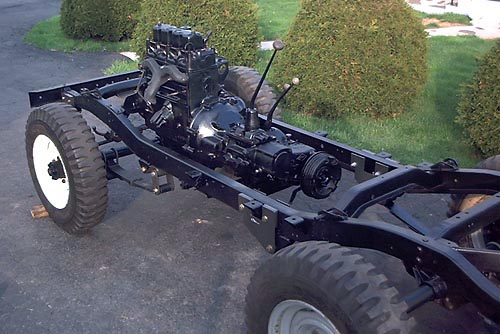 My last obstacle on the driveline was the springs. Every set of leaf springs was broken and not useable. I decided that since I really wasn't going to keep it completely original anyway, I was going to install Wrangler springs on it. I purchased a bolt-on conversion kit (YJ spring kits are available from various parts dealers). See a photo of the rear frame and springs (100K JPEG).

Along with the spring conversion I decided to convert to the newer Saginaw-type steering. With the help of CJ3B.info and a lot of good technical advice along the way, my steering conversion turned out great. 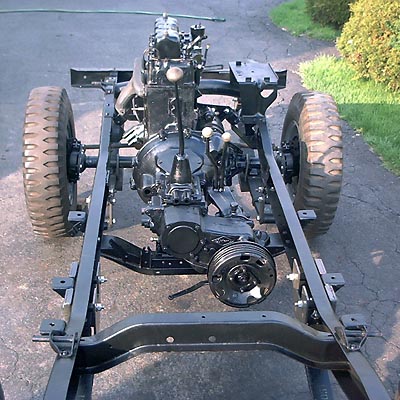 Now a year later the only thing left is the body. Since mine was really trashed, and the thought of spending $2500.00 just for a complete body really was not all that appealing, my search began. I just happened to post a request on the g503.com web site, and a man about two hours from me replied and said he had one. When I arrived at this man's house I found a treasure trove of old Jeeps and FC's. The tub had been sitting against the side of his barn for he said 15 years. With a little conversation and $200.00 I purchased a tub. It was an older body and I have to change out the dash panel and replace the floors but the rest is in decent shape. The best part was that I had found an old Jeep dealer who had gone out of business years ago and had a ton of NOS body panels and parts for the old CJ's, which I acquired for pennies on the actual cost new.

Hopefully by summer I will be driving around in my 3B getting a chance to enjoy it.


Thanks to Randy for the story and photos. See also his Dual Master Cylinder project. -- Derek Redmond