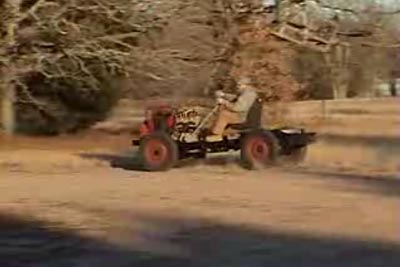 I have been watching CJ3B.info for the last three years or so while re-building (mostly on Saturdays) my 1954 CJ-3B.

While browsing thru the Clutch Tech Tips section I came across a link that "Oldtime" mentioned about a CJ-3B chassis test drive video at YouTube. Upon opening the link I realized, lo and behold, that it was my '54 3B chassis test drive. The video was taken last fall by my brother-in-law Bob Shaw. 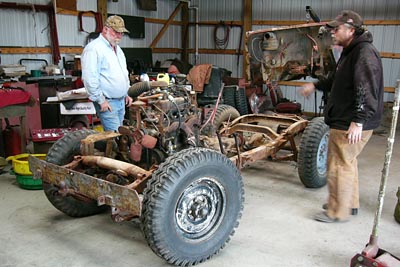 My friend Tom Sullivan of Flat Fender Restorations (160K JPEG) in Seven Points, Texas, where the video was taken, was the first one to test drive the 3B, since he supplied most all the expertise and quite a few parts. It only seemed right that he get to drive her first. In the video, I am the ol' gray-headed guy in the cowboy hat with the mile-wide grin on my face after my turn to drive. 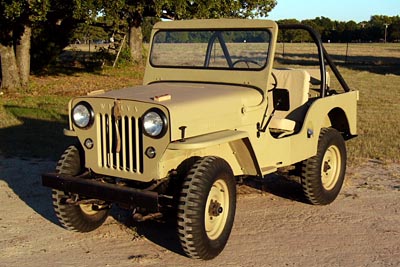 CJ3B.info and Bulletin Board have been a great source of info and motivation these last few years. I also have to give a tremendous amount of thanks to Bob Shaw who has restored his '44 MB, and Tom Sullivan, for keeping me on the correct path. What I started out as just "fix the brakes, rewire it and throw some paint on it boys," turned into, as Bob would say, a "while you got the door open, you might as well walk on in" kind of restoration. Bob and Tom dragged me away from all the years of"Bubba'izn" and helped me realize how much better my 3B would look and run when done back closer to original. 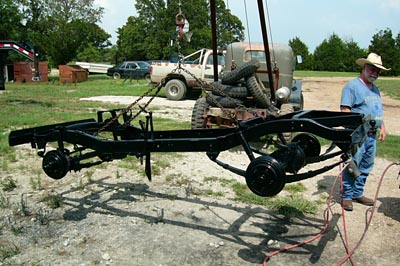 Mechanically, the 3B was in pretty good condition. Aesthetically (see the before photo, 140K JPEG) she could have been a winner of that Dilapidated Jeep Competition on CJ3B.info a while back. The F-head has great compression and the tranny/TC worked fine. We resealed everything and put new bearings, sleeves and gaskets where needed. New brakes, hoses, tires, seat cushions/covers, glass etc... Basically, If Bob and Tom thought it was worn, it was replaced or repaired. 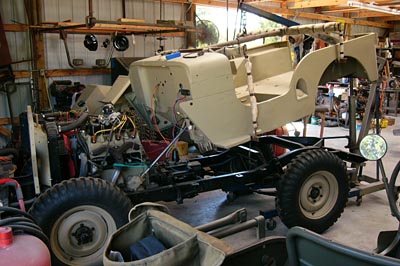 We sanded and power washed (200K JPEG) the frame and differentials, then applied a thick coat of heavy black frame paint. Sandblasted all body parts, welded up any extra holes, and replaced any Bondo with metal. The inside of the Tub was sprayed with Durocoat spray-in bed liner, while all underside body parts got three coats of undercoating. I had a hard time determining the original color, and opted for the mil-spec Desert Sand paint with black accent. I think she turned out real nice. 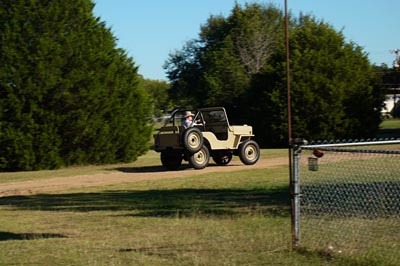 I've been around old Willys since Uncle Jimmy took me on my first Jeep ride at 12 years old, and have been hooked ever since. This 3B has been in my family for probably the last 25 years. Uncle Jimmy bought it at an auction from the State Fair of Texas, where it is rumored to have been used as a Zamboni for their ice rink. Not 100% sure about that. My Dad bought it and then sold it to Uncle Joe, who in turn gave it to me. Ya gotta love family like that! 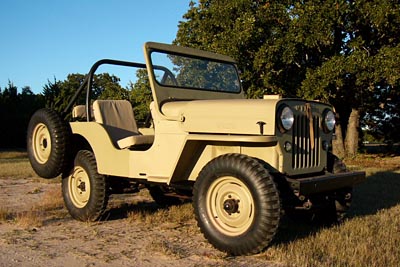 I've had it for the last 16 years, using it on the farm for feeding, fixin' fence, and hunting. But mostly just driving the kids around on the back roads of Kaufman County, Texas.

My Dad, Neil "Pop" Rushton passed away 3 years ago and this was my biggest motivation to revive the old Willys. This was something he always wanted to do but could not afford. I am sure Pop would be pleased with the way it turned out. -- Clint Rushton

Thanks to Clint for the story and photos. -- Derek Redmond