This Jeep in Oregon is serial number OB54 10595. As of early 2016 we know of about 30 surviving Jeeps out of nearly 2,600 with an "OB" stamped on their serial number plate at the beginning of the 1954 model year. Exactly what did "OB" stand for, and why was it stamped on only the first batch of Universal Jeeps built in 1954? See 1954 CJ-3B "OB" Serial Numbers and you'll be amazed at how much discussion these questions can generate.

Meanwhile, there doesn't seem to be anything else to differentiate this Jeep bought by JR's grandfather in Oregon, or the other OB Jeeps, from the CJ-3Bs built before and after them on the assembly line in Toledo. Here's JR's description of his project. -- Derek Redmond 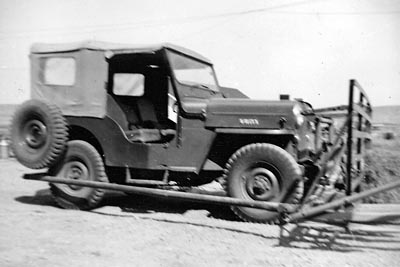 This was my grandfather's Jeep, bought on May 5, 1955 in Baker, Oregon. I am not sure if he bought it new or used, being a year and a half after it was made. He had a ranch in the upper Keating Valley, just east of Baker. The frame in the picture is for bucking hay. 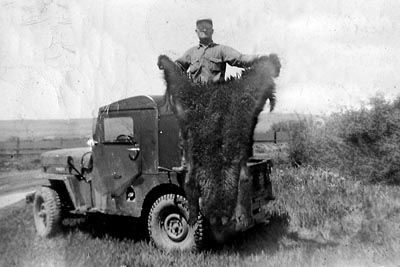 My grandfather, Frank J. Colton, also used the Jeep for hunting in the mountains. This picture is stamped May 1959.

I have my grandfather's original title for the Jeep as a souvenir -- the DMV sent it back to me after they transferred the title to my name. 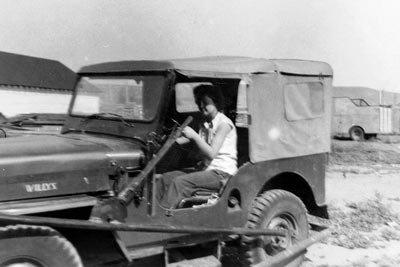 This picture is my mom Nora in the late 50's headed out to the hay field with the 3B to buck hay. The lever sticking up by the door is how you lower or raise the buck teeth. 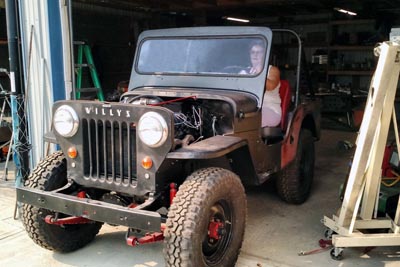 It had not run since 1971 until it rolled out of my garage in 2015, under its own power for the first time in 44 years. Here's my mom pulling the 3B out of the garage on the day I got it running. 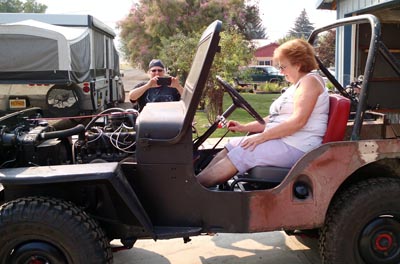 The original engine serial number was 4J41791. Unfortunately this engine is no longer in the Jeep. It was replaced before I obtained the 3B. It had a flat head in it when I received it, and I am now in the process of putting an F-head out of a '58 CJ-5 back in it. I am doing a frame-up restoration (90K JPEG) on it, and I will send more pictures when I finish it. 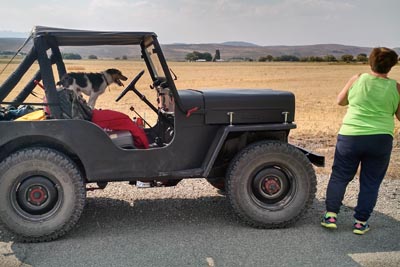 This one is the 3B parked looking across the hay fields at its original home.

I believe the original color of the Jeep is Gale Gray. The underside of the toolbox lid is the only place where the original paint is visible. Everywhere else is rusted, faded or had the red from the metal halfcab leached on to it. 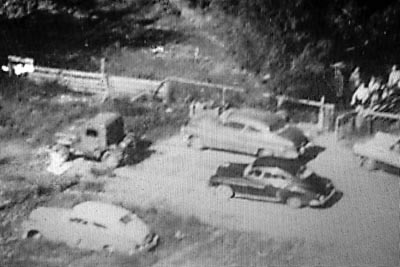 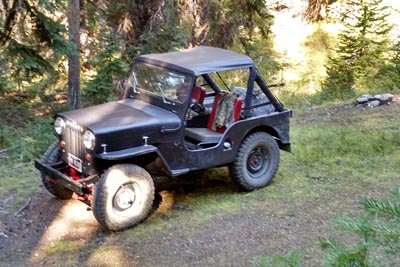 My 3B is now on the road again. I used it a lot in the last year as I got my project underway finally. I took some trips to the mountains where the 3B roamed when my grandfather owned it.

I still have work to do to get it completed but it is roadworthy again. I will not be able to paint it until next year but I should have everything else completed by then. -- JR Bass

Thanks to JR for the story and photos. Watch for updates on his OB Jeep. -- Derek Redmond