The Aero Willys car may be in some ways the most significant "Sibling of the CJ-3B", because the very existence of the 3B may be a result of the development of the Aero.

We have researched and speculated at length on CJ3B.info about the reasons Willys-Overland didn't bring a civilian Jeep to market in 1952 based on any of the CJ-4 prototypes, or on the military MD model which was mass-produced for the U.S. Army as the M38A1 starting in January 1952. The shortage of materials for new tooling due to the war in Korea, and the U.S. Army's reluctance to grant rights to the design they owned, appear to have been factors in the decision to instead sell an evolution of the CJ-3A called the CJ-3B. 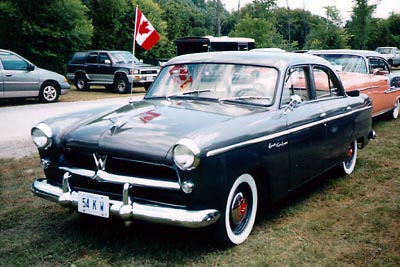 But the fact that Willys had also decided in 1949 to develop a new passenger car, would have clearly had an impact on Jeep R&D. As Bill Munro writes in his interesting account of Willys corporate politics in Jeep: From Bantam to Wrangler, "this would have a serious knock-on effect on the 474CJ programme because it meant that the cash available for the new Jeep would be seriously squeezed...."

So we ended up with the high-hood flatfender, and a pretty tasteful little automobile (at right).


Willys-Overland had built cars since 1908, and as early as 1943, they hired designer Brooks Stevens to work on prototypes for post-World War II cars. The Toledo plant was upgraded in 1946 with the intention of putting one into production, but it was kept on the back burner while the market for Jeep utility vehicles was exploited. In 1949 it was decided the time was right for an all-new entry into the economy car market. 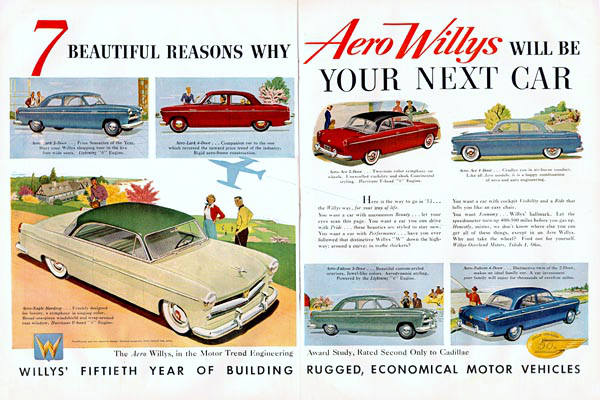 Various models of the new Aero Willys were designed and on the market by the time Kaiser Industries bought Willys in April 1953. The Aero joined the Kaiser automobile lineup of the luxury Manhattan (60K JPEG) and the economical Henry J (60K JPEG).

This advertisement from LIFE magazine, 25 May 1953, shows the Aero Willys range, from the basic Lark through the Falcon, Ace and top-of-the-line Eagle.


Although some export versions of the Aero used the 4-cylinder Hurricane, the domestic versions all had 6-cylinder engines: the flathead "Lightning 6", the F-head "Hurricane 6" and later the Kaiser "Super-Hurricane 6". For more details on engine availability, see the Willys Aero Survival Count website, a database of surviving Aeros.

In Jeep: The Unstoppable Legend, author Arch Brown describes the car as a "lightweight, unibody compact weighing just 2600 pounds and riding a 108-inch wheelbase. It was well-engineered and drew rave reviews. However, the Aero Willys sold for $150 more than a Chevrolet Bel Air hardtop." So its sales were barely respectable (see Willys Production Figures 1945-61) and by 1954, as Bill Munro says, "Henry J. Kaiser was finally forced to admit that the big three had licked him in the home market for passenger cars." (See also What Henry Kaiser Gave Up to Make Jeeps.) 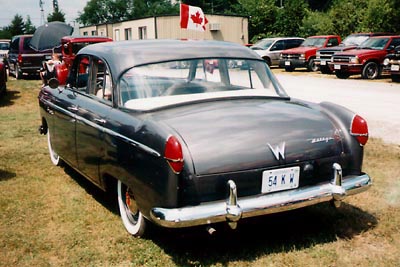 Designer Brooks Stevens, who worked on the development of nearly every new Willys vehicle from 1943 to the late-1960s, commented on the Aero in an interview with Arch Brown: "It and the Henry J were the forerunners of what they're selling now against the Japanese. Those cars were just premature at the time. You couldn't sell the damn things, then! They weren't dreamt up, necessarily, because of worrying about a fuel shortage. They were just construed to be practical cars."

The photos on this page show a 1954 Aero Lark Deluxe at a car show near Peterborough, Ontario. See also a photo of the interior (50K JPEG).

Would this have saved the Aero?

Jim Allen located a 1950s Willys drawing proposing a 4-wheel-drive car to be created by putting a CJ-5 drivetrain in an Aero body, raised three inches. Thirty years ahead of the AMC Eagle (80K JPEG).

Aero lived on in Brazil 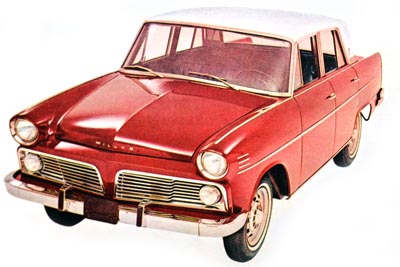 Tooling for the last Willys passenger car was shipped to Brazil, where the Aero received a Brooks Stevens re-styling in 1963. It was produced into the early 1970's as the Aero 2600 and the Itamaraty (40K JPEG) luxury version and Executive limousine.

See also Stevens' re-styling of the Willys Jeepster for Brazil, in Jeep Designers at Work.

See the Aero Willys in a legendary sports car film.

Elsewhere on the web, see Willys-Overland 1945-1955 from Hemmings Classic Car.