In the Saturday Evening Post of 11 April 1953, and a couple of weeks later in the 29 April issue of LIFE magazine, Willys introduced the CJ-3B, the new Universal Jeep, as part of their 1953 line of vehicles: 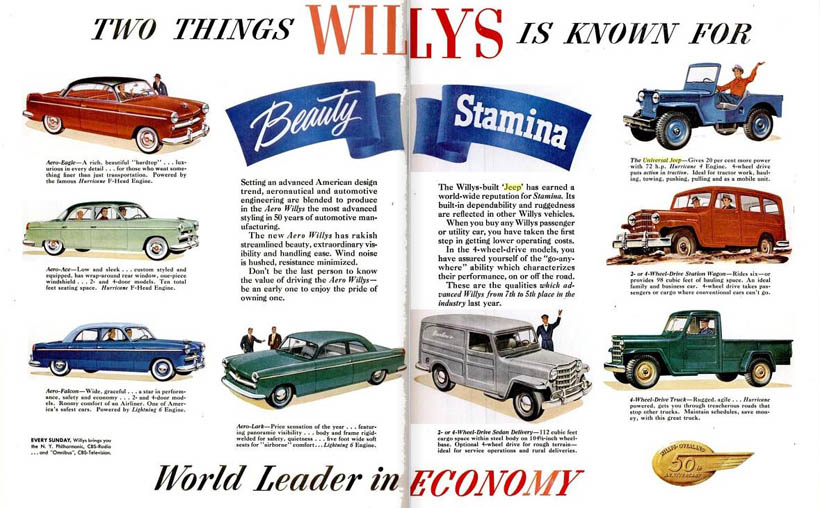 The ad is a treat, because not only do we get to see the whole lineup of Willys cars, trucks and Jeeps together, but the picture of the Universal Jeep is one that was used only briefly. It is in fact an inaccurate artist's rendering -- the hood is not as high as it should be. It is apparently a slight revision of the CJ-3A picture used in a similar 1952 Willys ad (200K JPEG) from the 29 September 1952 issue of LIFE.

A larger version of the CJ-3B illustration was used on a postcard advertising The Vehicle of Ten Thousand Abilities.

In searching through a number of issues of LIFE from late 1952 and early 1953, I also found a two-page advertisement for the Aero-Willys cars, from the economy Aero-Lark to the luxury Aero-Eagle, with no mention of Jeeps.

The Korean War was prominent in the issues of LIFE I went through. The widespread interest in new military technology to defend against the Red menace, resulted in a couple of pictures in LIFE which included military Jeeps. Ironically, the Jeep in the illustration of the new atomic cannon (40K JPEG) was an older flat-fender model, rather than the Army's new M38A1. (See photos of the actual M65 cannon in the Eisenhower Inauguration Parade on CJ3B.info.)

Likewise, the prototype all-terrain vehicle called the "Rolligon" was built around an old MB.

There was also a photo of a U.S. Forest Service Jeep getting pulled out of a snowbank by an Army "weasel".

Another appearance by a Jeep vehicle in a LIFE advertisement, was not an ad for Willys (20K GIF).

Thanks to Dave Christian and Ron Ingram for finding the Willys ads. -- Derek Redmond

One place that the Universal Jeep was being intensively advertised in 1953 was in farming magazines. See 1953 Farm Journal Ads for Willys ads from that journal and Successful Farming magazine.