What Henry Kaiser Gave Up
to Make Jeeps

In the early 1950s, Willys-Overland needed an injection of capital, which was provided by Henry J. Kaiser in 1953. For the next ten years Willys Motors would be a division of Kaiser Industries, until the decision was finally taken to turn it into Kaiser Jeep Corporation.


Meanwhile, Kaiser-Frazer had become the last new American automaker to attain large-volume production of passenger cars, building over 800,000 vehicles in the decade after World War II. Henry J. Kaiser had been hugely successful building ships during the war (as well as being a strong advocate of U.S. aid to refugees in Europe), but his attempt to take on the Detroit Big Three was fizzling out by 1953. See details on the merger of the two firms, creating the world's fourth-largest automobile company, in Kaiser Buys Willys on CJ3B.info.

After the merger with Kaiser Industries, the Willys division suffered a net loss of $35 million in 1954. But by late 1956, Business Week magazine reported the company had been turned around, although it did not publish any profit figures. ("Pulling Willys Off the Rocks", Business Week, 15 December 1956, pp.111-112.)

According to Norton Young's Willys-Overland Production Figures, over 11,000 CJ-3Bs were produced in 1956, representing sales of perhaps $15 million. With advertising and production of the new CJ-5 model in full swing that year, it seems likely that many of those 3B's were sold to export markets, and indeed Business Week estimated that 50% of a total of $140 million in sales by Willys in 1956 were from exports.

In addition to strong export sales, analysts credited the financial turnaround to Kaiser's decision to concentrate on production of Jeeps at the Toledo plant, while selling off other manufacturing facilities, including Kaiser's large Willow Run plant in Michigan (see Jeeps and Flying Boxcars on CJ3B.info.) And, they said, "The keystone of the whole new structure, of course, was the decision of the Kaisers, who bought Willys for an estimated $62 million, to take the company out of the passenger car business."

Henry J. Kaiser took not only Willys, but also his parent company, out of the car business in the US. Both Kaiser and Willys cars were built in Toledo alongside Jeeps for two years after the Kaiser merger in 1953, but the last Willys automobile was built in May 1955, and the last Kaiser was built a month later.

Bill Munro's book Jeep: From Bantam to Wrangler (Crowood Press, 2000) reveals that if not for the Kaiser takeover, a deal might soon have been signed between Willys-Overland and the Standard Motor Company of Britain, to build the new Triumph TR2 sports car in Toledo as the "Willys-Triumph". (And the CJ-3B and M38A1 would have been built in the UK.)

In the early 50's, a UK import duty of 30% on automobiles, as well as the cost of right-hand-drive conversion, prevented Jeeps from competing with Land Rovers. The import duty permitted the development of six successful automobile companies in Britain, known as the Big Six. Number 6, pretty much the Willys of the UK, was the Standard Motor Company, which was aware that the Willys CJ-3B was a successful update to a well-proven vehicle. Standard's chairman, Sir John Black, envisioned building the 3B in the UK for domestic sales, and for export to the British Commonwealth. 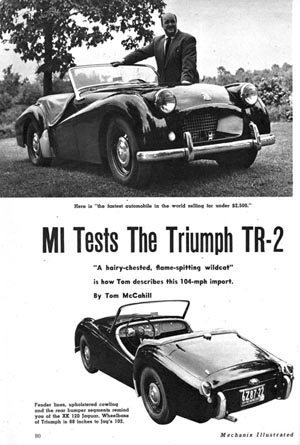 Standard also had a new sports car called the Triumph TR2, which would soon become quite successful. When Tom McCahill reviewed it for Mechanix Illustrated (left), he said, "With this uninhibited rig you can pass a flat-out MG with enough extra speed in hand to give the MG driver double pneumonia.... It is far superior to what I thought it would be. In fact, it is a great automobile, especially at the price which at present is $2,448..."

Sir John Black wanted to offer the Triumph to Willys-Overland for manufacture in the US, and in December 1952 he brought his TR2 to the United States for a meeting with Willys-Overland chairman Ward Canaday, to negotiate for the rights to the CJ-3B. They reached an agreement in principle, but apparently Canaday didn't tell Black that he was also having merger discussions with Henry J. Kaiser.

When Black heard about the possible Kaiser takeover, he broke off negotiations. He undoubtedly knew that Kaiser had announced a fiberglass sports car for 1953, and feared that any arrangement to sell his TR2 would be scrapped. Bill Munro suggests this happened during Black's return trip to England, but if so, he did not tell Canaday for some time. A 27 February 1953 article (80K JPEG) in the New York Times and a March 1953 memo (80K JPEG) located by Bob Westerman, from the U.S. Mission for Economic Cooperation in The Hague, indicate that Willys still believed that by the end of 1953, Standard would be building Jeeps in the UK.


Because the deal for Standard to build the CJ-3B fell through, very few Jeeps were ever sold in Great Britain, and Willys lost the Triumph. However, before long Willys would find itself selling the first mass-produced fiberglass sports car, and in fact the first sports car announced by any major American automaker (followed closely by Chevrolet's Corvette.) 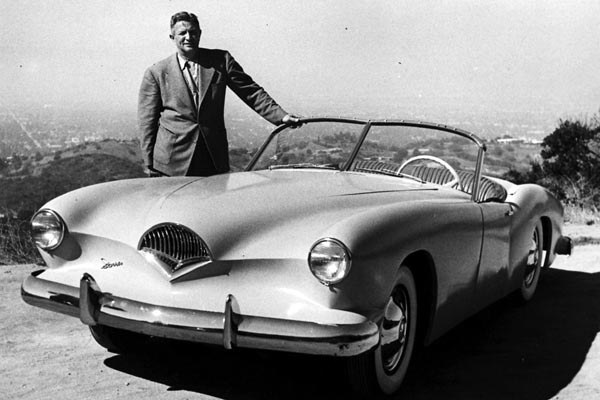 The final new Kaiser design was the Darrin 161 roadster. The prototype had been developed independently by designer Howard "Dutch" Darrin (right) in California.

Darrin had been involved earlier in designing Kaiser's compact Henry J (80K JPEG), but was unhappy with the final version of that car. So he decided to build his own roadster on the chassis of a Henry J, which handled well, had a low center of gravity, and was quick when equipped with the L-head six. (Photo courtesy Alden Jewell.) 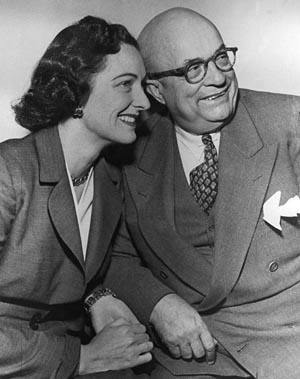 Reportedly Henry Kaiser was angry that Dutch had gone off on his own to design a Kaiser sports car. When Darrin showed him the first prototype in 1952, he did not like the roadster and was not interested in building it, but was persuaded that it had potential, by his second wife Alyce. It was decided that the first American sports car would go into production as the Kaiser-Darrin 161, although officially it would be a Willys vehicle.

Alyce was half Henry's age, and they were married soon after the death of his beloved first wife Bess in 1951. This raised many eyebrows, but they remained together until Henry's death in 1967. She asked him for a truck for Christmas 1958, and he gave her a pink Jeep FC-170. 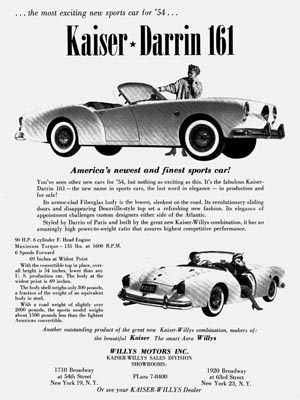 Promotional material published when the 161 finally went on sale in 1954, had this to say: "Its armor-clad Fiberglas body is the lowest, sleekest on the road. Its revolutionary sliding doors and disappearing Deauville-style top set a refreshing new fashion. Styled by Darrin of Paris and built by the great new Kaiser-Willys combination, it has an amazingly high power-to-weight ratio that assures highest competitive performance." 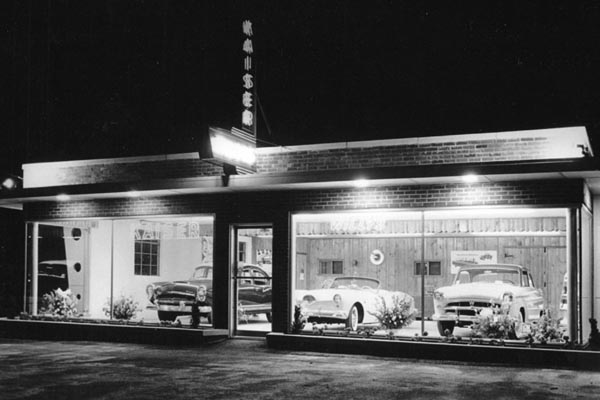 Total production of the Kaiser-Darrin was only 435. With a list price over $3600 (more than the new Corvette) many dealers were hesitant to order one. This photo of an unknown dealership shows the roadster on display in the showroom, with a Kaiser Manhattan (left) and an Aero-Willys. (Photo courtesy Alden Jewell.)

The Darrin Close Up 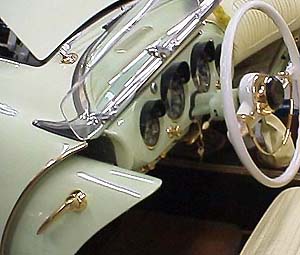 These photos of a Darrin 161 with customized gold trim, preserved in a private collection, were taken by Dave Hatch who describes some of the styling of the car as anticipating the '57 T-Bird. The sliding doors, patented by Howard Darrin, are evident in this shot of the interior. 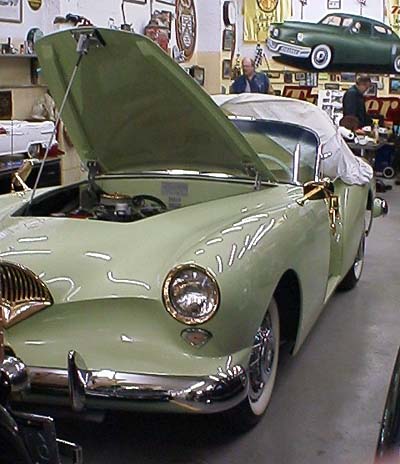 Howard Darrin was unhappy that the front-end styling of the production cars was changed slightly to raise the headlights. Parking lights and a one-piece windshield were other changes from the prototype seen above.

The Darrin was sold in four colors: light green, yellow, cream and red. 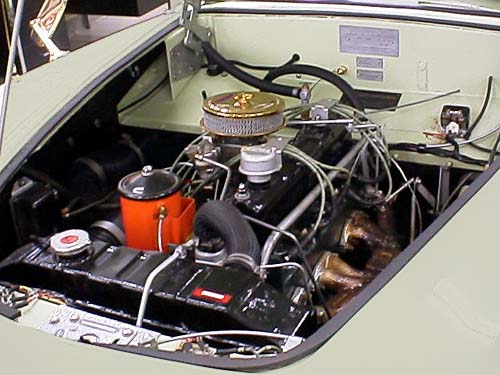 The Darrin was powered by a Hurricane 6 engine, although some were later given superchargers or even Cadillac V8s. (But the gold-plated air cleaner on this one makes even the F-head look slightly decadent.)

Jeeps Are Fun Too

The Jeep business looked healthy in 1956, not only because of exports, but because at the time, the Big Three automakers were not expected to get into competition with Willys in the market for small four-wheel-drive vehicles. Business Week noted that the only significant competitor was International Harvester. This market position had helped make it possible for Willys to nearly double the number of dealers selling Jeeps full-time, to 1700 dealers in North America. The Business Week article was illustrated by a photo of the new Forward Control FC-150 truck, which had been released earlier in that same week in 1956. 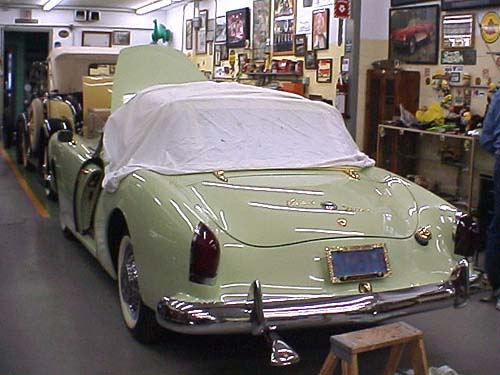 Henry J. Kaiser saw the writing on the wall, so he did his corporation a favor (and did us all a favor) by saving the Jeep name from an uncertain fate. But he must have had a few moments of regret as he gave up on the last of the Kaiser automobiles.

Thanks to Dave Hatch for the photos, and Reed Cary for finding the Business Week article. -- Derek Redmond

Also on CJ3B.info, see a Darrin promoting a world movie premiere, in On the Line in Toledo.

Elsewhere on the web, see Dressed to Kill: The 1954 Kaiser Darrin by Aaron Severson, and many detailed articles on the Darrin at Forgotten Fiberglass.

Last updated 10 May 2017 by Derek Redmond redmond@cj3b.info
https://cj3b.info/Siblings/Kaiser.html
All content not credited and previously copyright, is copyright Derek Redmond