Aero Willys and 3B in the Movies

I heard years ago that there was a Jeep CJ-3B in Johnny Dark, the legendary 1954 film about sports car racing. This sounded very promising, but since the film is not in release on home video, it took me a long time to get my hands on a copy. As it turns out, the CJ-3B appearance is very brief, but there is another surprise of interest to Willys fans. 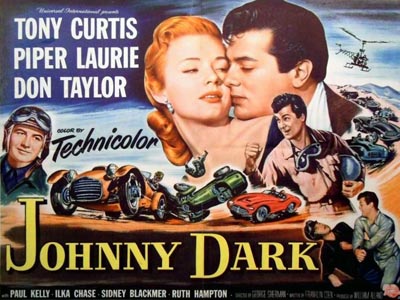 The plot follows automotive design engineer Johnny Dark (Tony Curtis), who builds a prototype of a new sports car for his employer, Fielding Motors. When the owner refuses to sponsor the car in a Canada-to-Mexico road race, Johnny steals the car with the aid of the owner's granddaughter Liz Fielding (Piper Laurie), and runs the race against the favored driver, his ex-buddy Duke Benson (Don Taylor).

The film is legendary for the road race which makes up the second half of the film, including some exciting driving sequences and a number of rare early American sports cars. 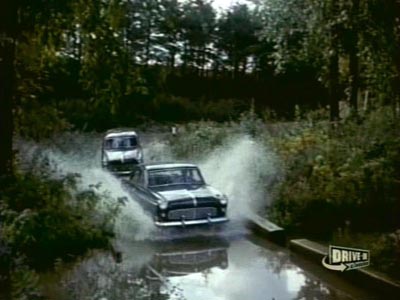 But the surprise for Willys fans is the opening sequence of the film, which shows two "Fielding Motors" sedans out on the test track. They look vaguely familiar and we soon realize that they are in fact Aero Willys sedans. The Willys front grilles consisting of a single chrome bar and a large "W" have been replaced with a series of horizontal slots, which at first make the cars look vaguely European, something like a 1953 UK Ford Consul. A chrome strip has also been added to the centerline of the hood. 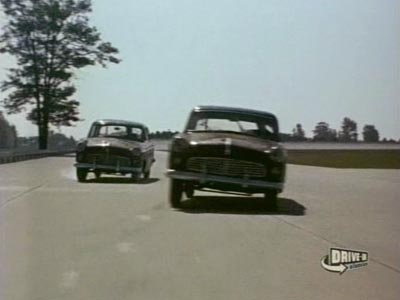 The Aero Willys was probably chosen to be the Fielding in the movie because it had only been around for a year, and was less familiar than many other automobiles might have been to audiences. Also perhaps because the custom sports car chosen to play the Fielding prototype (see below) actually had Willys parts including Aero taillights. The two examples in the opening scene appear to be painted Raven Black and Woodstock Green.

Johnny and Duke are testing the steering on the Fieldings, and Johnny talks to his boss on the 2-way radio (40K JPEG) while driving. Soon after, he swerves and runs off the track. 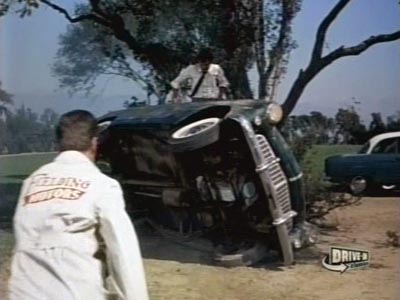 When the mechanics rush over to the crash site, we find the car on its side and Johnny climbing out. A quick look at the underside and he finds the problem: "The Pitman arm -- a clean break!" (50K JPEG). What's really unusual though, is that the grille now has vertical slots!

As Duke gets out of his car (40K JPEG), we get a good view of the rear of the Aero rebranded as a Fielding. The car's four doors and wraparound rear window mark it as a Hurricane 6-powered Aero-Ace. Its 1953 Ohio license plate suggests some of this was shot at the Willys test track in Toledo. Publicity material for the film states that the track was the Packard Proving Grounds in Utica, MI, but that was probably second-unit footage of the cars, while the actors were shot when the cast was on location at the Willys plant (see On the Line in Toledo.) 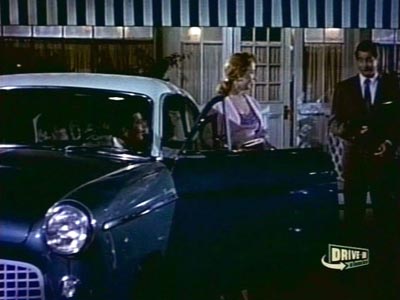 Possibly the same car seen in the background of the shot above, this Admiral Blue 2-door Aero driven later in the movie by Liz Fielding, looks like a top-of-the-line Aero-Eagle. It's been given yet another variation of the Fielding grille, with a crosshatch pattern. 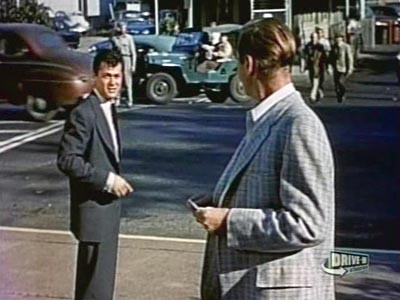 When Johnny and Duke chat briefly outside the Fielding plant at quitting time, I spotted the CJ-3B in the background. It's hardly noticeable, and seems coincidental rather than an intentional product placement for the new 1953 Jeep. After years of waiting, this brief appearance was a bit disappointing for me, but the CJ-3B's siblings the Aeros made up for it. And of course the sports cars which appear later in the film. 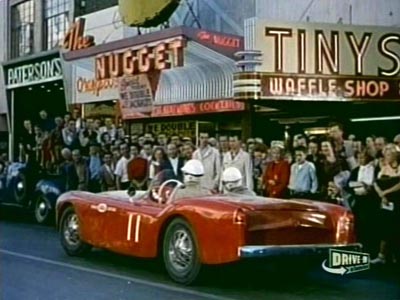 Johnny's car is dubbed the "Idaho Special" but is played by the Willys-powered Woodill Wildfire, a very limited-production fiberglass sports car handbuilt in Los Angeles from 1952 to 1956. It's seen here in Reno, Nevada, one of the overnight stops in the road race (see also a front view, 60K JPEG.)

The Forgotten Fiberglass website has lots of information on this car and a number of others used in the film. There's also a video trailer, and background on the shooting of the race scenes. 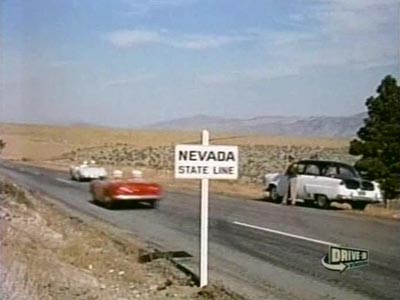 The tagline for Johnny Dark was "A story of fast cars...reckless women...and sudden danger...and a guy who loved all three!" The plot is pretty thin, but the driving in the mountains and the desert lives up to the billling. (Unfortunately the closeups of the actors playing the drivers were done with rear-screen projection in the studio.)

See more on the shooting of Johnny Dark in On the Line in Toledo on CJ3B.info.