There is a lot of speculation about military CJ-3Bs built by Willys in the 1950s and early 60's, and by Kaiser Jeep in the mid-60's. How many were built for the U.S. military and for foreign aid or foreign sale, what were their distinctive features, and which ones were known as the M606?

Military Jeep serial numbers collected by Harold West confirm the suggestion on the M606 Specifications page that CJ-3Bs from the regular assembly line were used to fill military orders, with minor changes made.

The 1964 U.S. Navy CJ-3B (above left) restored accurately by Joseph Caprio, has a ventilating windshield but does not have other M606 options. The 1966 M606 in Argentina (above right) belonging to Luis Mariano Paz has 16-inch wheels and blackout lamps.

"M606" may simply have been a Kaiser Jeep designation for a CJ militarized for foreign sale, as opposed to a design created to U.S. military specs. Jim Allen in his Illustrated Buyer's Guide: Jeep (see the CJ-3B Bookshelf) says that although the U.S. military bought CJ-3Bs off the assembly line, the M606 designation applies to units built in the 1960s for the Mutual Defense Assistance Program (90K JPEG) or MDAP, designed to provide friendly countries with military equipment. 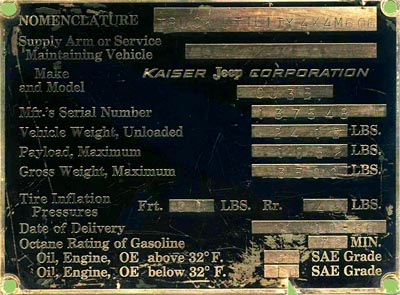 Walter Snelling has done a good deal of research on military CJ-3Bs, in the course of preparing to restore his own U.S. Navy Jeep. He concludes that the M606 classification described by Kaiser Jeep in their Service Manual Supplement To SM-1002-R5 Model M606 refers only to Jeeps built for export. (See the M606 Specifications page for details of the Supplement.) He has found no evidence of Jeeps built with these modifications being used by U.S. services. 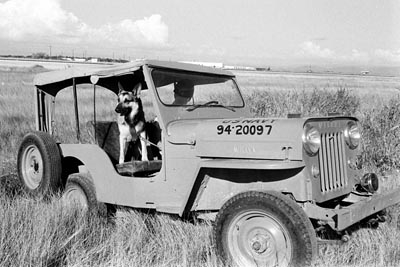 This photo from the LIFE magazine archive at LIFE.com showing a U.S. Navy CJ-3B at Guantanamo Bay, Cuba in 1961, was taken by Dmitri Kessel, probably on his way to Bolivia.

In U.S. military service, the CJ-3B appears to have been used primarily by the Navy, and been painted grey. However, a base coat of olive drab is found under the grey on some examples, and examples have turned up with Army and Air Force markings. 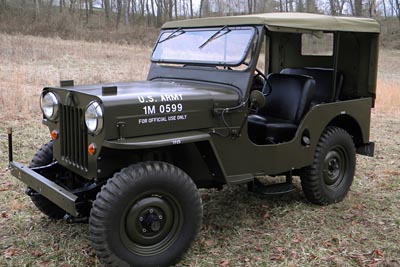 This 1964 U.S. Army CJ-3B was restored by Dan Walton in West Virginia.

Its nomenclature plate (50K JPEG) does not identify the "supply arm or service maintaining vehicle," which suggests that Jeeps procured under this contract with Kaiser Jeep would be split in an undetermined way between the Army and Navy. 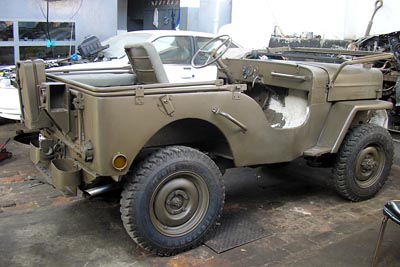 Most known examples of the M606 date from the mid-1960s, after the publication of the M606 Service Manual Supplement. Were CJ-3Bs ever built with military options prior to that? This M606 restored in Paraguay by Jose Morinigo appears to be a mid-1950s model, based on the dashboard layout. The history of the Jeep is currently unknown. See also the left side (200K JPEG).

Walter comments, "As result of reviewing as much information as I could find, I have concluded that my Jeep is a good example of an early Navy CJ-3B. For what it is worth, I now firmly believe that our government never used M606s, but only CJ-3Bs. For me the most convincing data was that different M classifications for various Jeeps were used just for export. The same classification system is also found in the Dodge Power Wagons used by our Government and exported. I believe the problem is that many people like to think of their military CJ-3B as having a more typical military classification. I know I fell into that group."

More questions, or answers to any of the questions above, are welcome. I am also particularly interested in finding information about CJ-3Bs which may have been used by the Royal Canadian Air Force, the Royal Canadian Navy, and the U.S. Air Force. (See Art Sesso's re-creation of a USAF CJ-3B.)