Because it is relatively rare as a military vehicle, the CJ-3B (or M606) is one of the few Jeeps which doesn't have its own category in Military Vehicle Preservation Association (MVPA) vehicle judging. However, at the 1998 MVPA Convention in Tobyhanna, Pennsylvania, Second Place in the "Other Post-War Restored" Class went to a 1964 Navy CJ-3B owned and restored by the late Joseph Caprio of Lock Haven, Pennsylvania. (First Place went to Rod Brown's 1986 AM General HMMWV 1-1/4-ton).

As the MVPA newsletter commented, "Restored Class vehicles are those which appear to be factory fresh.... They are often near-perfect museum-quality vehicles. The vehicles are judged by recognized experts in each category of vehicle, most of whom have been award winners at previous MVPA Conventions." 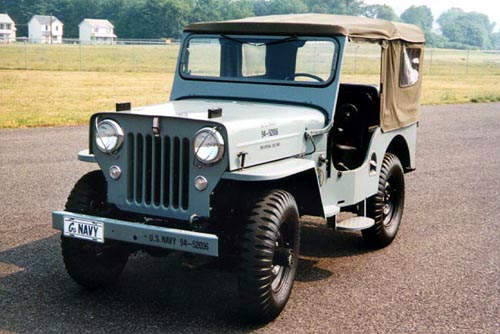 This Jeep was delivered to the U.S. Navy in February 1964, and was sold as surplus by 1972. Flooded in June 1972 by Hurricane Agnes, it was later owned by the Troutrun Volunteer Fire Department in Troutrun, Pennsylvania, and eventually acquired by Joe Caprio.

The brass Navy data plate on the dash carries the following information: 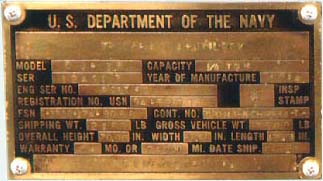 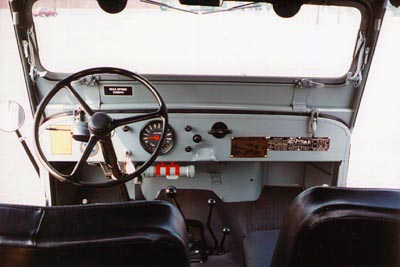 The Jeep has a fold-out windshield, windshield washers and seatbelts, but no heater and no rear seat. The standard Jeep information plate (with the Kaiser name replacing the Willys name) is on the dash beside the Navy data plate. Also on the dash are a sticker saying "Max. Speed 50 MPH" and a yellow decal with Kaiser warranty information. 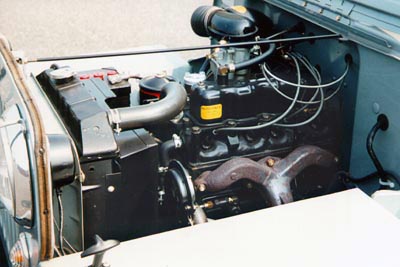 The Jeep has a standard CJ-3B drivetrain, F-head engine and 12-volt system. Joe refers to it as a CJ-3B rather than an M606, both because it does not have the modifications listed in the M606 Specifications, and because it was not built for foreign aid. Joe agrees with the interpretation of the term "M606" as a Kaiser designation for Jeeps intended for foreign military use. (See Military High-Hood Questions.) 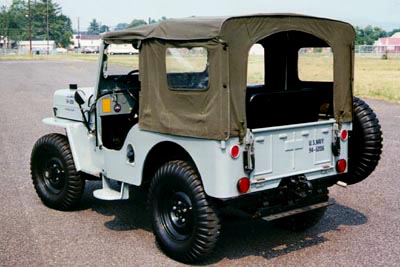 The Willys name is not stamped on the grille, hood or tailgate, which apparently was standard by 1964 not just for military Jeeps but for all Kaiser Jeeps. This Jeep, like some other Navy Jeeps, may have originally been painted by Kaiser in Olive Drab, which shows below the fenders and bumper. Painted on the hood is "U.S. Navy 94-52016 For Official Use Only".

Thanks to the late Joe Caprio for the information and photos of his award-winning Jeep, which has now been sold. Thanks also to Walter Snelling. -- Derek Redmond

See another former 1964 Navy CJ-3B with serial and registration numbers very close to this one.

Also on CJ3B.info, see the story of Joe Caprio's CJ-3A in From Broadway to Halfmoon Valley Road