This is one of those pages I've basically devoted to one photograph; it's what I often do when a unique photo turns up which is of both historical significance and good visual quality. This is one of the few pictures I know of showing a CJ-3B Jeep in service with the U.S. Army.

Military Policeman Joe Gillam was photographed beside his CJ-3B in Massawa, Ethiopia (now in Eritrea) in 1965. 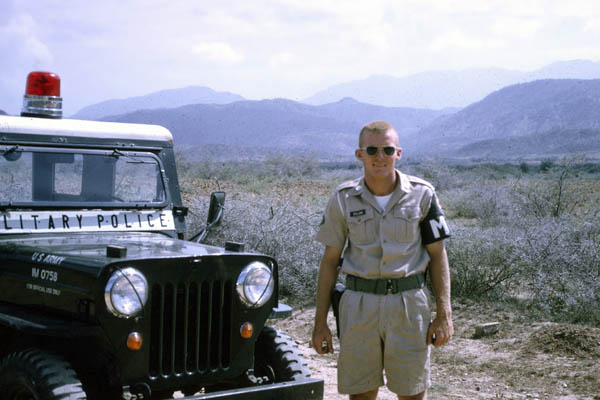 Joe recalls, "I was stationed in Asmara, Ethiopia from 1964 to 1968. At the time there were about 10,000 U.S. forces there, representing all four branches of the service." (Note: see Eritrea beside the Red Sea on a map of Northern Africa and the Middle East, 240K JPEG).

"The MP Company had about 8 of the CJ's along with some Ford Fairlanes for patrol. This Jeep, 1M-0758, was assigned to me and my partner in the two-man MP detachment at the port and R&R center on the Red Sea, at Massawa, 90 miles and 8,000 feet down from the mountain plateau where the main company and Army post was located in Asmara."

Joe also reports, "The CJ's were very trusty vehicles. We patrolled mostly on the road, but they would do just fine on the sand or driving on the beach. I never got stuck. Top speed was in the 70 mile-per-hour range and they cruised just fine around town in second gear at 25 or so miles per hour. We ran the fleet up to well over 100,000 miles and they were replaced by a fleet of Chevy pickups that were set up something like you see with the Mexican police of today. The guys were sad to see the CJ's go."

This photo confirms some details seen on surviving U.S. Army CJ-3Bs , including headlight guards, chrome headlight bezels, ventilating windshield, large side mirror and Koenig steel hardtop. It also shows front tow hooks and glossy paint. The white paint on the roof of the hardtop makes a lot of sense in Massawa, which has reportedly been called the "hottest place in the world" by the National Geographic Society (see Berkeley Daily Gazette, 11 August 1930, 180K PNG.)

I also remembered Massawa's other claim to fame, as one of the stops on the last trip of Amelia Earhart, who landed there on 21 June 1937, before disappearing on 2 July in the South Pacific. An original photo shows Amelia Earhart standing next to the cockpit of her Lockheed Electra plane in Massawa, stop number 17 on her Circumnavigation Attempt. 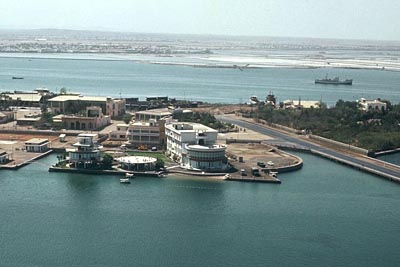 This photo by Patrick Striplin shows the Massawa R&R center in the early 1970's (courtesy KagnewStation.com.) The original U.S. Army Massawa R&R Center, located in a hotel built by Italians in Massawa in 1937, closed in 1963 and was replaced by this new Red Sea Rest Center, maintained by the TTU, Transportation Terminal Unit.

Kagnew Station was a huge Cold War electronic listening station at Asmara, nearly on the equator and at an altitude of 7,300 feet (2200m) above sea level, an ideal site for its 2500-acre (10 sq km) antenna farm. (Wikipedia) 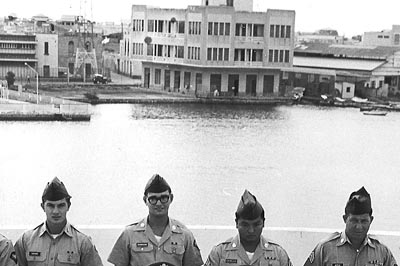 A photo submitted by Terry Nelson to KagnewStation.com shows the military staff at Massawa TTU, circa 1970. In the background is what appears to be a high hood Jeep, which Joe Gillam speculates is a former military Jeep sold off for civilian use. See the full photo (360K JPEG). 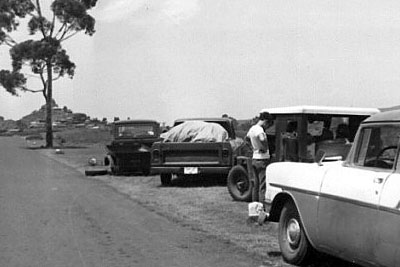 Another early-70's Kagnew Station photo by Mike Durbin shows a road trip from Kagnew into the surrounding country. The high hood Jeep here, with hardtop and white roof, also seems very likely to be one of the MP Jeeps, sold or retired for recreational use. 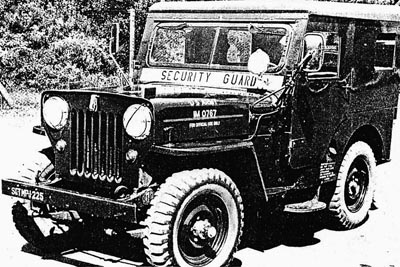 This photo, date and location unknown, shows a CJ-3B with hood number 1M-0767, very close to the MP Jeep above. It has a similar configuration, with the large mirrors, white roof, and white windshield stripe, but oddly it's marked as "Security Guard." Anybody recognize this?


Thanks to the Kagnew Station Homepage, and to Joe Gillam for his 1965 photo. I hope that publishing it here will encourage the appearance of other old photos hidden in attics or family albums, which may further document the Army's use of the CJ-3B. -- Derek Redmond