For years I have been looking for photographic evidence of Jeeps, and in particular Canadian-built CJ-3Bs, on board ships of the Royal Canadian Navy. Alex Houle suspected his 1964 CJ-3B had been on a Canadian aircraft carrier, so I kept an eye open.

The closest I had found until 2011 was a photo of a group of Canadian M38A1s (50K JPEG) awaiting transport overseas on the aircraft carrier HMCS Bonaventure in January 1970 (DND Canada photo.)

But in late 2011 Mick Broomfield in Australia sent this photo from the State Library of New South Wales. Just the one photo, but since we had waited so long I thought it deserved its own page. I hope it won't be too long until we find more information, and possibly pictures, to add to this page. 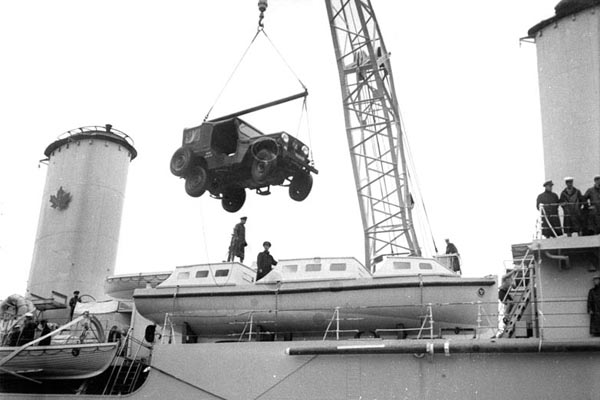 The picture was taken by Mick Toohey of the Australian Photographic Agency, at Garden Island, Sydney, Australia. It shows Royal Canadian Navy light cruiser HMCS Ontario loading to leave for New Zealand on 26 February 1955. And there, being lifted on board, is a CJ-3B.

Even in the large copy of the photo (80K JPEG), the details aren't clear, but it appears to have "RCN" and a number stencilled on the side, and a badge mounted on the front grille. The badge could be the Navy crest, or it could be HMCS Ontario's own badge, seen here. 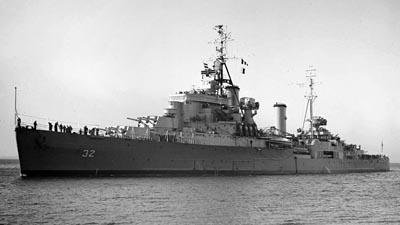 The Ontario was one of the largest ships ever to sail in the Canadian fleet. The light cruiser was built in Belfast during World War II for the Royal Navy as HMS Minotaur, and transferred to the Canadian Navy and renamed Ontario near the end of the war. She sailed to the Pacific Theatre but was too late to see action, and was subsequently used for training duties in the Pacific until being retired in 1959 (see Naval-History.net).

This 18 April 1951 photo by Allan C. Green is from the State Library of Victoria. 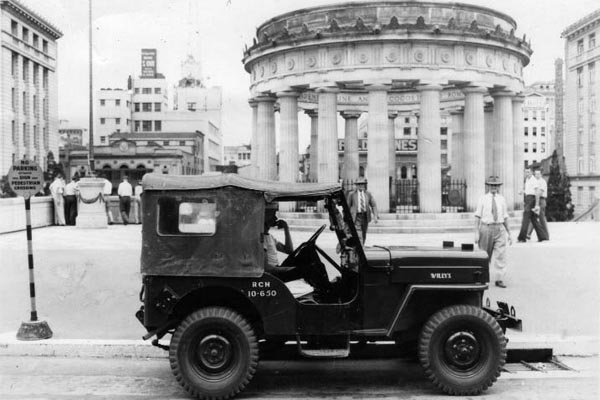 This undated Canadian National Defence photo shows a CJ-3B with an RCN number and a driver who appears to be a sailor.

The photo was identified as being taken in London, England but it actually shows the First World War Memorial at ANZAC Square in Brisbane, Australia.

So possibly this is the Jeep seen above on HMCS Ontario, although Don Glindemann says records show the cruiser's last visit to Brisbane was in 1955, and the dashboard in this photo looks like a post-1957 CJ-3B.


Any more information regarding Jeeps on Canadian naval vessels is welcome.

Note: the flag at the top of this page is the pre-1957 version of the Blue Ensign, a naval jack flown by RCN ships in port (see HMCS Ontario in Portsmouth, England, 60K JPEG courtesy of Barry Lake and MaritimeQuest.com.) At sea they flew the same White Ensign (20K JPEG) as Britain's Royal Navy, until 1965.

Thanks to Mick Broomfield and Federico Cavedo for finding the photos. By the way, the ship's bell of HMCS Ontario is currently on display at the HMCS Ontario Sea Cadet Training Centre in Kingston, Ontario (home of CJ3B.info.) -- Derek Redmond