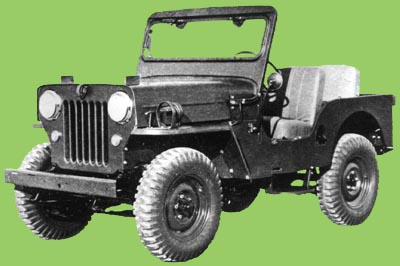 It's hard to find information on the M606 military version of the Willys CJ-3B Universal Jeep. The M606 designation does not even appear in some lists of US military vehicles, and it may have referred primarily or exclusively to Jeeps built for overseas military aid or sale. (Kaiser Jeep used the model number M606A2 and M606A3 to refer to military export versions of the CJ-5.)

It seems fairly clear that the M606 was pretty much just the CJ-3B straight off the assembly line, with the same serial numbers as the civilian version. The military version took the heavy-duty options like larger tires and springs, and added a few features (listed on the conversion specs sheet below) including a blackout lamp on the front left fender.

Some CJ-3Bs purchased by the U.S. Navy at least, did not have the military blackout and marker lamps, and were not referred to as M606s (see the photos here, originally published in the Japanese military Jeep journal J4, vol.4, 1998.)

I have been told by mil-veh collectors and former servicemen that the CJ-3B was generally used by the U.S. military in non-combat roles such as Shore Patrol, which may have been the role of this 1963 Navy CJ-3B, painted in semi-gloss gray.

The rear view shows bumperettes and plain tailgate, as well as the lack of M606-style taillights and pintle hook. The foldout ventilating windshield glass is usually seen on military 3B's, but is an option that is not unique to the military Jeeps.

For further discussion of the details of military CJ-3Bs and M606s, see Military High Hood Questions on CJ3B.info.

Blackout Driving Light: according to the Supplement, a blackout light was installed on the left fender only.

Magnetic Drain Plugs: intended to attract small bits of metal so they can be removed when fluids are changed, these plugs were installed in oil pan, transmission and transfer case.

Stop and Tail Lights: body-mounted reflectors, and blackout covers for the tail lights.

Pintle Hook: trailer towing hitch. A picture also shows rear "bumperettes" on either side of the hitch.

Thanks to Danny Hartling for supplying a copy of this Supplement, which has been reproduced by Portrayal Press.

For full CJ-3B specs, some of which differ slightly from the M606, see CJ-3B Universal Jeep Specifications.