It's a nice change to see archival photos from South America of civilian Willys Jeeps, instead of military M606s sent from the United States under the Mutual Defense Assistance Program. These gems found by Federico Cavedo in the LIFE Archive are from a series of photos taken in the city of Santa Cruz de la Sierra, Bolivia in 1961. Click any of the pictures to see high-resolution copies. 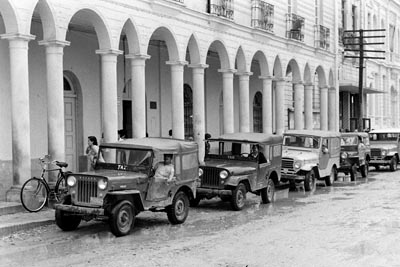 This photo shows that various models of the Universal Jeep were represented in the Santa Cruz taxi fleet; a CJ-3B, CJ-5 and CJ-2A are visible. But the Jeeps did not have a monopoly; there are also several early Toyota FJ Land Cruisers.

The FJ of the late 1950s was becoming one of the first big export successes for the Japanese auto industry. It had developed out of the Toyota BJ (70K JPEG), which appeared in 1951 and strongly resembled the Willys MA. But as Mitsubishi started producing Willys Jeeps under license in Japan, Toyota realized it would have to switch to horizontal grille slots and stop calling the BJ a "jeep". 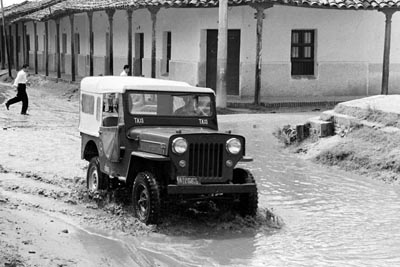 Santa Cruz de la Sierra was a small town starting to grow very quickly as a result of resource development and new highway and rail links, when these pictures were taken by LIFE photographer Dmitri Kessel in April 1961. It continued to grow so fast that in 2010 Santa Cruz had a population of over 2 million people, about the same as the metropolitan area of La Paz, Bolivia's capital city.

But the large puddle being forded by this CJ-3B taxi suggests that in 1961 Santa Cruz was still more small town than big city. 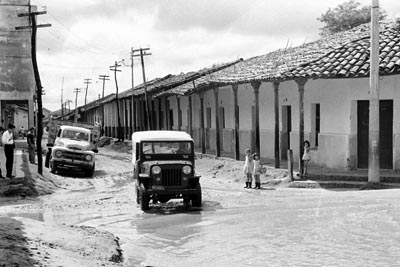 This shot, taken a few seconds earlier by Kessel as the Jeep entered the puddle, shows two little girls in the background, who appear to be uncertain about venturing into the water and mud, despite their rubber boots. The large copy of the photo (220K JPEG) also includes another Jeep on the cross street. 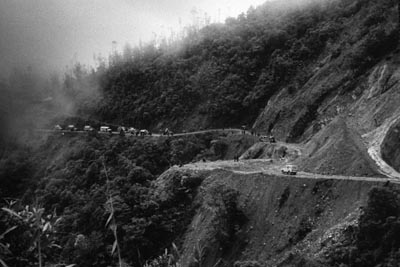 The value of Jeep taxis in Bolivia is obvious when you see this shot of a highway winding along the edge of a cliff. The LIFE archive does not record exactly where Kessel took this picture. It could perhaps be the Yungas Road north of La Paz, christened the "World's Most Dangerous Road" in the 1990's after a study revealed its high number of traffic deaths (reportedly hundreds annually.) Also called the "Road of Death," it remains popular among mountain bikers and Jeep thrill seekers, as it descends nearly 11,800 ft. of altitude in just 40 miles of cliff-hugging hairpin turns. 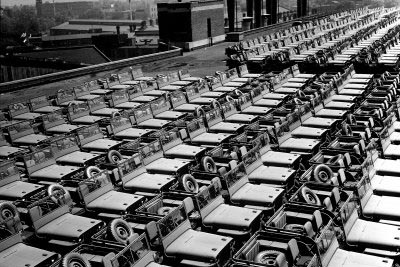 Photographer Dmitri Kessel had already taken plenty of pictures of Jeeps in his career, including this famous wartime shot of Willys MB's lined up at the factory in Toledo, ready for shipment to front lines around the world.

According to The Independent, Kessel was born in Russia in 1902 and had an early interest in cameras. By 1925, he had emigrated to New York, where he studied photography seriously. In 1942, Kessel became a war correspondent for LIFE magazine, and in the post-war years travelled the globe for LIFE. He retired to Paris, and then returned to New York, where he died in 1995. 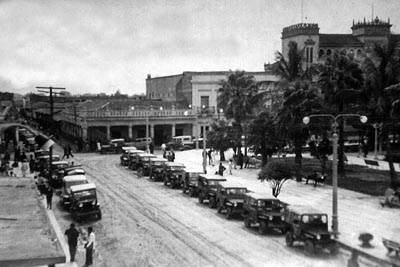 Here's another photo with a whole bunch of Jeeps, but it was not taken by Dmitri Kessel. This print comes from the archives of the Willys Club of Santa Cruz, and it shows taxis lined up beside 24th of September Park, named for the date when the battle for independence from Spain began in 1810.

Exactly when this wonderful picture was taken is unknown, but it was likely a few years earlier than Kessel's 1961 assignment; there are no Land Cruisers in evidence here (although there's a Willys wagon and maybe a Land Rover) and there are some automobiles in the background which appear to be pre-war. 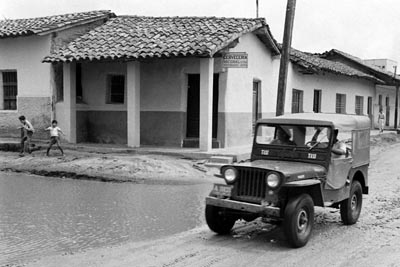 One last 1961 shot by Dmitri Kessel shows a CJ-3A passing another of Santa Cruz's puddles. The picture tells a great little story, as a pair of young boys toss mud clods at the passing Jeep, and the driver gestures threateningly. The large copy of the photo (200K JPEG) also includes a Willys pickup in the background.

None of the Jeep photos made it into Kessel's article in the 30 June 1961 issue of LIFE, titled "A Tormented, Grim Land." The text was largely a warning that militant miners' unions were threatening the social reforms achieved by Bolivia's democratic revolution of 1952. 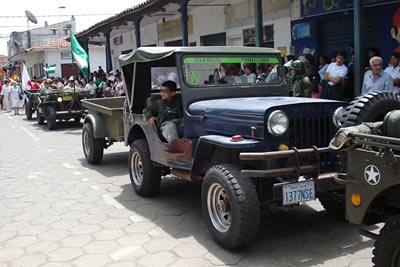 The city of Santa Cruz de la Sierra clearly has a great Willys heritage, and fifty years later the Willys Club of Santa Cruz has been participating in shows and parades during 2010, building momentum for a huge Jeep caravan they held on 25 September. 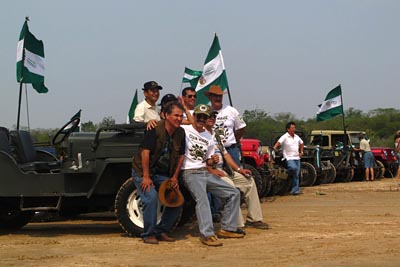 Over 100 Jeeps turned out for the Bicentennial Caravan which wound its way through Santa Cruz and helped celebrate the 200th anniversary of the struggle for independence from Spain.

The jerry can racks on the cowl of the CJ-3Bs in these photos, suggest they're not former taxis, but surplus military M606s, similar to those found in Argentina. 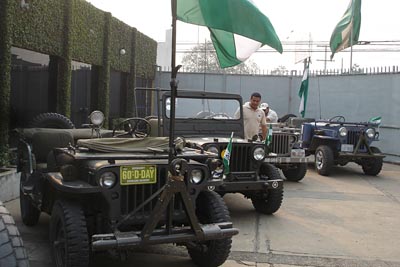 The green and white flag seen everywhere during the Bicentennial, was created for Santa Cruz in 1864, but fell into disuse until it was revived in 1980. It symbolizes a strong sense of independence in this eastern part of Bolivia, although the region remains part of the nation. The flag flies here from a pair of MB's, an M38, and an M606.

Thanks to Federico Cavedo for his research, and Jim Gregor for comments. Flags courtesy of António Martins and Flags Of The World. -- Derek Redmond

Search the LIFE archive at LIFE.com.