Dr. Art Sesso has taken the initiative and spent years doing the research and labor, to produce a CJ-3B restoration that many people have thought about undertaking, but to my knowledge has not yet been done by anyone else. This 1954 Jeep is now a detailed recreation of a USAF vehicle stationed at Offutt AFB in Nebraska, headquarters of the Strategic Air Command. I hope it will help to inspire other people to go ahead with Air Force CJ-3B projects in the future. Here's Art's description of his project. -- Derek Redmond 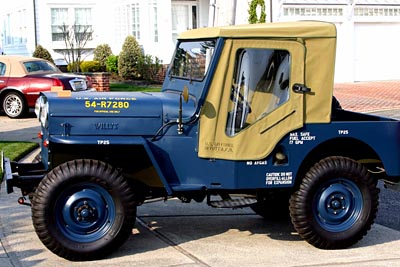 I am a surgeon in the Philadelphia area, and I have had a passion for military vehicles since I was in medical school, when I found a 1942 Ford GPW in a local junkyard. Over the years I have restored an M151A2, an M38A1, a Mule, an M-37 and a T-24 Weasel. I have always had a desire to restore a CJ-3B, but wanted something different from the usual olive drab vehicles. I decided, after catching a glimpse of a 3B in a movie about the U.S. Air Force, to do an Air Force CJ-3B. 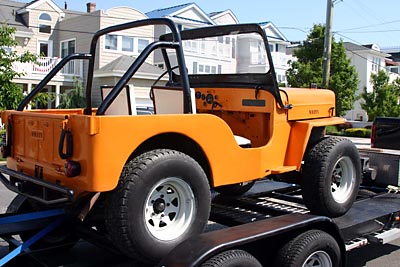 The 1954 Jeep was purchased sight-unseen from Craigslist. This was absolutely the wrong way to go about buying a vehicle, but the price was right so I took the chance. The Jeep was in horrible condition; it ran but only by sheer luck. The rear springs were flat, the tires and wheels incorrect, wires were hand twisted together, and the windshield was a large sheet of plastic cemented to a rusted frame. The front of the frame near the bumper had been torched off, and the rear cross member totally rusted through. The seats were home made out of angle iron. 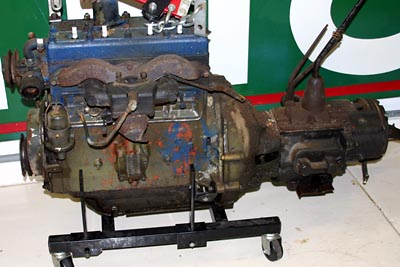 The engine was not the correct Hurricane motor but a Willys generator motor (right). The transfer case had been cracked and repaired using epoxy. The master cylinder was bone dry and the steering column shortened by several inches. Several brake lines were damaged and the gas tank had a few extra holes. At this point the logical next move was to pay someone to haul it away! 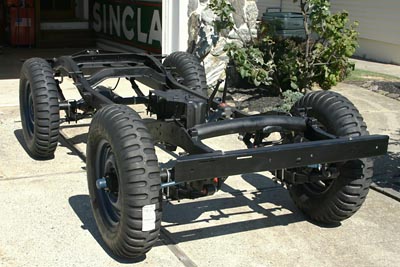 After walking past it in the garage for several days, the good points started to show. The frame was straight (90K JPEG) and definitely repairable. The front sheet metal, grille, fenders and hood were in very good condition. I had access to an NOS windshield, and the instruments were all original. A decision was made to go ahead with a frame-off restoration. Everything was disassembled, and all frame holes, many with broken bolts, were drilled out and re-tapped. 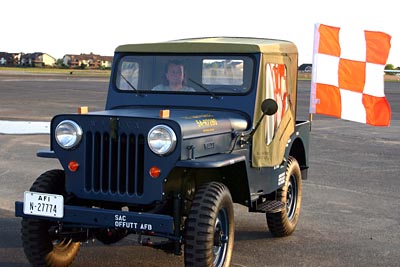 I was fortunate to live near George Baxter's Army Jeep Parts store, and after many trips for mostly NOS parts I had a good looking CJ-3B. I found and rebuilt a Harrison heater complete with an original switch. CJ3B.info was a great help. There are still some things I have to do (I found an NOS set of parking lights).

The canvas was provided by Beachwood and the "Strata Blue" paint came from Rapco. 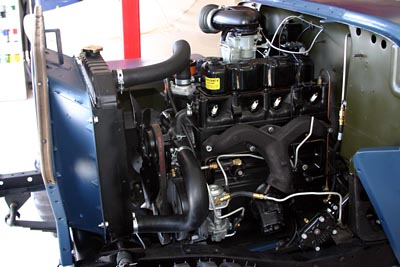 The Jeep after two years started on the first flip, but I ran into a problem with an NOS distributor rubbing on the cap because its shaft had been machined a few millimeters too long. Another NOS distributor was found and the Jeep was on the road. 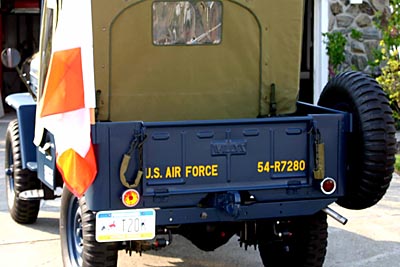 I researched the markings on the Internet, at the Wright-Patterson Museum in Ohio, the National Air and Space Museum in Washington DC, and the Strategic Air Command Museum in Nebraska.

The best searches were for pictures of SAC bases which show B-36's and B-47's on the flight line. These pictures often show Jeeps and other support equipment. I looked in several preserved Air Force periodicals of the period, and studied past issues of Military Vehicles magazine. Movies like Strategic Air Command and A Gathering Of Eagles also show many vehicles in this scheme. 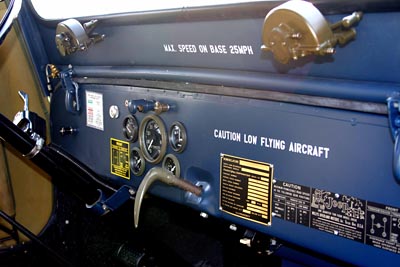 My vehicle represents a CJ-3B originally procured from the Army, as was a common practice for the Air Force. The vehicle would then be painted Strata Blue, but the engine compartment and undersides would remain in semi-gloss OD. Many add-on parts would also be in semi-gloss OD such as instruments, seat frames, etc. The dash would have the civilian data plate as well as the military specification plate. -- Art Sesso 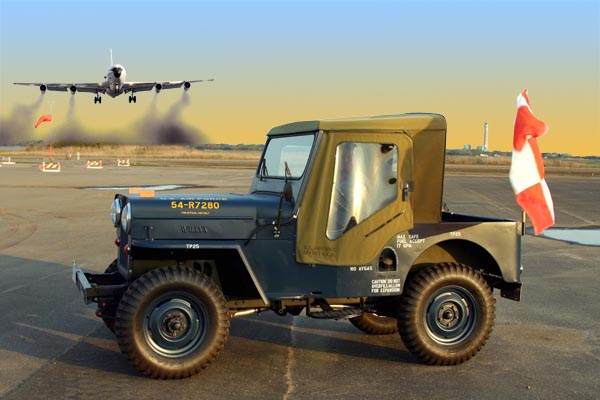 Note from Derek: The CJ3B.info cover page photo from May 2010 is my simulation of what things might have looked like at Offutt AFB in 1969 as one of the new Cobra Ball RC-135S reconnaisance planes took off. The CJ-3B on a maintenance call at the end of the runway had been in active service for years, but was kept in beautiful condition by the motor pool.

The Cobra Ball RC-135S, outfitted to track ballistic missiles, is one of several versions of the RC-135 electronic reconnaissance aircraft, based on the Boeing C-135 Stratolifter. As of 2020, the RC-135 fleet at Offutt is still an important source of strategic and tactical intelligence for the U.S. military. (Strategic-Air-Command.com)

Thanks to Art for the photos, and the story of his unique restoration. -- Derek Redmond

The only photos I have seen to date of an original USAF CJ-3B are a front view and rear view (70K JPEGs) of George Bagwell's '64 in Virginia.