Many veterans who served with the U.S. military in Vietnam in the 1960s and early 1970's have posted their personal in-country photos on websites devoted to particular military bases or units involved in the war. Quite different from official or press photographs, this huge collection of pictures forms a unique history of the day-to-day life of a soldier in a combat zone.

Here are a few which capture some of the atmosphere of the war and the country, and which happen to include high-hood Jeeps. 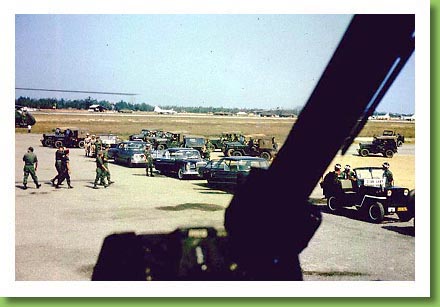 This first photo actually includes about a dozen high hood Jeeps, assembled on the tarmac at the Danang air base to escort a group of generals in their Mercedes and Chevy staff cars, and probably to transport officers of lesser rank.

The picture was taken by a member of Marine Medium Helicopter Squadron (HMM) 162 which was based at Danang for about five months in 1963 as part of Operation Shufly, designed to give greater tactical mobility to the Army of the Republic of Vietnam and to give the U.S. Marines first-hand knowledge of the situation in Vietnam. One of the major developments to come out of Shufly was the armed helicopter.

According to a History of HMM-162, "On 13 March 1963, 3 UH-34D's from HMM-162 delivered suppressive fire on the enemy during an ARVN troop lift. This was the first recorded instance of a Marine helicopter providing close air support in actual combat! On 27 April 1963, HMM-162 suffered the Marines' first loss of an aircraft in Vietnam that was not recovered, and directly attributed to enemy action."


The next photo was taken by Robert F. Fischer at the US Naval Support Activity Detachment at Binh Thuy, command center for US Navy Task Force 116 which patrolled the inland waterways of South Vietnam with helicopter gunships, Bronco propeller-driven attack aircraft, and PBR's (Patrol Boat River). 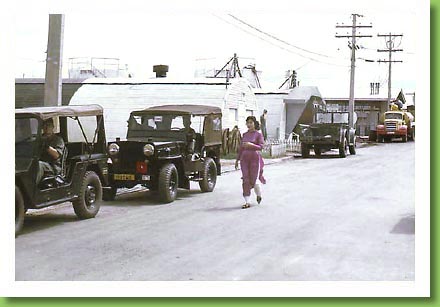 On this day in 1969, visiting brass were in Binh Thuy for a command change, and the drivers of an M151A2 and a CJ-3B were waiting for their passengers. The 3B looks like a Kaiser M606 military version, and carries what appears to be the star of a Marine Brigadier General.

In the larger copy of the photo (55K JPEG) the rear of a gray Navy Jeep, apparently a CJ-5, is also visible on the right. The photo comes from Robert's website Back in the Delta. 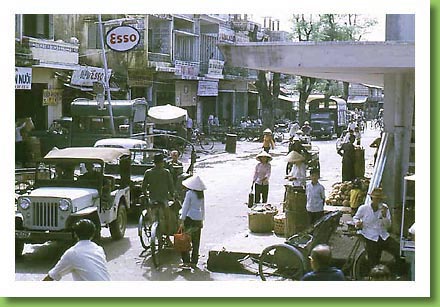 Robert Fischer also took this photo, from the back of an Army truck on a Road Trip From Dong Tam to My Tho on 4 July 1969. He says, "You could smell a Vietnamese market way before you encountered it. The merchants jammed the streets with their wares. Foodstuffs were piled on the sidewalks and ripened in the blazing heat of the sun. My Tho was a river city and fish a staple part of the community diet. Merchants would pile their catch of the day on top of yesterday's unsold fish."

Paused to let the convoy pass is a CJ-3B. Not too many details visible, but it looks like it's a Willys civilian 3B. 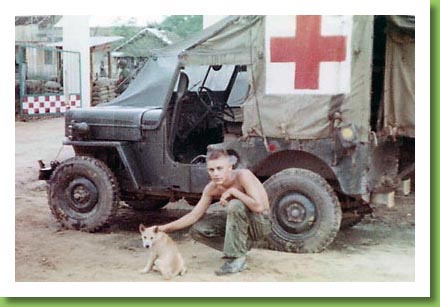 Many of the military high hoods seen in Vietnam were Japanese-built Mitsubishi CJ3B-J4 models used by the ARVN (Army of the Republic of Vietnam) who were allies of the American forces. Some, including this ambulance conversion, were also used by the U.S. Army.

Taken near Da Nang in 1967 by an unidentified veteran of Hotel Company, 2nd Battalion, 1st Marines, the picture was captioned: "Two good friends at the ARVN Compound. We usually rotate platoons here, the Song Cau Do Bridge, and the 106 tower near a CAP Unit. I think this is Jim Laverty." 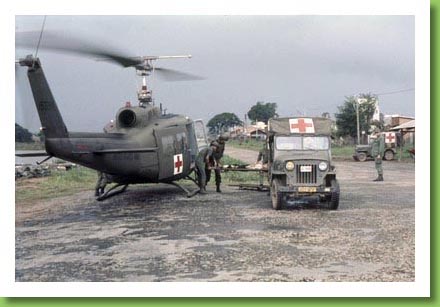 The CJ3B-J4 in action: An ARVN ambulance receives a wounded soldier of the 7th Division, ARVN, from an Iroquois helicopter near the Mekong River, III Corps Tactical Zone (III CTZ), after a medical evacuation by the U.S. chopper. A second ambulance waits in the background. 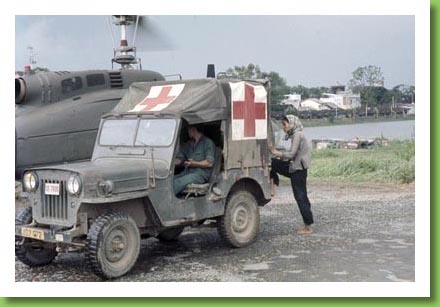 These two photos were taken by Ian (Max) Maxwell in Kien Giang Province, My Tho, and are from the collection of the Australian War Memorial.

The J4 ambulance conversion was apparently used by the U.S. Army as well as the ARVN. See CJ3B-J4 Military Jeeps for more details on this ambulance. 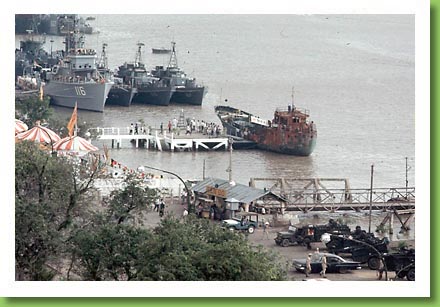 This very interesting Kirk Ransom photo includes quite a bit of activity down at the docks, where both the US and Vietnamese Navy were stationed. Mike Winchester comments that the decorations indicate "most likely the return of one of the ships stationed there from an extended duty somewhere else."

In the larger copy of the photo (70K JPEG) you can see vehicles including a Vietnamese police Jeep and a CJ3B-J4 ambulance apparently attending the arrival of the ship.

On the next dock a small crowd is examining a boat which is heavily damaged. In the background are a number of small naval patrol vessels. 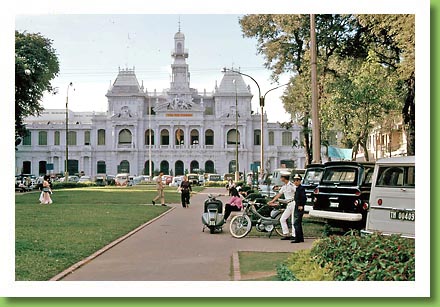 Kirk also took a picture of Saigon's Town Hall, a building which still serves that function in 2005, in what is now known as Ho Chi Minh City. A number of Jeeps can just barely be seen among the large group of cars parked near the entrance to the building, and the line of police vehicles to the right appears to include a couple of Jeep station wagons.

A less imposing building photographed by Kirk Ransom was a Caltex gas station (60K JPEG) and as usual there were a few Jeeps around, including a military Mitsubishi J4 painted white. 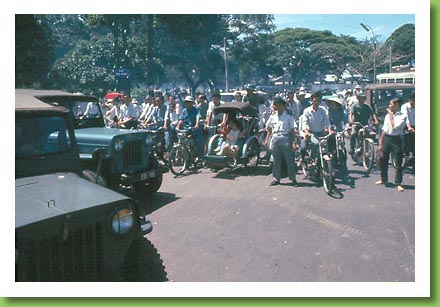 Kirk flew Phantom jets for the U.S. Air Force in Vietnam, and took a lot of photos around Saigon in 1965-66. They are now found on Kirk's website Ransom's Roots, which also includes a lot of Phantom photos. Several of his sightseeing pictures, such as this traffic jam, show Mitsubishi Jeeps around the South Vietnamese capital.

Another street scene (70K JPEG) photographed by Kirk Ransom shows a military and a civilian 3B in the background, as children play in the foreground. 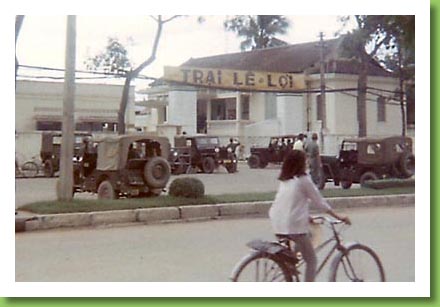 Although the Americans brought mainly the M38A1 and M151 MUTT to Vietnam, they apparently supplied large numbers of the Mitsubishi J4's to the ARVN. This photo taken by Dave Callahan in 1967/68 shows a half-dozen Jeeps outside the Trai Le Loi ARVN compound near Can Tho Army Airfield. For more photos around Can Tho, see Joe Moore's website The Delta Dragon.

The Jeeps seen here have wooden hood blocks, civilian-style parking lights, and single-pane rather than split windshields like the Mitsubishi J4, so these may be U.S.-built M606 exports. Although the tailgate-mounted spares are more typical of the J4, Luis Mariano Paz points out that M606s also were shipped from the U.S. to Argentina with rear M38-style spares. 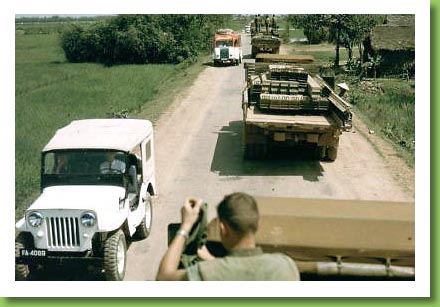 A more unusual sight was this spotless white civilian Jeep, seen on Rt. 1 between Hue and Da Nang in late 1966 or early 1967. Harry Dill took the photo while riding in convoy with the 3rd Bridge Company, a U.S. Marine Corps combat engineering unit specializing in building temporary replacements for destroyed bridges.

You could speculate that this was the vehicle of a Vietnamese government official. The rectangular mirror and lack of hood blocks suggests it's a Mitsubishi Jeep. 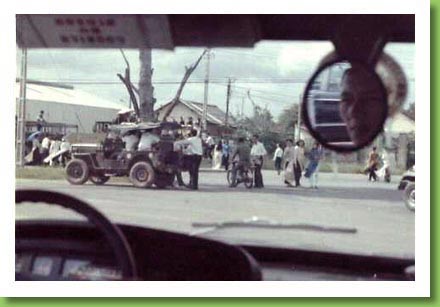 This picture taken by Steve Wiltsie from inside a vehicle in Saigon is one of many interesting photos on the American Forces Vietnam Network veterans' website.

The AFVN provided "Radio and Television Information and Entertainment to the American Fighting Man and Woman." People who weren't stationed in Vietnam may be most familiar with AFVN Radio as portrayed in the Robin Williams movie Good Morning Vietnam which features a CJ-3B in a starring role. In this case however, a Jeep is just glimpsed acting as a mini-bus.

Thanks to all the photographers, and to Luis Mariano Paz and Mike Winchester who located photos. -- Derek Redmond