I retired in 2015 from a career as a cinematographer and a lecturer in film, video and digital media production at the Department of Film and Media at Queen's University in Kingston, Canada. I had launched "The CJ3B Page" in November 1996 on an Apple computer in my office, and at the time it was one of only a handful of websites devoted to Willys Jeeps. Since then, it has grown from the initial five pages to nearly 1500 pages. When I retired, the web address and the name of the website were changed to "CJ3B.info." 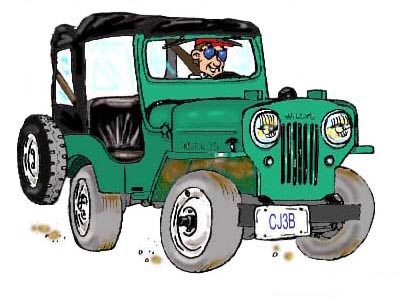 I had started the website because during the rebuilding of my 1959 CJ-3B I had found it very difficult to locate information about the model. I decided to focus specifically on the "high hood" CJ-3B, a civilian Jeep manufactured from 1952 to 1968 by a company which evolved during that time from "Willys-Overland Motors" to "Kaiser Jeep." It was an era that seemed to be neglected, and I wanted to help rescue the 3B from its position of being, in North America at least, the "unknown Jeep".

It has always been hard to resist the temptation to expand into covering other models and periods in the long and interesting story of Jeep vehicles, and sometimes I haven't been able to resist. But I felt from the beginning that it was better to try to cover one topic in depth, than to have a sprinkling of interesting items from that whole history. And I think that the strategy has worked, as the site has established an identity, attracted a lot of readers and generated lots of conversations and correspondence. Meanwhile, other websites have popped up to focus on different aspects of the Jeep story.

I guess the first big exception to that strategy was the Pictorial History of the Universal Jeep, with its pages of information on virtually every significant variation from the 1940s to the present, of the "Universal Jeep" (Willys-Overland's name for its 1/4-ton utility vehicle.) That just seemed like such an important reference item to have available on the web. Other similar Jeep history pages have since appeared on other websites, but in many cases most of the information was copied from here. 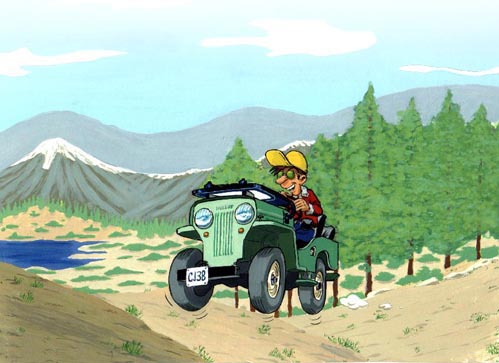 Another aspect of my strategy has been to have a balance between technical information for reference, and historical material that people can browse casually. It's important to make the reference material available and as accurate as possible, but hey, most of us are doing this because we enjoy it, right? For the same reason, I try to have a balance between photos and text. I like to find new pictures, but I try never to slap up an interesting picture without putting it in context with relevant background information.

I have been astounded how many CJ-3B owners I have met through this website, many of whom were in the same situation as me, wondering if maybe they had the only one of these high hood oddities in the world. And of course I have also discovered that the "high hood" design is truly the worldwide Jeep, exported in great numbers from Toledo, Ohio, and built in many other countries. That discovery produced another part of the site, Jeeps Around the World. I also added Fire Service Jeeps, and Toy Jeeps; see the Contents page to start browsing through the website.

I appreciate very much the contributions that many other people have made to the site; they have now reached the point that I have quite a backlog of material. But I always welcome submissions of photos and articles via e-mail; see the Contact page. And I am looking for someone interested in editing further material for the Tech Tips section.

See also Cover Pages from the website over the years, and some hidden links: Feedback from the early years, the 2010 April Fools story of The Mysterious White Jeep, and my 1969 home movies from Woodstock. 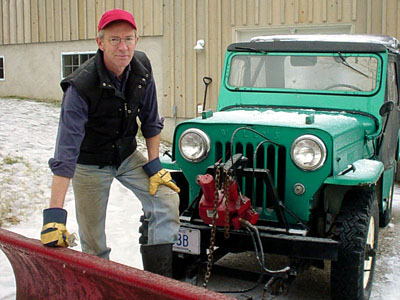 So far there have been no advertising banners on CJ3B.info, although ads would generate a few dollars, since the website serves hundreds of thousands of pages a month. However, since February 2014 the site has been hosted on a commercial server, which may at some point mean the need to find some revenue.

I guess the closest thing I have to an advertising banner at the moment, is the logo at the bottom of the cover page, for Britannica, which recommended The CJ3B Page as one of the best automotive sites on the web. (Not that their selection of recommended sites was all that scientific, but the Britannica name does carry a certain amount of weight.) If you actually want to see advertising, check out the CJ-3B Literature page and you'll find lots of old Willys ads.

Thanks to Roberto Flores for the drawings above. -- Derek Redmond

See also more photos of my Fountain Green '59, and my photos from The CJ3B Page Visits Spain.