Colonel Juan Perón was one of the instigators of a 1943 military coup in Argentina, designed to prevent the government from joining the Allies in World War II. He was elected president in 1946, benefiting from popular approval of his economic policies and his wife Eva. Economic problems and the death of "Evita" in 1952 led to an increasing reliance on force by his government, and his overthrow by another coup in 1955. Shortly before going into exile, he signed an agreement which led to the the manufacture of IKA Jeeps in Argentina.

After 18 years of political instability and violence, Perón returned from exile in 1973, only to be greeted by fighting at the airport which resulted in 400 deaths. He was elected president again in September 1973, with his third wife Isabel as vice president. 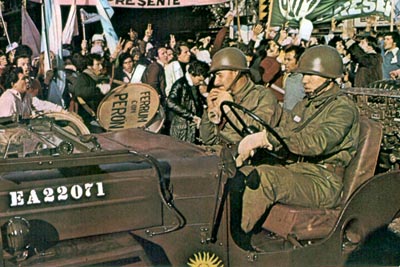 So it's not surprising that the Argentine Army (Ejercito Argentino) was on patrol during political demonstrations in 1973. The larger copy of this photo (200K JPEG) shows the crowd with a banner reading "Peron - Evita" despite the fact Evita had died more than 20 years earlier.

The M606 Jeep carries the army number EA22071 (although the number appears to have perhaps been inserted in the photo.) This number would identify it as belonging to the 7th Mechanized Infantry, known as the "Colonel Conde" Regiment, stationed near Buenos Aires. 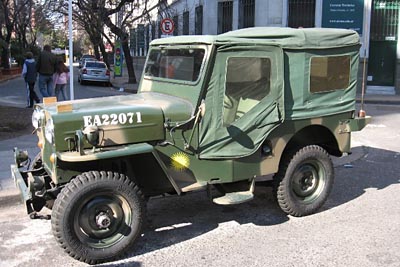 Luis Mariano Paz has sent photos of EA22071 as restored recently with paint based on Ejercito Argentino camouflage circa 1978. The Jeep carries Kaiser serial number 8105 139679 and was one of a number of M606s sold as surplus in 1993 (see Serial Number and Engine Number List on CJ3B.info.)

The Jeep carries a radio antenna on the left rear corner, and Luis notes that it still has the bolt holes for mounting the AN/VRC radio set seen in the photo above. 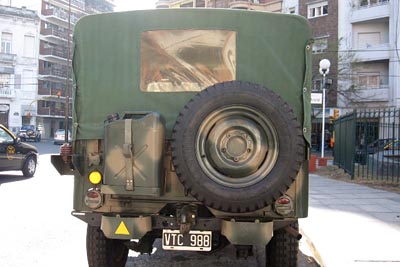 In addition to the radio antenna, the rear view shows a number of interesting details. The bumperettes, blackout taillights and trailer electrical connection are standard M606 modifications, but the rear-mounted spare and jerry can are more typical of the M38.

Larry Steed has noted on the CJ-3B Bulletin Board: "From my experience restoring military Jeeps for several years now, I'm aware that some of the military 3B's (M606 designation) shipped overseas had the spare tire and gas can mounted on the tailgates. The extended piece of the bumperette was mounted facing down on Korean era M38's and M38A1s to protect the rear sling loop (mounted just inside on the rear crossmember), so I imagine the same was true on the 606 Jeeps." 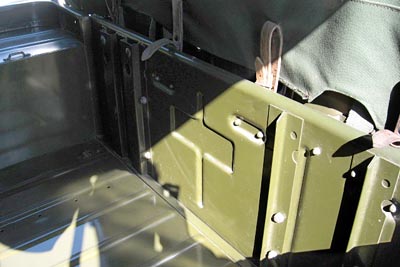 Larry continues: "The spare tire bracket and gas can holder was mounted to a special "hat channel" reinforced tailgate (same as used on the M38 & M38A1; without the reinforcing, the weight of the tire and a filled five-gallon can of liquid would eventually waller out the mounting holes and the tailgate could bend easily) to give them more protection from being ripped off or sideswiped had they been side mounted.

"If you don't have the spare tire bracket or heavy wall gas can holder and the necessary mounting hardware, two reliable sources that I use are Midwest Military in Minnesota, and Army Jeep Parts, Inc. in NJ." 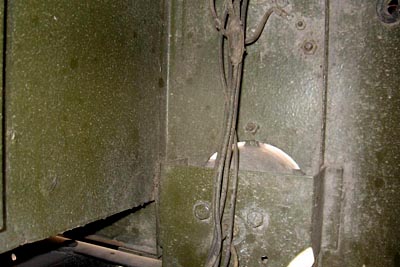 A photo taken inside the rear fender shows the bracket for the blackout taillight, and the wiring to the trailer connection. 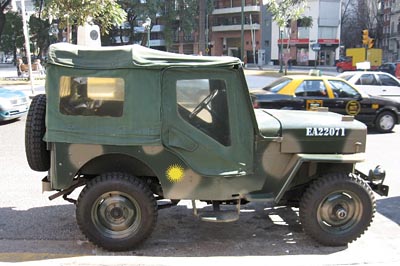 Seeing this Jeep parked on a Buenos Aires street in its 1978 camo, you realize that it probably came very close to being part of the deployment of the 7th Mechanized Infantry by air to the Falkland Islands (Islas Malvinas in Spanish) in 1982.

On 11 June 1982 it was the 7th who were dug in on Mount Longdon and attacked by the 3rd Battalion of the British Army's Parachute Regiment, in one of the last and bloodiest battles of the Falklands War (see Malvinas M606 on CJ3B.info.) The Argentine unit lost 31 men killed; the British 3 Para lost 23 men killed and was awarded 9 bravery medals including a posthumous Victoria Cross to Sgt. Ian Mackay. 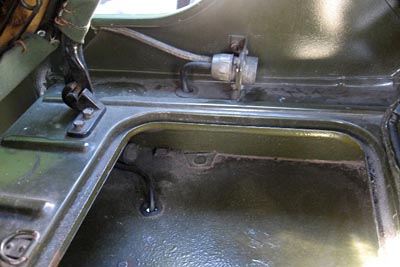 A photo of the toolbox below the folding passenger seat, shows the electrical connector for the military radio.See also more interior details: 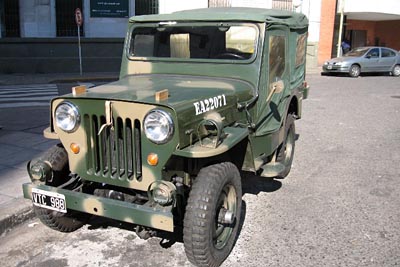 The extra blackout driving lights on the front bumper are a nice idea but non-original. The non-directional tires are 6.50x16 from Maggion in Brazil.

The restoration was done by a former army mechanic, and the Jeep now belongs to Ricardo Romano. 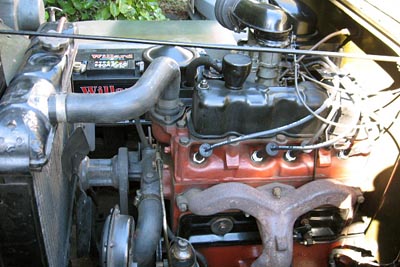 The photo of the F-head engine shows the original Carter YF carburetor and the AC dual fuel pump. See also a right side photo (90K JPEG).

Thanks to Ricardo Romano, and Luis Mariano Paz (who also has a 1966 M606 himself) for sending the photos. -- Derek Redmond

Also on CJ3B.info, see EA22071 starring as a Chilean Army Jeep in the movie Colonia.