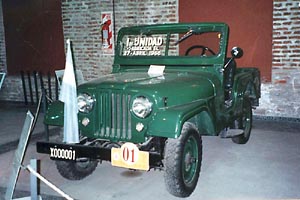 Industrias Kaiser Argentina (IKA) started building Jeeps in 1956, assembling the CJ-5 using components imported from the U.S., with the exception of locally-built engines. Remarkably, the first CJ-5 assembled in Argentina has been preserved and is on display at the Museum of Industry in Cordoba (right).

A new IKA plant was opened in Cordoba in 1958. Apparently the factory resulted from a 1955 meeting between Kaiser and Argentinian president Juan Peron. Although Kaiser-Willys had gotten out of the passenger car business in the U.S., the Cordoba plant built the Carabela (40K JPEG) based on the Kaiser Manhattan, until 1962, and then concentrated on the Bergantin (110K JPEG) based on an Alfa Romeo body, as well as Jeeps. Other automobiles built by IKA included the Torino (15K JPEG), Rambler, and cars for Renault. 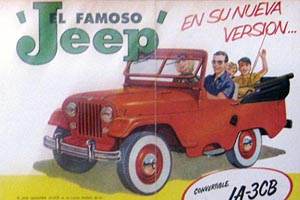 IKA soon created the JA-3CB, an all-local version of the CJ-5, built at the Cordoba plant in short and long wheelbase versions. Distinctive features included steps built into the sheet metal below the doors, and squared-off rear fenders (similar to the Jeeps built by Ford in Brazil). Early versions were built with two-pane opening windshields. 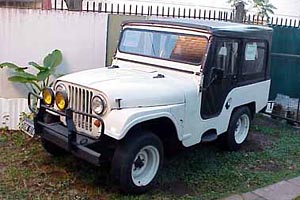 The IKA Jeeps were available with soft or hard top, or as pickups, and the majority were two-wheel drive. The principal engine was a 151 cu.in. four-cylinder version of the Continental straight six, built in Argentina, with a 3-speed gearbox similar to the T90. The rear axle was a Dana 44, and the front axle a Dana 25. 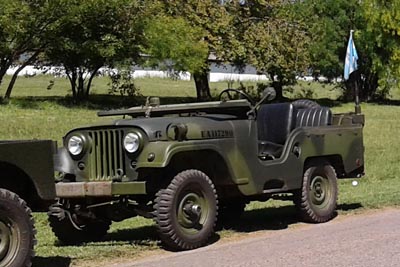 A militarized four-wheel drive version supplied to the Army was known as the M101. This 2017 photo of a restored M101 is from Luis Mariano Paz. 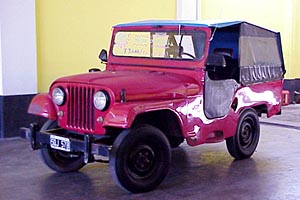 Florencio Gamallo reports that about 600 units of the CJ-6, in 2WD version, were factory-equipped with an Indenor 4-cylinder, 68HP diesel engine. Also, a very few units (about 6) built as prototypes for military use, were factory-equipped with the very rare 154 cu. in Tornado 4-cylinder OHC engine (a 4-cylinder version of the 230 Tornado straight six). They were sent to Chile, but after some testing, they were rejected by the Chilean army. Those units were later sold to the Bolivian army. 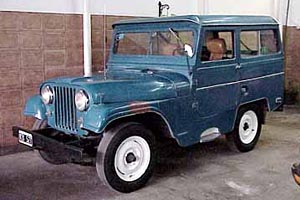 Stock doors were like the CJ-5. More rectangular doors, similar to CJ-7 doors and supplied with aftermarket hardtops installed by IKA dealers, were also common. 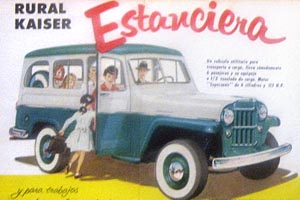 The Continental 226 and Tornado 230 sixes were used in a pickup truck called Baqueano (100K JPEG), the Utilitario (120K JPEG) delivery truck, and the popular Estanciera station wagon, which later received the new front-end styling by Brooks Stevens, also found on the Rural (90K JPEG) in Brazil. 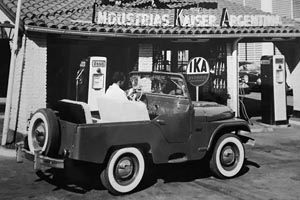 Florencio Gamallo estimates that between 1956 and 1978, about 100,000 Jeeps were built in Argentina. About half them were CJ-5, and half CJ-6. No more than about 20% were four-wheel drive. Thanks to Nicolas Carlos Castosa for this photo. 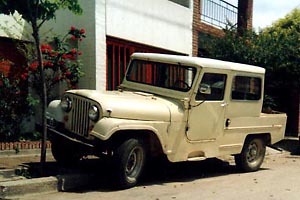 IKA Jeep production continued into the 1970's when American Motors sold the plant in Argentina to Renault. This 1974 long-wheelbase version is a two-wheel-drive IKA Jeep belonging to Matias Martino. See also a photo of Matias contemplating the conversion of the Jeep to 4-wheel drive (50K JPEG). 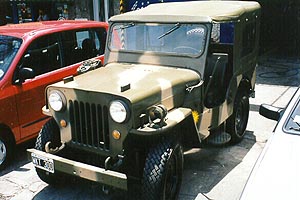 Most of the flatfender Jeeps in Argentina, including high-hood M606s, were imported by the military and later sold as surplus. See also a rear view photo (50K JPEG) of this M606, and a photo of the information plates on the dash (50K JPEG).

A significant number of flatfenders (mostly CJ-3As) were also imported by the Argentinean Mail, the state-owned gas company and fire departments, and later sold through auctions.

As of 2000, Daimler-Chrysler was building Cherokees and Grand Cherokees in Argentina.

And see other Jeeps Around the World.