Movie recalls a bad chapter in Jeep history in Chile 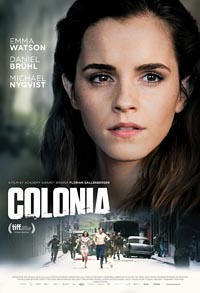 Colonia is a 2015 co-production from Germany, Luxembourg, and France. The English translation of the title "The Colony" is seldom used because of several other films with that title.

The film stars Emma Watson as British stewardess Lena searching for her German boyfriend Daniel (Daniel Brühl), a photographer imprisoned in a gruesome prison camp in Chile. That fictional plot is set against the factual backdrop of the 1973 CIA-sponsored Chilean military coup, and of "Colonia Dignidad," a notorious cult settlement in central Chile led by ex-Nazi Paul Schäfer (played by Michael Nyqvist.) From 1973 to 1990 the colony was used as a torture facility by the Pinochet military regime, and hundreds of detainees were killed and buried on the grounds.

The incredible story of Colonia Dignidad ("Colony of Dignity") is in fact still ongoing, although the real Schäfer was finally convicted of child sexual abuse in 2004, and died a few years later in prison. (The Telegraph.)

The Pinochet regime is still a very sensitive subject in Chile, so early scenes in Colonia showing protesters in Santiago being arrested by soldiers and detained in a football stadium, were shot in Argentina. (See "Buenos Aires doubles as Chile" at Filming in Argentina.) 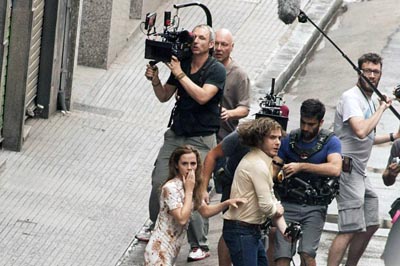 Buenos Aires was able to provide Colonia with locations that would appear authentic, as well as 1970's airplanes, period vehicles, and the necessary production equipment and technicians.

Here camera crews shoot with cameras hanging from an EasyRig and on a Steadicam, as Lena and Daniel run from the soldiers. 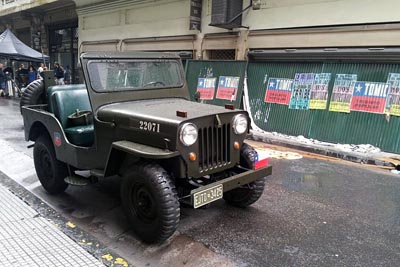 Ricardo Romano's M606 is seen here with a Chilean flag and license plate added to the front. Reproductions of 1973 political posters have been added to the walls of the Barrio de San Telmo neighborhood. The camera crew in the background is protected from the light rain falling, but they wanted the Jeeps with canvas tops off.

The number of Kaiser M606 Jeeps (militarized CJ-3Bs) supplied to Chile by the United States in the 1960s under the Mutual Defense Assistance Program is unknown, but undoubtedly many of them were still in use during the coup in 1973. 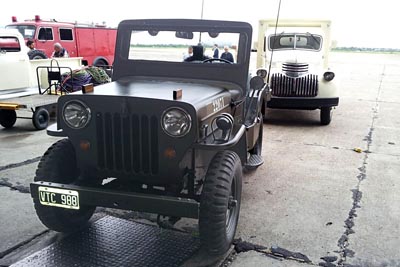 The AACVM photos show how much work goes into shots that may last only a few seconds. First stop for the Jeeps was "makeup" where the "EA" in front of their hood number, indicating Ejercito Argentino ("Army of Argentina") was covered with tape.

See also the history and restoration of Ricardo's M606 in Ejercito Argentino 22071 on CJ3B.info. 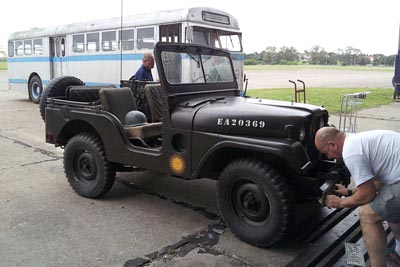 License plates are replaced, and Chilean flags bolted on the front bumper. The Sol de Mayo ("Sun of May") national emblem of Argentina, will be covered by a Chilean shield. This is Pedro Obregon's M38A1 being prepared for the later airport scene, along with a period Leyland bus in the background.

The M606 adds to the shocking realism of the scene where Brühl's character is beaten and arrested for taking photographs of the illegal use of force. 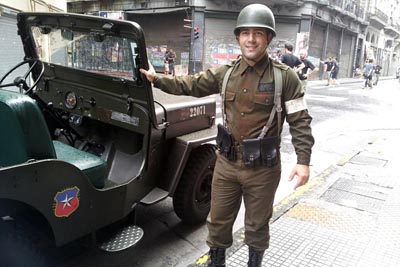 Extras dressed as Ejercito de Chile soldiers enjoyed posing with the Jeeps. If you look at the large copy of this photo, you'll see the Chilean shield on Ricardo's M606 was not quite big enough to cover the Sun underneath. 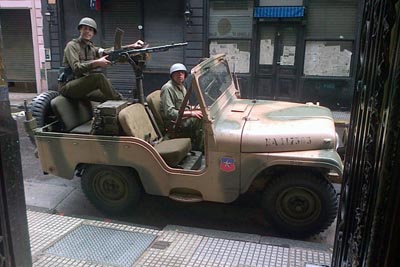 As far as I know, the M101 was never used by Chile. But the film's director Florian Gallenberger must have liked the camo paint job and the Madsen light machine gun in the back, because he featured Raul's Jeep in several shots. 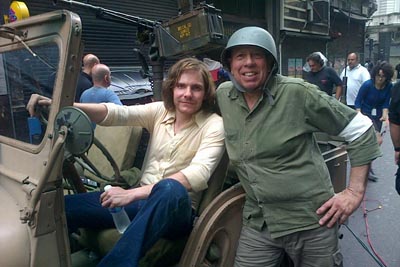 Raul posed with one of the stars in the driver's seat. Luis Mariano Paz commented: "Emma Watson was always surrounded by an almost impenetrable entourage. On the contrary, Daniel Brühl had no problem taking a photo with whoever wanted his autograph."

Brühl would have his chance to drive a Jeep a few days later when the final airport scene was shot (see below.)

Raul drives dramatically through the foreground of one shot. The "EA" of his hood number isn't covered, probably because there was no tape to match his camo paint. 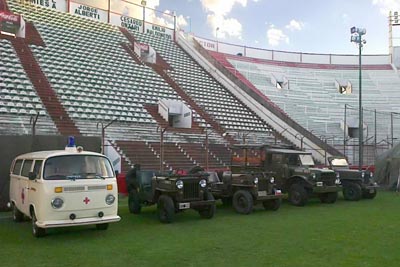 Prop vehicles including three M606 Jeeps arrive at the Club Atlético Huracán stadium in Buenos Aires on 18 December 2014. These vehicles are much more authentic than the motley collection of Jeeps that was assembled for the 2007 shooting of The Black Pimpernel in Chile, where understandably there isn't the same interest in preserving military history. 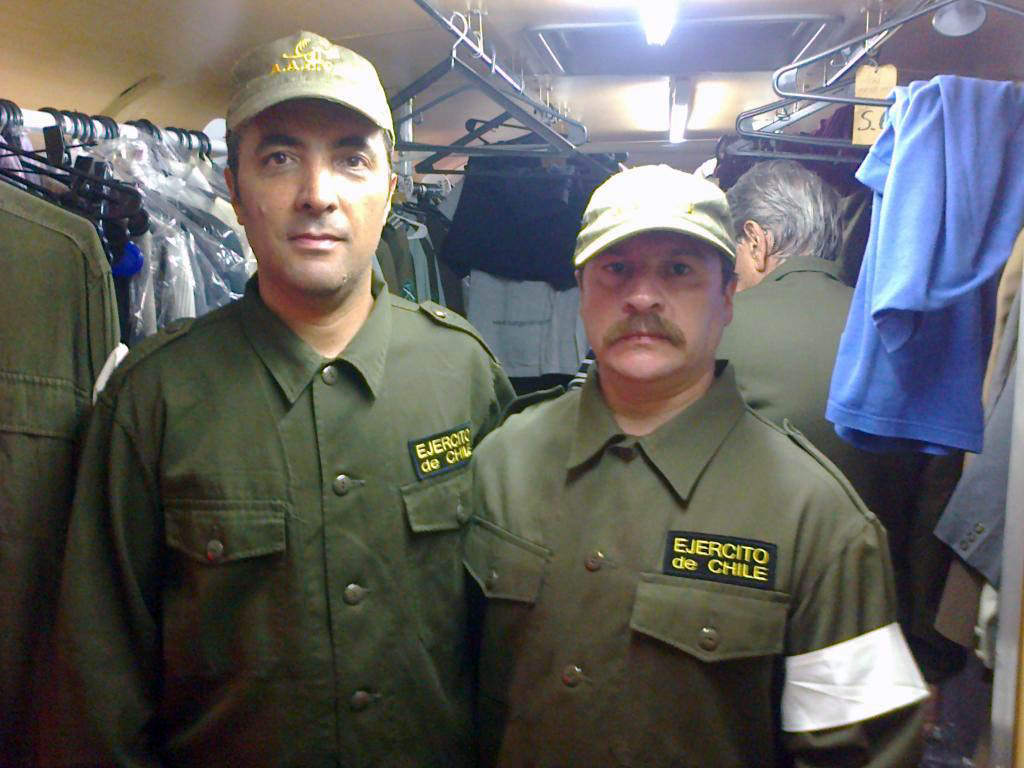 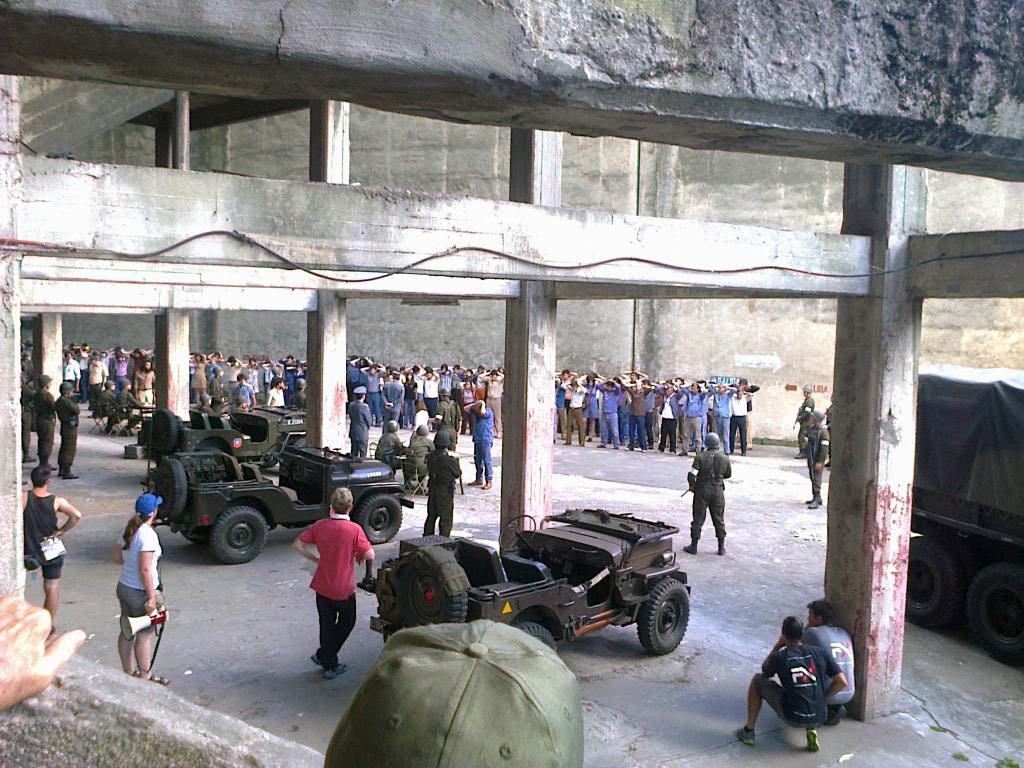 During the day at the stadium, the production shoots a scene in which suspected supporters of Allende arrive in military trucks and are lined up. 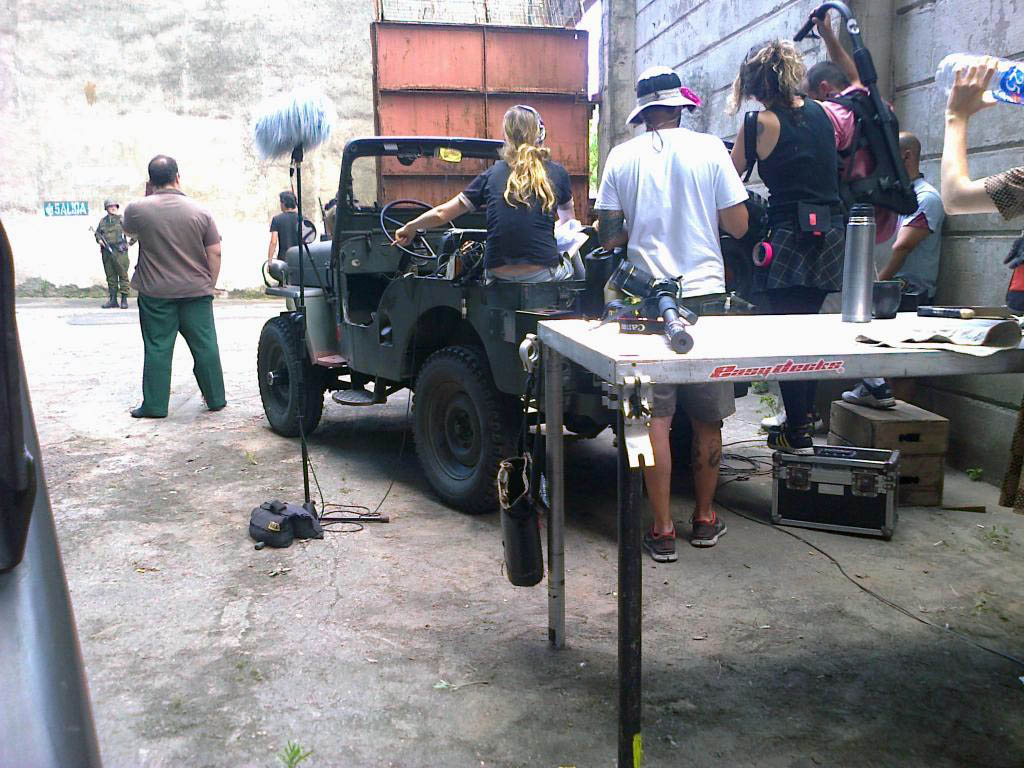 Luis grumbles a bit when the sound department camps in his Jeep! Meanwhile, the camera department sets up the EasyRig for the sequence where Daniel protests that he is a foreign citizen, and is manhandled by the soldiers again.

The night scene of the arrival of a helicopter bringing a disguised informant to identify Allende sympathizers in the lineup, is quite scary and powerful.

Daniel is thrown in the VW ambulance to be taken to the torture facility. 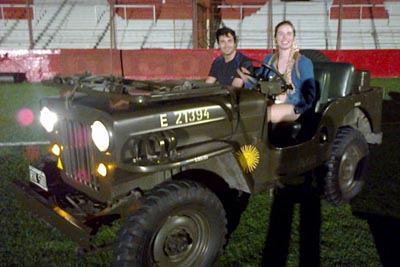 Luis describes the shoot: "The night scene in the field began with the parking of the Jeeps at about 6 PM. The scene of the landing of the helicopter was repeated more than 30 times and with the participation of 200 extra actors, beginning at 10 at night and ending at 4 in the morning the next day."

The prop woman in charge of putting the Chilean emblems on the Jeeps wanted to try driving Hugo Bianucci's M606. 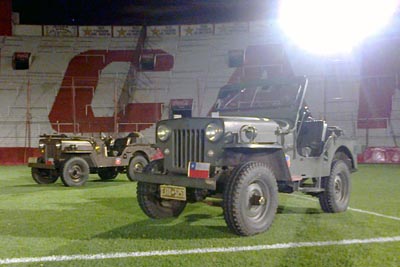 Luis took a shot of his M606 under the huge spotlights. His 1966 Jeep was the first M606 in Argentina featured on CJ3B.info. 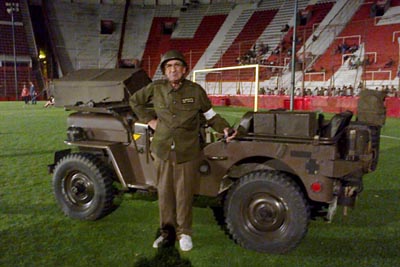 Miguel Paradiso didn't need boots because he would only be sitting in his Jeep. Miguel's radio-equipped 1967 M606 was on the cover of CJ3B.info in 2001.

The long central section of Colonia, set inside Paul Schäfer's prison camp of Colonia Dignidad, was shot in Luxembourg and Germany. Lena follows Daniel and joins Schäfer's cult, and I wouldn't encourage anybody to sit through the film unless they are prepared for a series of violent and haunting scenes.

But after Lena and Daniel escape from the colony, with his photos documenting the underground torture facility there, a dramatic chase begins at the airport.

A CJ-2A pulling a train of baggage carts is one hero of the final scene, as Lena and Daniel jump into it and race out to a Lufthansa Boeing 707 on the tarmac, about to take off.

Brühl and Watson's characters have been betrayed by the German embassy, and Paul Schäfer as well as the police are right behind them. 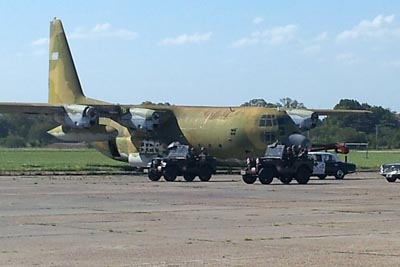 The suspenseful scene was shot at El Palomar Air Force Base in Buenos Aires, with Argentinian military aircraft like this aging C-130, sitting just off camera. 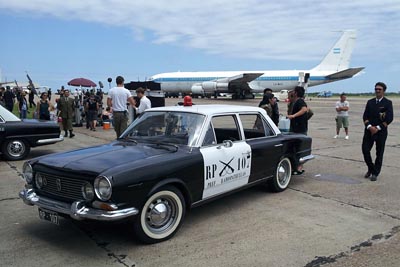 The Torino was an Argentinian-designed car originally based on elements of the 1964-65 Rambler American and Classic, and built by IKA from 1966 to 1981.

The crossed carbines on the radiopatrullas cars have long been the emblem of the national police force Carabineros de Chile, who took part in the 1973 coup and who did in fact buy Torinos from Argentina.

Lena and Daniel just manage to get onto the plane, and Schäfer and the military are shut out. We get a look at the M38-style tailgate spare found on many of the Argentinian M606 Jeeps.

The jet engines roar to life above the Jeeps, and it's the M38A1 that gets this low angle closeup.

Schäfer, played with convincing evil by Michael Nyqvist, is left standing on the tarmac as the 707 begins to taxi away, and Ricardo gets his big moment when he leaps out of the driver's seat of his Jeep.

The availability of the 707, whose flights open and close the movie, was a major factor in bringing the production to Argentina. (See Behind the scenes of Gallenberger's Colonia.)

The mountains in the background, which complete the illusion of being in Santiago, Chile, were added in post-production.


The Lufthansa captain heads for the runway despite his departure clearance being cancelled. It's the end of a great scene for old Jeeps, and the end of the movie, as the jet climbs into the sky.