Lone flatfender of the 1982 Falklands War 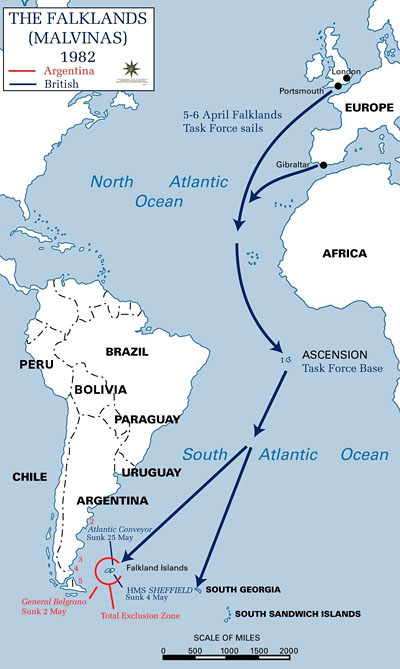 The Falkland Islands in the South Atlantic (known by Argentina as Islas Malvinas) are administered by the United Kingdom, and are one of many little remnants of great colonial empires (such as the French island of New Caledonia in the South Pacific, or the Dutch island of Saba in the Caribbean.)

But the Falklands are different because Argentina has long claimed ownership, and on 2 April 1982 precipitated a hard-fought war with the UK by landing an occupying force on the islands to establish Argentine sovereignty.

Britain responded three days later with a naval task force that eventually included 127 ships. An air war ensued, and large naval vessels were lost on both sides, including the Argentine cruiser General Belgrano with the loss of 321 lives.

Map by the Department of History, United States Military Academy. 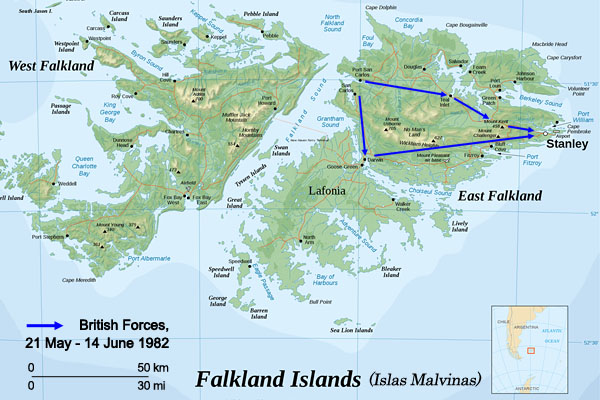 A successful British counter-invasion was considered by the U.S. Navy to be a military impossibility, particularly because Argentina had air superiority. But 4,000 British troops made an amphibious landing on East Falkland on 21 May, and were reinforced by another 5,000 on 1 June. They fought their way across the island by foot and helicopter, and took Stanley, the capital, on 14 June. British forces lost 255 killed, and total Argentine losses were 633. (Wikipedia)

Base map by Eric Gaba under GNU. 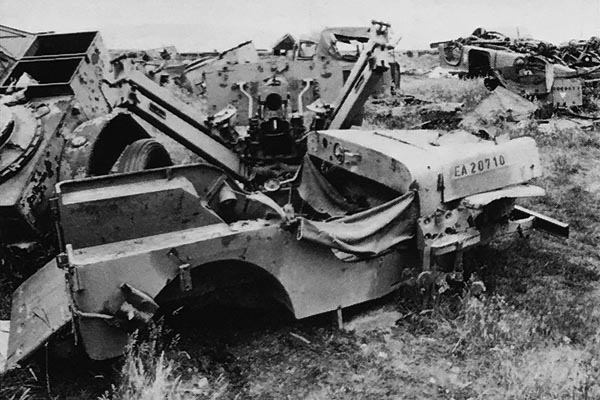 Apparently the only M606 on the islands during the hostilities belonged to the Batallon Logistico 10 (Logistics Battalion 10) of the Ejercito Argentino (Argentine Army), hood number EA20710. 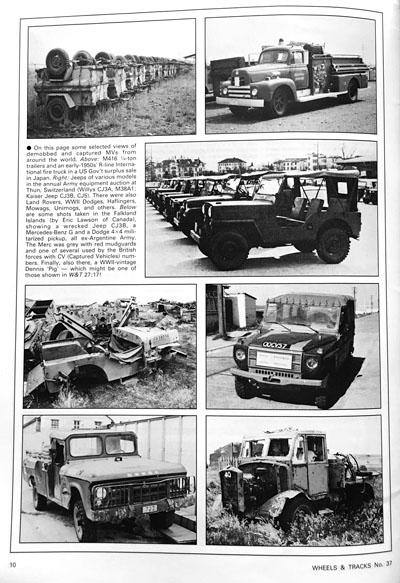 The photo above appears to indicate that EA20710 was knocked out during combat, and later stripped of parts such as steering and wheels.

It was published on page 10 of Wheels & Tracks issue no.37 in 1991, and credited to Canadian photographer and historian Eric Lawson. Coincidentally on the same page, just above EA20710, was a photo of a well-preserved CJ-3B at the annual Swiss Army equipment auction.

Other Argentine vehicles photographed by Lawson in the Falklands were a Mercedes Benz G-Wagen and a Dodge pickup. 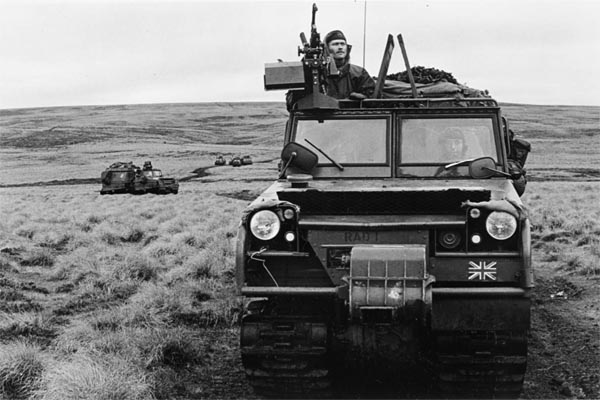 British forces did not land many vehicles, and moved mainly on foot and by ship or helicopter. The small tactical utility vehicle used by Royal Marines units was the Volvo BV202E, an articulated tractor-trailer. The tracked vehicle was steered by hydraulic rams which changed the angle between the tractor and trailer. 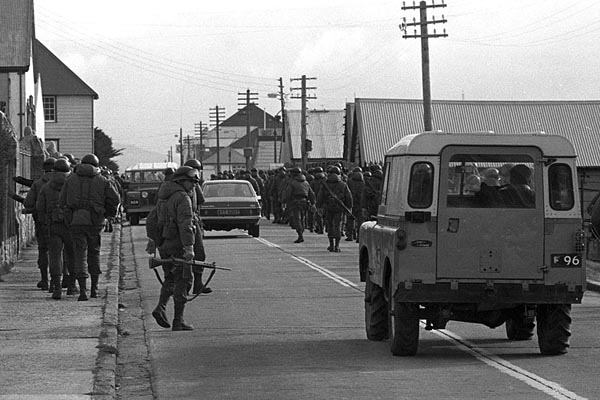 It is a matter of some debate whether any British Army Land Rovers were used in the campaign. Most Land Rovers seen in photos such as this picture of Argentinian troops in Stanley, clearly belonged to civilian residents, the majority of whom were British.


Thanks to Luis Mariano Paz for tracking down the details on EA20710. -- Derek Redmond

Last updated 1 May 2019 by Derek Redmond redmond@cj3b.info
https://cj3b.info/Military/MalvinasM606.html
All content not credited and previously copyright, is copyright Derek Redmond