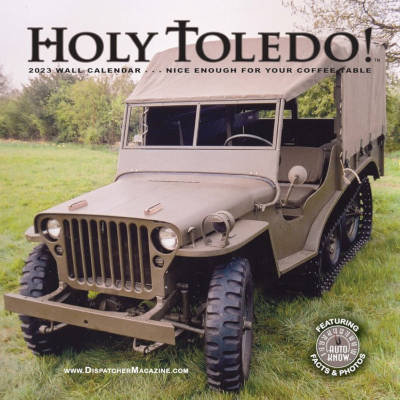 Well, last year's Holy Toledo! calendar did not include any CJ-3Bs, so perhaps that's why I didn't review the 2022 edition (300K JPEG). Actually, I'm sure you know I wouldn't skip a year because of that; several earlier editions I reviewed here were also missing a high-hood Jeep (see links to all the reviews below.)

In fact, I love the Holden USMC ambulance which was on the cover last year. (That Holden restored by Joe Hires is also featured here on CJ3B.info, on the Willys Military Ambulances page.) No, I just didn't get my hands on a copy of last year's calendar because it sold out!

This year Holy Toledo! has another unusual WWII jeep on the cover, the T-28 halftrack. But it has also made up for last year's omission by featuring two CJ-3B Universal Jeeps! 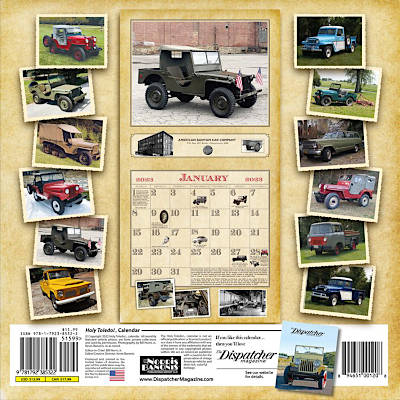 Lindsay Clark's beautiful red '53 3B (upper left on the back cover seen here) illustrates March in the calendar, followed immediately in April by a matched green pair from the collection of the late John Ittel -- a '53 CJ-3B (which doesn't appear on the back cover) and a '63 CJ-5. That 3B with its posthole digger has in fact appeared in the calendar before, back in June 2007. John's CJ-5 carries an Auburn trencher, which has been featured in action on CJ3B.info.

There's a good selection of other Willys models, and only one foray into the AMC era this year -- a to-die-for, all-original 1971 Wagoneer in Avocado green. And it's a good year for WWII jeep fans; in addition to the T-28 there is a unique Bantam BRC-40, and the very first Ford GP.


Speaking of Ford, for October there's a yellow 1973 F-75 from Ford of Brazil, their version of the Willys pickup, produced after Ford bought Willys do Brasil (see Jeeps in Brasil on CJ3B.info.) If I'm not mistaken, this is the first time the calendar has featured an overseas Jeep model, and I for one would love to see Norris-Banonis do some world travelling and collect photos for a calendar made up entirely of unique international Jeeps (see Jeeps Around the World on CJ3B.info.) -- Derek Redmond


Holy Toledo! can be ordered online at dispatchermagazine.com, and the price is $15.99 plus shipping.