As mentioned on previous ONUC pages, some countries brought their own transport with them to the Congo, but most that did had Land Rovers rather than Jeeps. The only contingent to bring in a large number of their own Jeeps was India, who provided more manpower to ONUC than any other country.

India provided various headquarters personnel and other specialists to ONUC as early as mid 1960, but these were mainly integrated into multi-national units. The main Indian component, the 4,800-man Indian Independent Brigade Group, began arriving in March 1961 and brought its own Jeeps as well as some other vehicles. 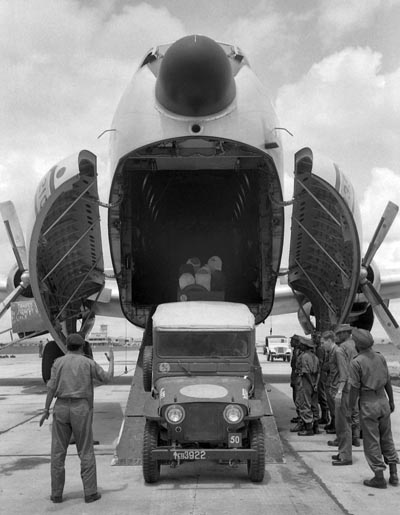 The Indians used Jeeps of different models, taken straight from army units back home, and these arrived in full Indian markings. This CJ-3A with a trailer is being off-loaded from a USAF C-124 transport in Leopoldville in late March 1961, with an ONUC CJ-5 visible in the background, but most of Indian vehicles arrived by ship to East Africa and were then transported by rail and barge into eastern Congo. The yellow roundel on the hood was an Indian air recognition sign which was usually painted over with a blue and white UN insignia (50K JPEG) in the Congo. (Photo © Terence Spencer) 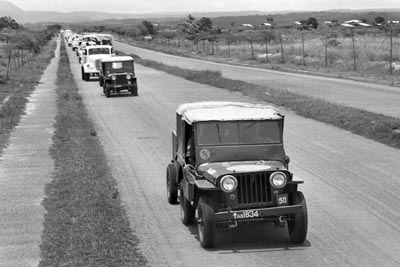 An Indian CJ-2A and a CJ-3A leading a column of ONUC trucks with Indian troops from the airport, immediately after arrival in March 1961. The CJ-2A has its spare wheel on the left-hand side, indicating that it is a 1948 model (1) -- like many of the Indian CJ-2As. The leading Jeep obviously has some serious front end alignment problems, judging from its twisted appearance, and is towing a trailer that is presumably of Indian manufacture. (Photo © Terence Spencer) 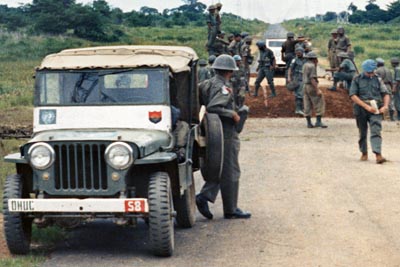 The CJ-2As and -3As used by the Indians did not seem to have any particular military modifications. In ONUC service, the Indian Jeeps were usually not finished overall white as was done with UN-owned vehicles, and instead typically just had the lower windshield frame and part of the rear body painted white, plus often also the bumper. They often carried quite elaborate unit markings and retained their Indian military serial numbers. The driver of this CJ-2A is watching repairs of the road to Jadotville (see the Congo map), which was blocked by Katangese troops during the final round of fighting in late 1962 and early 1963. (Photo © Ingemar Eriksson) 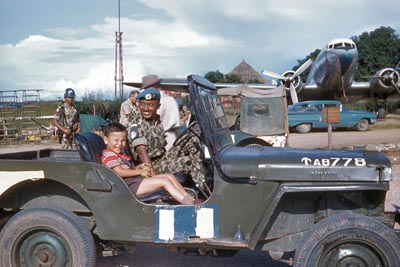 At first glance, this Jeep looks like a CJ-3A but a closer scrutiny reveals that it is actually a CJ-2A body; the top bow storage brackets on the passenger side also show that it is a 1948 model. But at some point it has been fitted with the windshield from a CJ-3B: note the rounded shape but lack of a vent. Although this is definitely an Indian-supplied Jeep, the soldiers in the photo are Indonesians who presumably borrowed or took over some vehicles from the Indians. Unusually, it has a blue and white UN flash (crudely) painted also on the right-hand side. The DC-3 in the background belonged to a Rhodesian company which used it to fly supplies to the Katangese during the UN embargo. (Photo © Efrain Morantes)

A fair proportion of the Jeeps the Indians brought to the Congo were CJ-3Bs, and the -2As, -3As and -3Bs were apparently used mixed in the same units, with little regard for standardization. The CJ-3Bs were presumably all Mahindra-built examples while the earlier versions may have been imports. 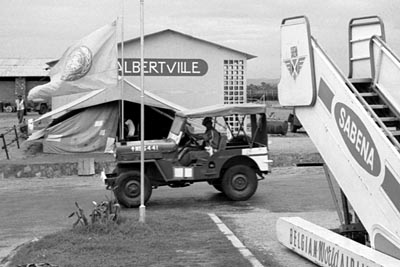 This CJ-3B seen at the ONUC air base at Albertville (now Kalemie) airport in November 1961 has a bracket for a pickaxe head on the front fender, as seen in Military Jeeps in India, as well as the straps for the handle in front of the windshield. The top is also typical of the Indian-built examples. (Photo © Terence Spencer) 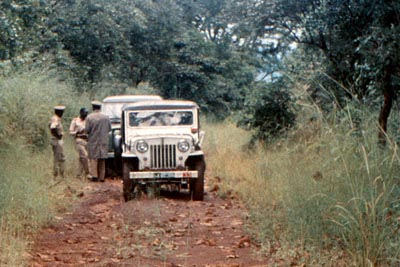 A CJ-3B on patrol in the bush at some unknown date, in the company of a Land Rover. The pickaxe head bracket on the left fender shows that it is an Indian vehicle and this is supported by the Indian-style unit markings. Even so, the Jeep is painted all-over white and has a ONUC registration number. Perhaps it had officially been traded to the UN by the Indians for some other vehicle, but was still used by the Indian brigade; things were seldom straightforward in the Congo! (Photo © Stig von Bayer) 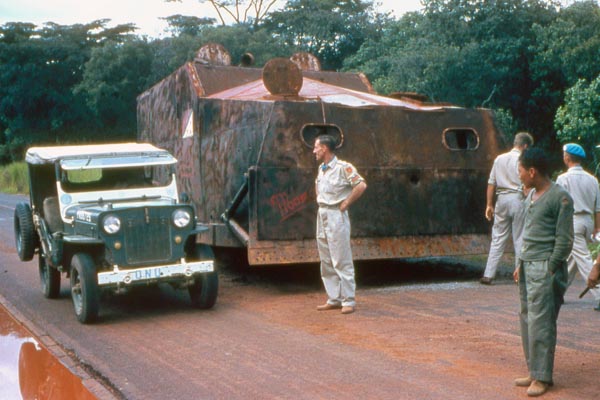 Another Indian CJ-3B, this one outside Elisabethville in late 1961, after Operation "UNOKAT". It has a chaff screen and the pickaxe handle is in place in front of the windshield, together with the regulation spade next to the spare wheel. The driver has stopped to talk with ONUC soldiers of several nationalities, come to examine the hulk of a Katangese home-built tank knocked out by Indian troops in the latest round of fighting: note the hole in the front. Named Mamouth ("Mammoth"), the "tank" was built around a Caterpillar bulldozer. (Photo © Lars Danielsson)

The round that knocked out the "Mamouth" above, in all probability came from one of the Jeep-mounted 106 mm recoilless rifles used by the Indian brigade. This was an Indian adaption, using a US-built M40 rifle fitted to a Mahindra-built CJ-3B with suitable modifications. These included a split windshield, a relocated spare wheel and various internal fittings to accommodate the weapon and ammunition, etc. 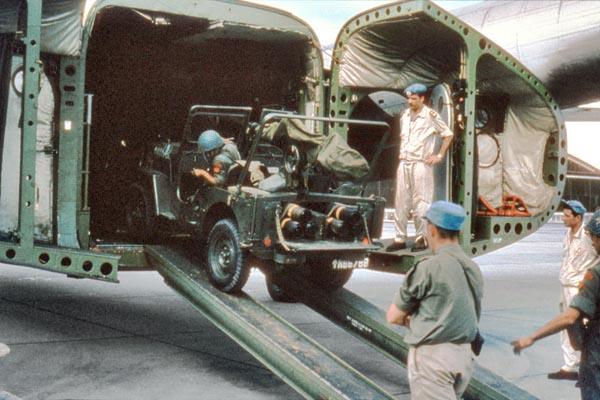 One of the first Jeeps fitted with a gun is being unloaded from a UN C-119 transport at Kamina air base (see the Congo map) in 1961. It retains its tailgate which was apparently normally left in the open position to provide ready access to the 106 mm rounds stowed in the rear. The support bracket across the rear, clamped at the corners, is clearly visible, as are the Indian-style top bows. (Photo © K-A Wallmark) 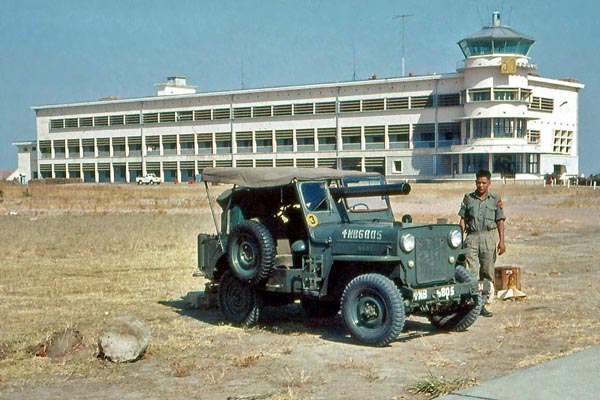 An Indian gun Jeep seen at the Kamina air base in 1961, no doubt soon after arrival judging from its lack of white paint. Kamina was a huge former Belgian base complex in the Katanga province and was home to many ONUC ground and air units. (Photo © Tommy Nilsson)

A second view from the same location shows a line-up of gun Jeeps with their tops down (170K JPEG), after some UN markings had been added. (Photo © Hans Nordberg)

This 1961 photograph by Howard Sochurek of LIFE magazine shows the rear end of two of the CJ-3Bs with 106 mm recoilless rifle during an exercise in the Congo. They have the white-painted portions customary on the Indian ONUC Jeeps. The bumperettes were apparently standard on the Indian military CJ-3Bs but these two examples have had their tailgates removed, although the chains are still in place. Note that the Jeep on the right, NB6805, is also shown in the color photo above. (Thanks to Federico Cavedo for finding this picture in the LIFE magazine photo archive.) 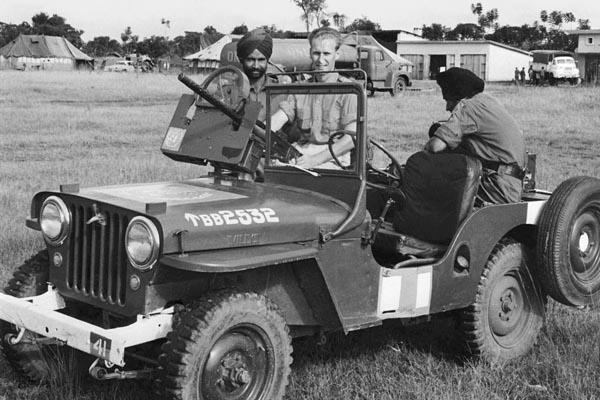 The Indian brigade in Elisabethville constructed this machine gun Jeep out of one of their CJ-2As in late 1961, using a gun mounting salvaged from a Minerva TT (see Part 18). A single .30-caliber Browning is fitted here but usually there were two guns mounted. The vehicle was in many ways a predecessor of the many M606s later converted in a similar way by the Congolese Army (see Part 12). (Photo via Pontus Ekström) 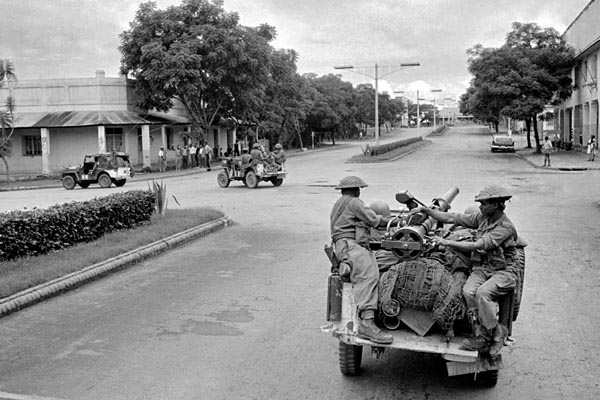 The final push. A column of Indian CJ-3Bs race into the town of Jadotville during Operation "Grand Slam" in early January 1963. At the front is a radio vehicle, the second one seems to carry some kind of small mortar, and the third has a recoilless rifle.

The Katangese secession ended not long afterwards and within three months the Indian brigade had left the Congo, withdrawing most of its vehicles back to India. (Photo © Topham Picturepoint) 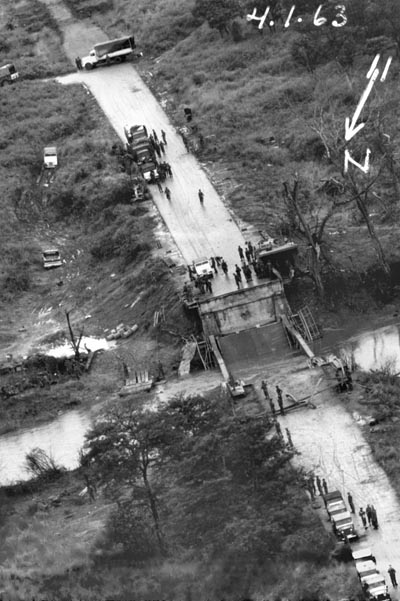 The Jeeps seen above had had to be manhandled on a raft across the Lufira River since the bridge had been blown up by mercenaries.

A United Nations aerial reconnaissance photo from Lufira, taken on 4 January 1963, shows an ONUC column lined up at the destroyed road bridge. Most of the vehicles are Indian CJ-3Bs, with a few CJ-5s and CJ-6s and larger trucks thrown into the mix. On the left is the temporary ferry used to bring the column across. (Photo UN 22 Sqn) 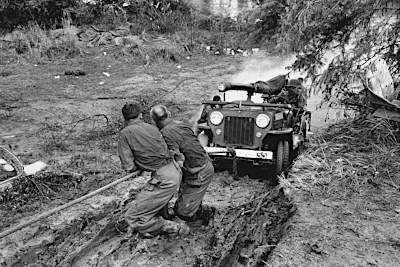 This UN photo taken on 3 January shows one of the gun Jeeps being hauled up the slope after crossing on the ferry. (Photo © UN Multimedia no. 184413)

The ONUC operation ended in mid 1964 and there was peace of sorts in the country for a long time. Even so, the economic and political situation remained bleak, and indeed in many respects deteriorated further.

In 1996 a new war broke out in eastern Congo, involving several countries, followed by a second war two years later. In 1999, the UN established a peace-keeping force called MONUC (renamed MONUSCO in 2010), which remains in the Congo at the time of writing. India has remained a major contributor to this force and they once again brought their own Jeeps to the Congo. 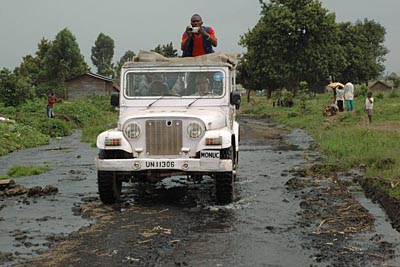 India has made extensive use of more modern types of Mahindra Jeeps for their MONUC units. Neither the vehicle nor the background in this photo from 2007 show much change from the 1960s, and the roads are certainly no better. (Photo by Julien Harneis under Creative Commons) 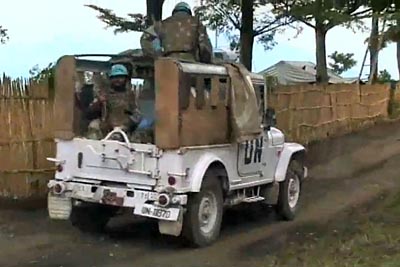 This frame from a film taken in the North Kivu province in 2008 shows another Mahindra Jeep, very similar to the one above. In 2015, more than 50 years after the end of ONUC, Jeeps were still in use with the United Nations in the Congo.

Continue to Part 9: ONUC Air Division or return to the Table of Contents.

1. Differences between the CJ-2A and the CJ-3A at "The CJ-3A Information Page."

The flag at the top of this page is the flag of the Indian Army.