There seems to be an increasing interest in India in the restoration of older Mahindra flatfender Jeeps, particularly ones built for the military. Some of them are not actually all that old, dating from the 1980's, but by the time they're sold as surplus they are definitely in need of restoration. 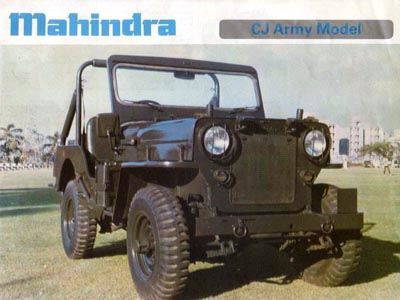 This brochure from Mahindra & Mahindra promotes their "CJ Army Model" based on the CJ-3B. The name is ironic, since Willys originally chose the "CJ" acronym to represent "Civilian Jeep." The brochure is undated, but probably dates from the 1970's or 80's. As far as I know, the model was not sold widely outside India, although Mahindra Jeeps were used by the military in other countries (see Yugoslav Army Jeep on CJ3B.info.) And apparently a company in Switzerland tried to market these under the name "Sabavia Commando" (see Real Life Mahindra Marketing Tales.) 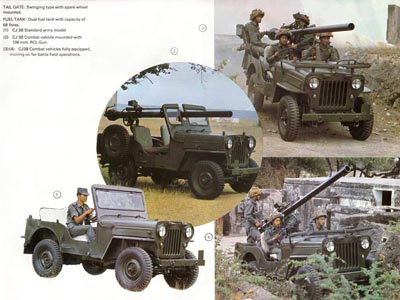 The "Army CJ" was available in right and left-hand-drive, and in a 106mm recoilless rifle version. According to the brochure, it had dual gas tanks with a capacity of 68 liters. Aside from the split windshield for the gun, distinctive features included chaff screen, blackout lights, headlight protection, lifting rings on the bumper, and handles on the side of the body. 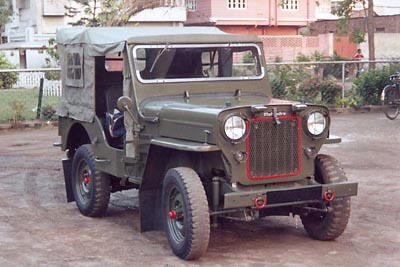 Anirban Sinha owns this nicely restored right-hand-drive CJ-3B, originally built for the Indian army by Mahindra & Mahindra in 1981. He says, "I purchased it from a scrap iron dealer based in Panagarh, West Bengal (based on information provided by my friend Rajdeep) from where it was towed to Mr. Uday Bhan Singh's workshop in Liluah and restored (for which I remain ever indebted to Mr. Singh)." 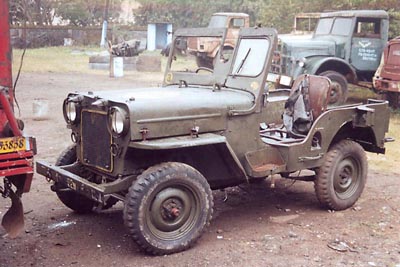 As found, the Jeep had been equipped to carry a 106mm recoilless gun, with a split windshield. A rear view (80K JPEG) shows the dashboard-mounted support for the barrel of the gun, and the shell mounting brackets and blackout taillights in the rear.

Other features included an extra set of coil springs at the rear, jerrycan holders, shovel and pickaxe holders, reinforcements at the rear of the body tub, and spare tire mounted above the left rear wheel. Chassis number was CJ3B-4PE-06020. 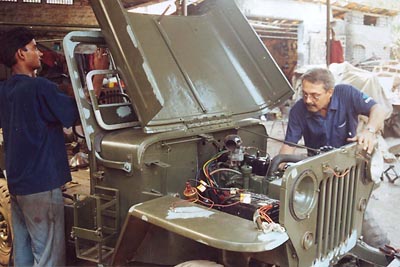 The Jeep was stripped down to the chassis (80K JPEG) at Uday's shop. Extensive bodywork (80K JPEG) included the fabrication of new parts such as fenders and hat channels (80K JPEG). See also the body painted in primer (70K JPEG)

In addition to a new windshield, tailgate and canvas top (80K JPEG), modifications included a Lucas TVS alternator, 11-inch drum brakes for the front, a tandem master cylinder, and free wheeling hubs in front. A closer view of the engine (80K JPEG) shows the all-new wiring.

In tribute to its history as a gun carrier, Anirban says, "I call my Jeep 'Agni' (the God of Fire)."

Also on CJ3B.info, see a similar Mahindra Jeep made in Switzerland as the "Sabavia Commando." 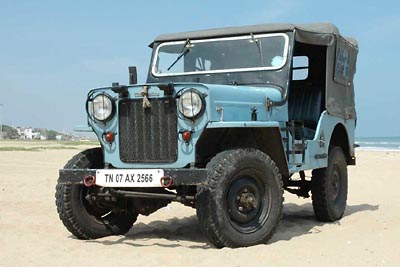 As with the Army Jeep above, this Jeep has a gasoline-powered Hurricane engine rather than a diesel. Arkaprava comments, "The petrol CJ-3B (F4-134) is the most powerful vehicle (75BHP and 114 ft.lbs torque) made in India, up to 1995-96 for the Armed Forces." 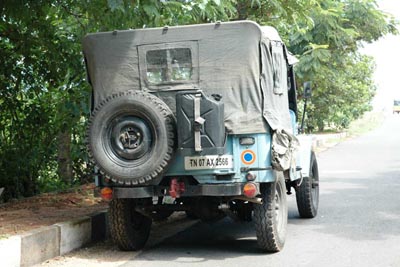 The rear view shows the IAF roundel and some distinctive blackout taillights, in addition to street-legal taillights added to the bumper. A right side view (120K JPEG) gives a better look at the canvas pouch and shovel bracket. 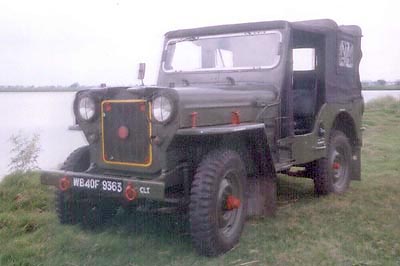 Rajdeep DattaRoy is the owner of another Indian Army Jeep which was restored at Uday Bhan Singh's shop. Rajdeep says, "This jeep servedunder a unit of 2 Mountain Division based in Dinjan,Assam.

"I had the canvas painted blackto help it keep out the water and increase its life.The flip side is that it has become a bit hard. Butthen, this was SOP in the Army in the CJ3B days."

Perhaps that's why Rajdeep calls his Jeep "Rhino Boy." Note: The "CL I" on the fender is an abbreviation ofClass I. The Indian Army classifies vehicles from Class I toV, depending on the condition of the vehicle. 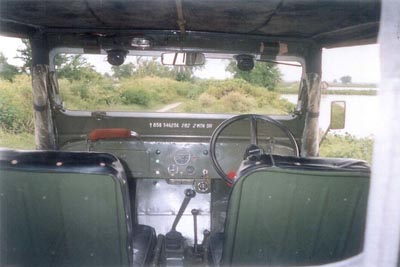 "Though I don't knowwhich unit it belonged to, the tactical sign was 282. This,the BA number and the division are written on theglass frame on the inside. All Iknow is that it belonged to the Commanding Officer ofthe unit. There was a CO plate attached to the glassframe on the outside, under the windscreen, bang inthe middle." 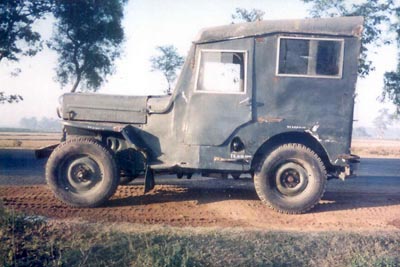 Rajdeep took this photo shortly after purchasing the Jeep. "As you can see, it looks monstrous with that hardtop, given to provide it all-weathercapability for the CO and his family. The first thing we had to do was get rid of the ghastly hardtop. That one thing transformed an ugly duckling into a swan."

The Jeep was then dismantled to frame and drivetrain (80K JPEG). As for the body, Rajdeep says, "We had to get rid of the entire hindquarters. The floor at the back was totally remade." See a photo of the bodywork (80K JPEG).

2nd Mountain Division has a long history including valorous action during World War II. Rajdeep adds, "My late father was Staff Captain Q of this Division in his bachelor days so I have an added attachment for my Jeep."

There's a good chance this Jeep saw service on the frontiers with China and Pakistan in northern India, where I photographed the Jeeps of Ladakh in 1990. 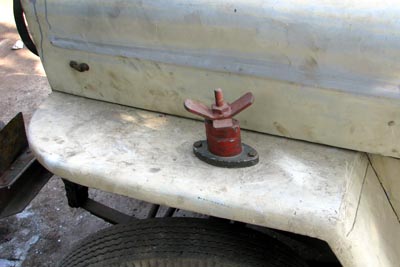 Thanks to Pushkin Ahuja for photos of some of the details found on Mahindra Jeeps built for the Indian military. The left front fender carries this bracket which holds down the head of a pickaxe, while the handle is mounted across the top of the cowl, in front of the windshield. 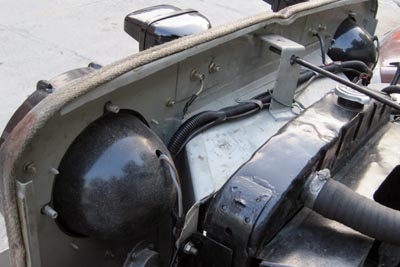 A pair of blackout lights are mounted on the front, above the radiator guard. 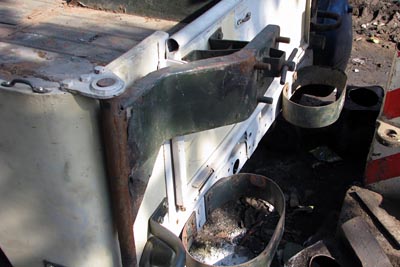 The rear mount for the spare tire is hinged to allow the tailgate to open. Bumperettes and a pintle hook for a trailer, are attached to the rear frame member.

Thanks to Uday and the owners who are saving these interesting high hood Jeeps. -- Derek Redmond