The Air Division was the most mixed part of ONUC, with staff from a great many countries. With the exception of the fighter squadrons, the air squadrons were all created by ONUC from scratch, and fully equipped by the United Nations. This included the vehicles they used. The fighter squadrons also largely used UN-supplied vehicles, since they seldom brought enough from home. The Air Division was mainly based in Leopoldville and at the large ex-Belgian Air Force Kamina air base in Katanga, but also had smaller detachments, all known as Air Transport Bases (ATB), at several other locations.

Like the ONUC ground forces, the air units used mainly CJ-5s and some CJ-6s. They did not differ in general appearance from any other ONUC Jeeps and rarely carried any squadron markings, but were frequently marked "ATB" on front and rear. 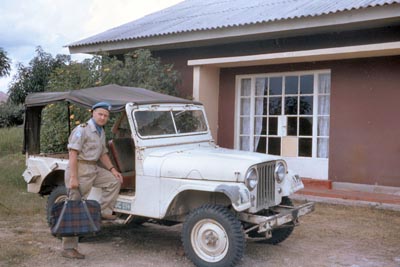 W/O Wesslén of the F 22 fighter squadron with a standard ONUC CJ-5 belonging to the Kamina ATB (see the Congo map), outside one of the staff villas in early 1963. The paint is peeling, showing what looks like grey primer under the white paint -- especially where an earlier chaff screen over the grill has been removed. Since these Jeeps were pool vehicles they did not always receive the best care. The UN flash in light blue and white on the hood is, as usual, only applied on the left side, and not visible from this angle. (Photo via C-G Wesslén) 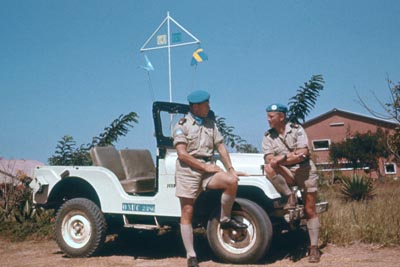 Two Swedish air officers having a discussion in the residential section of the Kamina base. The pole behind them is flying the UN and the Swedish flags, and carries a UN insignia and the badge of the UN 22nd Fighter Squadron (F 22). The Jeep has a black windscreen frame, as was fairly common with ONUC CJ-5s and -6s, presumably because this was a standard feature of many civilian Jeeps produced in the early 1960s. (Photo via Lennart Engerby) 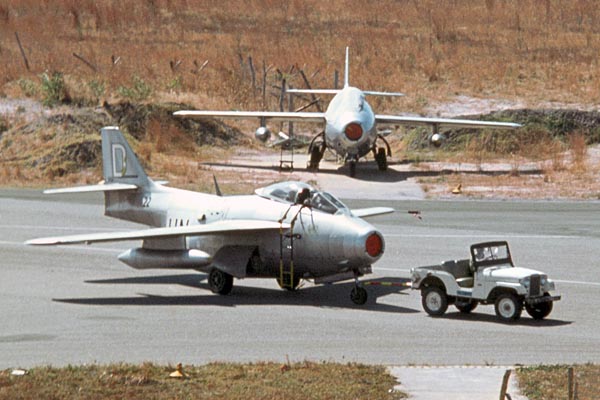 Something you don't see every day: a CJ-5 towing a jet fighter. This was also at Kamina and the aircraft is a SAAB J 29B of the F 22 squadron. The squadron moved to Katanga in December 1961, during the second round of fighting with Katanga. The aircraft pen in the background is a remnant from colonial days; new pens were built later to protect from Katangese air attacks. The Jeeps were also supplanted by a couple of Volvo towing trucks. (Photo © Kjell Magnusson)

A second photo (© Hans Nordberg) shows a CJ-6 on similar towing duty (260K JPEG) in Luluabourg in 1961, before the move to Kamina. 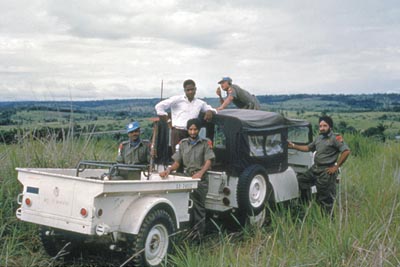 The Air Division for a period included two small Air Contact Teams, to lead the fighter aircraft against ground targets. The teams were largely staffed by Indians and their English tended to cause some problems in the communication with the pilots (except those of the Indian squadron, of course). Each team had a CJ-6 with a trailer, in this case a standard M100 1/4 ton Jeep trailer from the 1950s, which seems to carry a radio set with built-in generator. (Photo © Hans Nordberg) 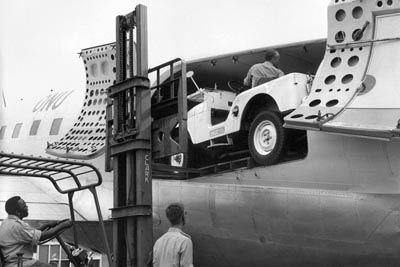 Much of ONUCs air transport inside the Congo was carried out by chartered civilian DC-4 and C-46 aircraft. This crew is loading a palletized CJ-5 aboard a C-46 belonging to the Swedish Transair company, one of the major charter operators in the Congo. Once aboard, the pallet could presumably be removed and the Jeep driven forward, allowing more Jeeps to be loaded. (Photo Transair archive)

Within ONUC, the Air Division was the largest long-term user of flat-fender Jeeps, together with the Indian contingent (see Part 8.) Since these vehicles were used as runabouts on the airfields and the monthly mileage was low, mechanical reliability was not too much of an issue. The origin of these older Jeeps -- there were not very many in use -- was no doubt mixed, most if not all of them being acquired locally. 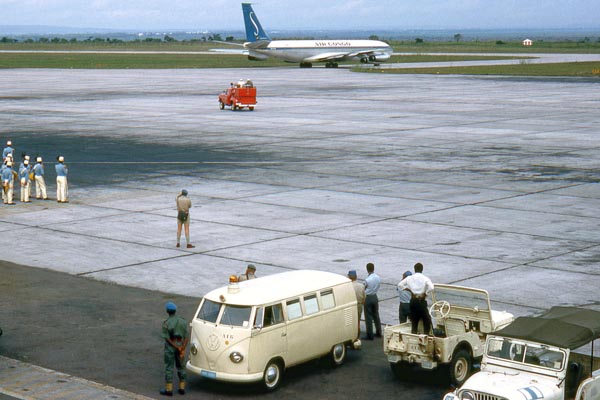 The details of the ATB Jeep seen from behind in this photo from the N'Djili airport in Leopoldville in 1963 show it to be an M38 rather than a CJ-3A. It has been completely repainted in off-white, even down to the steering wheel, and has a reflex mounted in the centre of the empty spare wheel bracket at the rear. The soldiers are watching a Boeing 707 taxi out to take President Kasa-Vubu on a trip abroad, after being seen off by the Republican Guard members on the left. (Photo © Einar Garnes) 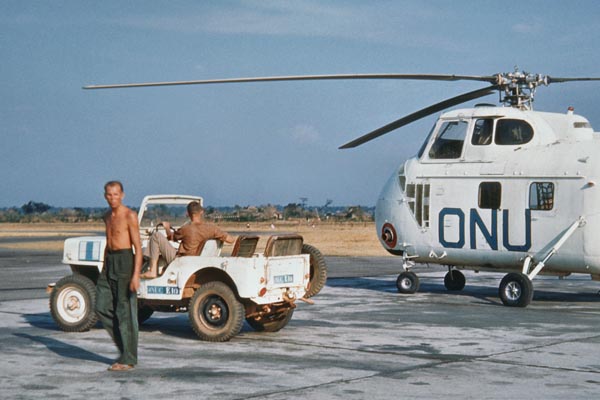 This scruffy-looking CJ-3B of uncertain origins was used in Elisabethville (see the Congo map) in late 1962. It has a non-standard registration -- "E10" rather than the normal three- or four-digit number -- which means it was most likely "found" at or near the airport, but the configuration does not match the typical colonial Force Publique Jeeps (see Part 1.) The helicopter is a Sikorsky H-19D, the standard chopper type of ONUC, who had 16 of them. (Photo © Ragnar Lind) 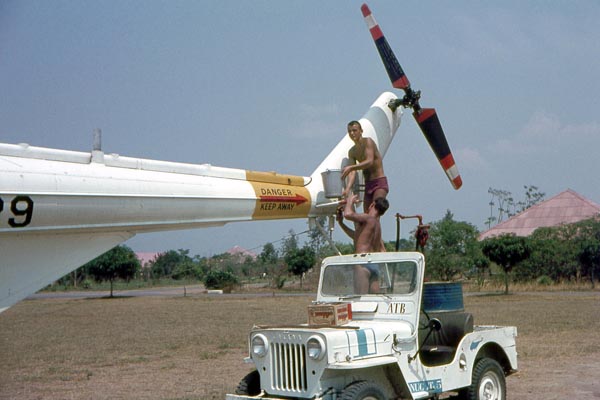 At Kamina, these Swedish helicopter mechanics of the ONUC Air Transport Base use a hybrid Jeep as a working platform. The CJ-3B has a windshield taken from a CJ-3A, resulting in a very high Jeep indeed.

There is a small extra light on the fender, of a type not normally seen on Congolese military CJ-3Bs, and the front seat is of the bench type so it may have been a civilian Jeep abandoned at the base in 1960. Its registration is also non-standard ("ATB5") and it has a little drawing of a Sikorsky S-55 helicopter on the side. (Photo © Lars Carlsson)

A photo from the Swedish Aviation Historical Society archives shows the same Jeep from the rear (250K JPEG) in August 1962, when some former Belgian T-6 trainers staged through Kamina. This Jeep unusually had a blue and white flash on both sides of the hood.

Jeep pickups and stake trucks were used as utility vehicles throughout ONUC and pickups in particular were seen around ONUC aircraft on a regular basis. They were normally vehicles in stock configuration and without any distinguishing features. The following photos are just a few samples from various airfields. 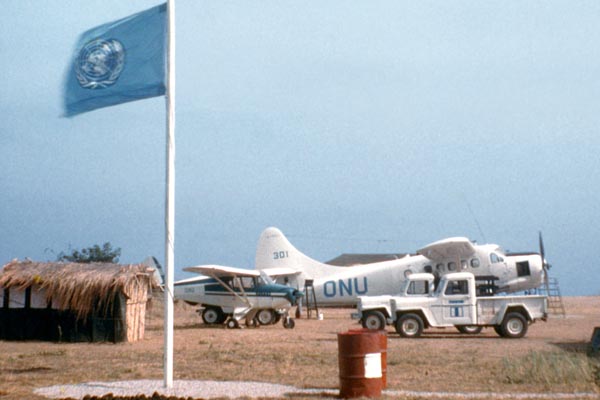 ONUC used both the pickup and stake truck versions and one of each is seen here at the old airfield in Albertville. Although not clear in this view, they both have the one-piece windshield found on late 1960 models onward. The DHC Otter behind them belonged to ONUC's Support Squadron while the Piper Tri-Pacer was a war prize taken from the Katangese. (Photo © Harry Sundberg) 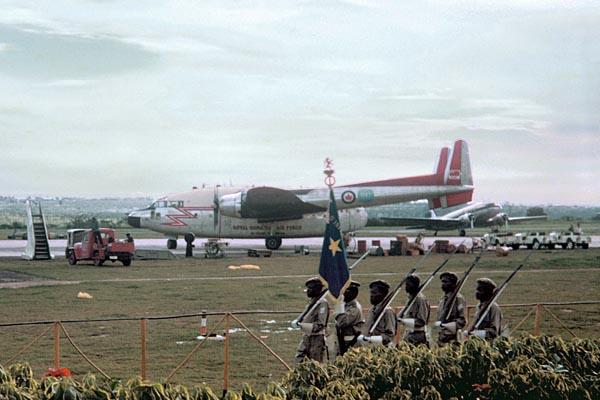 Canada's contribution to ONUC lay mainly in communications and headquarters staff, but in the fall of 1961 two RCAF C-119Fs were temporarily lent to ONUC and given UN insignia. These Congolese soldiers at Luluabourg airport are marching past one of these Canadian transports, with a chartered Swedish DC-3 in the background. The Congolese airports were at this time largely operated by the United Nations and ICAO, and the airport fire brigade Jeep pickup on the left was therefore arguably a UN vehicle. On the right is a standard ONUC CJ-5 and two CJ-6s. (Photo via Alf Blume) 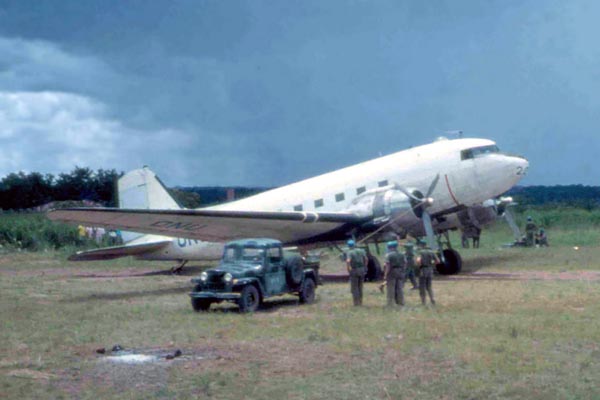 The versatile Jeep! One of ONUC's DC-3s had a starter motor problem at a small airfield and a Jeep Pickup was brought in to assist. A rope was wrapped around the propeller hub and tied to the hitch on the pickup, which then pulled the prop around to bump start the engine. The Jeep was painted in the camouflage pattern used on some ONUC vehicles in Katanga in 1963. (Photo © Sten Johnson via Swedish Aviation Historical Society)

Continue to Part 10: Standard M606s or return to the Table of Contents.