There was a bewildering array of mercenary units in the Congo in the 1964 to 1966 period but most of them came under the administrative umbrella of either 5 or 6 Commando. Many were small detachments embedded in Congolese units while others were largely independent. When the French mercenary officer Bob Denard -- who had earlier served in Katanga -- returned to the Congo in early 1965 he was authorized to set up an elite assault unit, called the 1er Choc (or just 1 Choc) under 6 Commando. This was based in northern Congo and used a variety of armored vehicles, including many M606s. 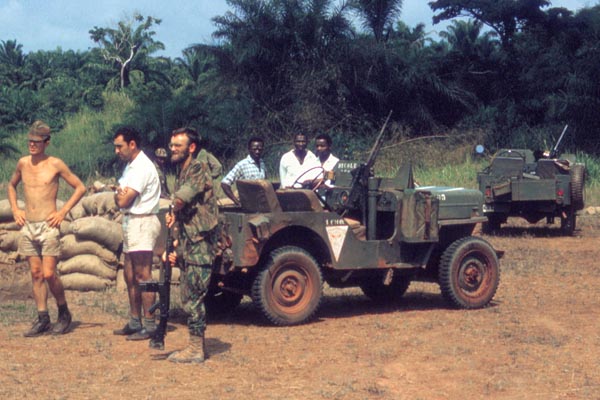 Two M606s of 1 Choc in Buta (see the Congo map) in the spring of 1965. Both have only modest modifications, with an armored windscreen and a sturdy gun pylon in front of the passenger. The nearest Jeep, "Nicole Luc", has an FN MAG machine gun (and a hand grenade hanging from the ammo box) while the one in front has a Browning .30-cal. Instead of the customary large storage bin at the rear, they have a box bolted on with angle irons. (Photo © Bob Houcke) 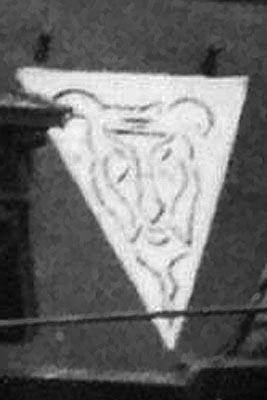 The triangular badge on the side of the Jeep above is the unit insignia of 1 Choc.

This photo shows another version of the 1 Choc badge, which depicted a "Baluba devil." A similar badge had earlier been used by Denard's unit in Katanga. The 1 Choc badge was always red on white but there was considerable difference in the details of the figures applied to different vehicles. 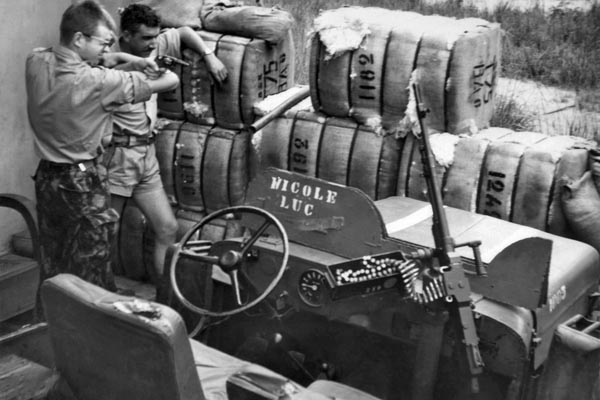 Some details of "Nicole Luc" seen in the first photo. The three-plate sandwich construction of the shield is clearly visible. The bracket in front of the steering wheel was probably used to hold a spare ammunition box for the machine gun. Note that the Jeep has the later style of instrument panel, with a large central dial and cover plates over some of the smaller openings. The men in the background are trying out a snub nosed revolver: not a common weapon in the Congo. (Photo via Marc Robyn) 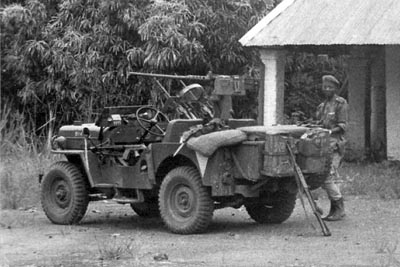 An M606 with all the trimmings belonging to 1 Choc in Paulis in May 1965, parked in front of the building where some of the mercenaries lived. It is armed with a Browning .50-cal. machine gun and a double FN gun mounting taken from a decommissioned Minerva. The only armor is a small screen in front of the driver. The storage box at the rear has in turn been fitted with holders for two jerry cans; with a gunner and some extra ammunition in the back, the Jeep would no doubt have been very rear heavy. (Photo via J-P Sonck) 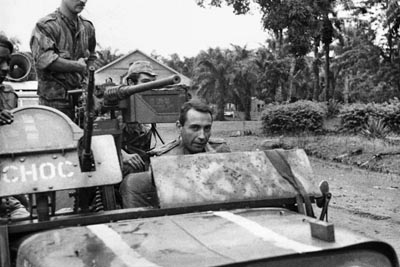 The same Jeep as above, seen from the front. Here it can be seen that it has a square rod across the top, with a vertical support on one side, and that the armor shield is mounted on the rod rather than direct on the body. (Photo via J-P Sonck) 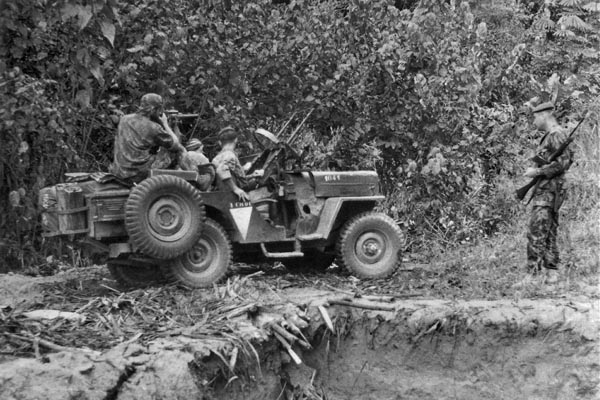 Another M606 similar to the one above, but fitted with a .30-cal. Bob Denard on the right watches as the Jeep is driven around a large and deep trap dug in the road by the Simba rebels. The round hole in the damaged part of the body behind the fender was for the optional fresh-air heater: rather unnecessary in the Congo and therefore normally covered by a small hatch. (Photo via J-P Sonck) 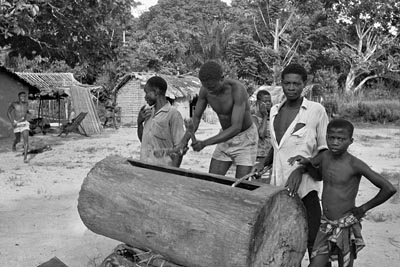 News of approaching military columns would spread from village to village by drums, which still played an important role in communications in the Congo. When mercenaries and their Jeeps were spotted, the message "The White Giants are Coming!" would go out. (Photo © Jan Hekker) 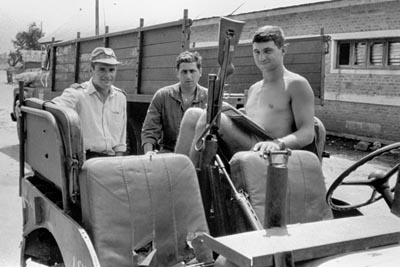 Mercenary pilots of the Congolese Air Force with a Jeep of 1 Choc in Boende (see the Congo map) in 1965. The horizontal steel plate on the cowl plus the shield for the driver just visible on the right suggest that it normally had a Minerva twin-gun mounting installed. The M606 had also been modified with two folding rear seats, one on each side. The weapon stuck into the rear machine gun pylon is an Italian Beretta M1938 sub-machine gun, fairly common in the Congo. (Photo via Ares Klootwyk) 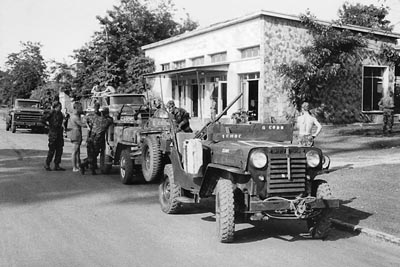 Paulis in May 1965, during preparations for 1 Choc's advance on Wamba. "Claire" was a much more basic armored conversion and was in most respects similar to "Titine" shown in Part 11, even if the grille slats are a bit different. The Jeep behind it is seen in more detail in the photo below. (Photo via J-C Laponterique) 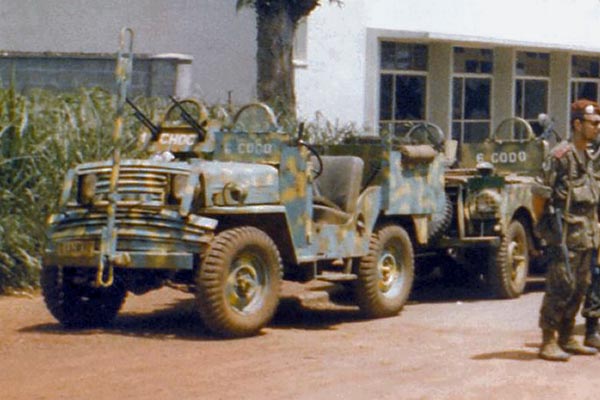 One of the most heavily modified examples in the Congo, this M606 seen in Paulis in May 1965 is hardly even recognizable as a Jeep. It has both the twin-gun mounting and the driver's screen from a Minerva TT such as the one behind it, and small side plates. The armor at the front consists of truck spring leaves, a tow bar has been fitted as a wire cutter and the rear has been encased in a steel box. (Photo © Jacques Noël) 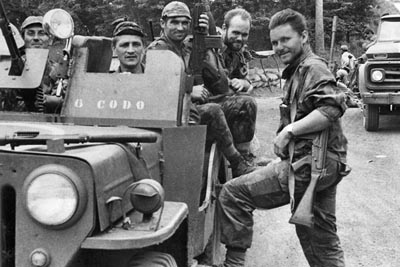 This M606 has a similar basic design to some of those seen above but has a larger shield for the driver, with a searchlight fitted to it. The Jeep also has small side armor plates for added protection but there are no slats in front of the grill. There are four sideward-facing seats fitted in the rear -- two of the backs are visible between the men in the front -- which show that this was one of the lead vehicles for the column, where the soldiers in the back were ready to jump off immediately in case of ambush. The photo was taken just before the departure from Buta towards Aketi on July 4, 1965. (Photo via J-P Sonck) 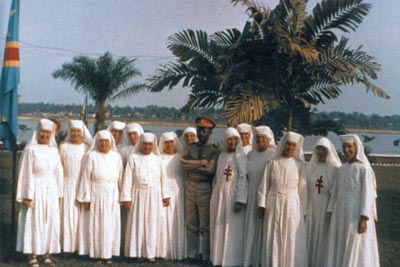 A group of Catholic nuns rescued by 1 Choc of 6 Commando on June 26, 1965, in the Buta area. Here they are posing in Stanleyville with Colonel Mulamba of the ANC. The cross on the dress of two of the nuns is the Cross of Lorraine, which was the symbol of the Sisters of the Infant Jesus of Nivelles. (Photo via Marc Robyn) 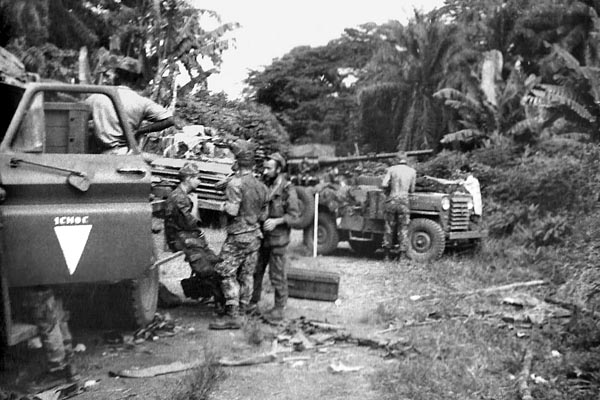 This is the only known photo of an M606 in the Congo with a 75mm recoilless rifle -- as opposed to a pre-independence CJ-3B (see Part 1). But there were not many targets that justified a weapon of this type, which was really quite unsuited to jungle warfare.

The Chevrolet trucks were typical of the civilian style vehicles delivered as US military aid, together with the M606s. (Photo via Henri Clement) 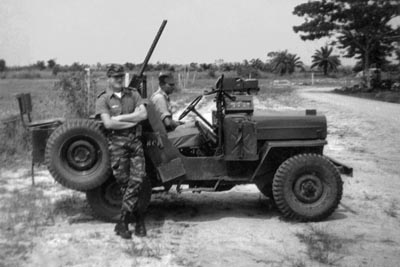 A nice view of a typical armed but unarmored M606 of 6 Commando, of the type shown in Part 10. What is of interest here is the vehicle in the background: see the separate enlargement (50K JPEG). It shows a heavily armored Jeep: probably an M606, or possibly a CJ-5. It obviously had armor plating around the engine compartment but no other details are known. (Photo via Marc Robyn)

As the Simba rebellion wound down from mid-1965 the need for the armored Jeeps decreased and they were gradually taken out of service. It is likely that few new ones were converted after 1966, even if a few existing ones lingered in service here and there for some time.

Continue to Part 13: Other Willys Jeeps or return to the Table of Contents.