A Brief History of the CJ-3B

The Willys Universal Jeep CJ-3B was built between 1952 and 1968. It had flat front fenders like earlier Jeep models (such as the CJ-2A and CJ-3A), but can be distinguished by a higher hood profile. Later Jeeps have more rounded fenders and hood. See the photos below:

For more details on the other Universal Jeep models, see Universal Jeep History. For information on other Jeep brand vehicles made by Willys, including trucks and station wagons, see Siblings of the CJ-3B and Web Links.

The Universal Jeep CJ-3B was introduced as a 1953 model by Willys-Overland, the company which had produced some 360,000 jeeps used during World War 2, and almost as many civilian Jeeps (CJ's) in the seven years since the war. 1953 was also the year Willys-Overland was sold to the Kaiser-Frazer Corporation, who used the Willys Motors name until 1964 (see When the CJ-3B Was New). 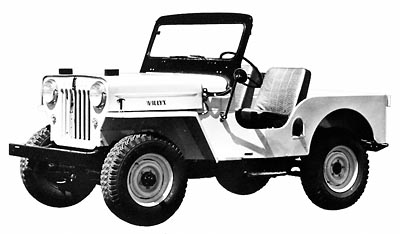 One limitation of the wartime jeeps, and the postwar civilian models CJ-2A and CJ-3A, was the limited horsepower of the 4-cylinder L-head "Go-Devil" engine. The new F-head "Hurricane" engine, which Willys began putting in its larger vehicles in 1949, had its intake valves in the head rather than the engine block, allowing them to be larger. The first Jeep big enough for the engine was the military M38A1 in 1951. (The M38A1 was also the debut of the new "round-fender" body design that would be used for most of the Jeeps of the next five decades.) The first civilian Universal Jeep with the Hurricane engine was the new "high-hood" CJ-3B (see a post-1961 factory photo at right).

The CJ-3B was introduced as a transitional model between the flat-fender CJ-3A, and the forthcoming CJ-5, the civilian version of the M38A1. The 3B had flat front fenders, but a higher-profile hood to accomodate the F-head engine. It offered higher horsepower and torque than the 3A, and a new, quieter 4WD transfer case. Other designs were tested, including the CJ-4 with the beginnings of a rounded hood and fenders, but only a few prototypes were built (see New Universal Jeep Designs, 1949-52.) 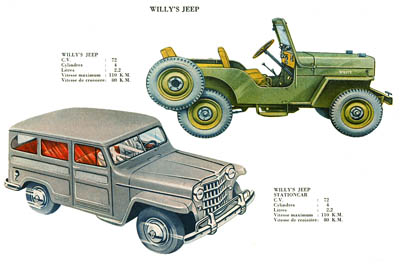 This painting shows two of the popular Willys vehicles of the early fifties, the CJ-3B and the Station Wagon. The source of the illustration is unknown, but the printed specifications are in French. 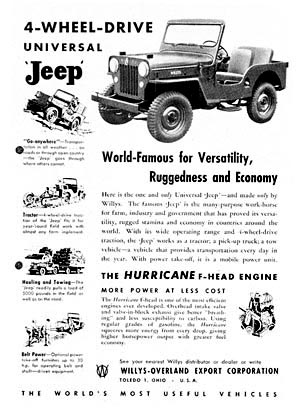 A page from the Willys-Overland Export Corporation catalog of "the world's most useful vehicles" from the brief period in the early 1950s when the CJ-3B was the only CJ being produced, describes the versatility of the "one and only Universal Jeep", which "works as a tractor; a pick-up truck; a tow vehicle -- a vehicle that provides transportation every day in the year. With power take-off, it is a mobile power unit."

It also says "The Hurricane F-head is one of the most efficient engines ever developed. Overhead intake valve and valve-in-block exhaust give better breathing and less susceptibility to carbon. Using regular grades of gasoline, the Hurricane squeezes more energy from every drop, giving higher horsepower output with greater fuel economy."

Jeep models based on the CJ-3B, including longer wheelbase versions (sometimes misleadingly referred to by the manufacturers as the CJ-4 or CJ-6), were built by a number of licenced firms around the world, including Mahindra & Mahindra in India (the last company still making models based on the CJ-3B). For more information, see Jeeps Around the World.

If you own a CJ-3B, please feel free to submit your serial number (VIN) and engine number for the list of Surviving CJ-3B Jeeps.

For web sites offering information on other models, see the Links page.

Thanks to Tom Edwards of Syracuse for the CJ-2A photo above, Eric and Sharon Lawson of Phoenix for the CJ-5, and John Esford for the painting.