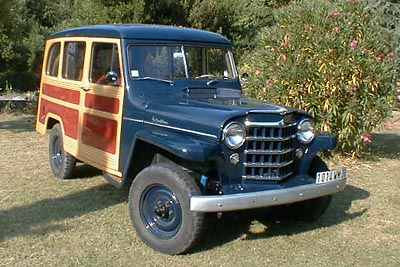 The eldest sibling of the CJ-3B, and grandfather of the modern "SUV," was the Willys Jeep Station Wagon (210K JPEG), first manufactured in 1946 in two-wheel drive, and 1947 in four-wheel drive. The wagon stayed in the Jeep lineup until 1965, the same year that production of the CJ-3B for the North American market came to a halt.

The Station Wagon in this photo was built in the same year as the first CJ-3Bs; the five horizontal bars on the grille are unique to 1950-53 models. The wood trim is actually stamped metal, and the emblem on the side of the hood reads "4 Wheel Drive." 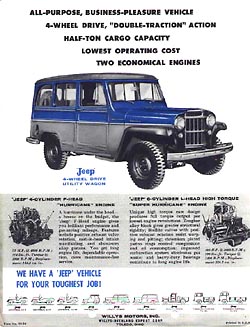 Short spotter's guide: From 1946 until 1949 the grille on the wagons was flat; in April 1950 it changed to a sharper peak in the center, with five horizontal bars. In 1954 the number of bars was reduced to three. In 1956 the three bars were not evenly spaced, with the middle one closer to the top, but after 1956 the grille returned to the three evenly-spaced bars. During 1959-60, a one-piece windshield was phased in.

In 1955 the 4WD Station Wagon officially became the "Utility Wagon." The brochure seen here for the 4x4 Utility Wagon illustrates the optional Super Hurricane L-head 6-cylinder engine first offered in 1954. (The Hurricane F-head 4 had replaced the original L-head 4 as the wagon's standard engine in 1950.) In 1962, the slightly larger 230 ci overhead cam Tornado became the 6-cylinder option. 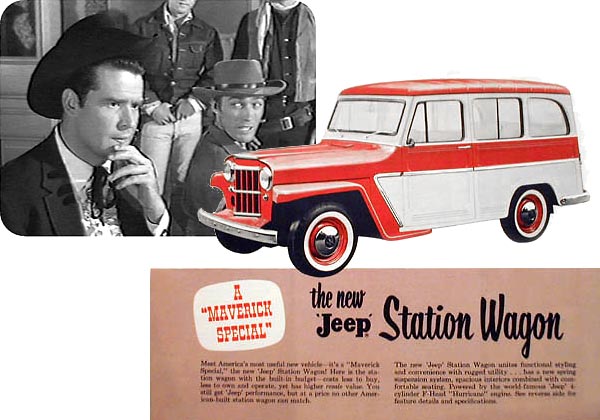 In 1958, Willys Motors decided to try and update the aging image of the wagons with a new two-wheel-drive trim package known as the Maverick Special, named after (and advertised extensively on) the TV show Maverick, starring James Garner as good guy gambler Brett Maverick. The 1959 episode "Duel at Sundown" seen in the background above, guest-starred a young Clint Eastwood as the bad guy, Red Hardigan.

(Note that although the illustration above has been reproduced elsewhere on the web and identified as an original ad for the Maverick, it was in fact created for CJ3B.info using an advertisement (40K JPEG) and an actual frame from the TV show.) 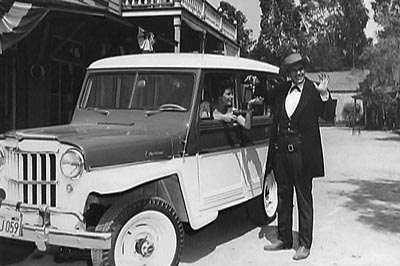 Maverick was apparently picked by Willys owner Henry Kaiser himself, despite the fact that it was an old-time western featuring horses and stage coaches, with no place for Jeep product placement along the lines of Nellybelle on the modern-day western The Roy Rogers Show, earlier in the fifties. Oddly enough, when co-star Jack Kelly posed with a wagon on the set of the show (right), it was a 4WD model rather than the 2WD Maverick Special. 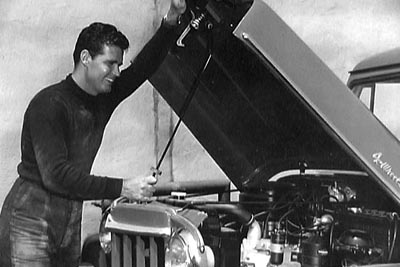 James Garner also took a look under the hood, and posed with Kelly and two Willys wagons on the backlot (50K JPEG). Garner left Maverick in 1960 and the TV show was cancelled in 1962, but the Maverick Special wagon apparently lasted until 1964.

If you want to talk about product placement, check out the starring role for a Willys wagon in the 1963 movie It's a Mad Mad Mad Mad World, directed by Stanley Kramer. The film was basically one long, complicated, slapstick car chase (and was remade as Rat Race in 2001). Its all-star comedy cast included Terry Thomas and Milton Berle, seen here, plus Spencer Tracy, Mickey Rooney, Phil Silvers, Ethel Merman and more. It also had cameo appearances by many other familiar names and faces, including the Three Stooges in their last movie together, as three firemen.

The wagon does well, on-road and off-road, for one group of characters racing for the buried treasure, until their abuse of the Jeep finally results in the loss of a wheel, and the rollover seen here. Click any of the frames from the movie here, to see a larger version (40K JPEG). One interesting detail visible in the last frame is the presence of the "Jeep 4 Wheel Drive" stencil on the tailgate, which is not often seen on a wagon.

Jim Veen has this great recollection: "When that movie came out, I realized that I had been to many of the locations where it was filmed (I was born and raised in L.A.) I knew exactly where they flipped the Jeep wagon in Lancaster, California as my best friend and his dad took me on many trips to the high desert and we went thru that tunnel many times.

"Well, I talked Ralph's dad into taking us out to the tunnel. We parked the Nash and within 5 minutes found the scrapes and skid marks where they flipped the Jeep. You could also see the tire grooves in the dirt just before it flipped over. That was forty years ago when I was 13 years old. Ralph and I have a few funny stories as his dad had a Jeep wagon (about a 1950), a WW2 jeep and a CJ-5, and his dad was very liberal about driving age."

By 1963, the station wagon was definitely looking old-fashioned, but Kaiser Jeep, like Willys-Overland before it, was never in a hurry to fix something that wasn't broken. So as with the CJ-3B, production of the wagons continued for longer than you might have expected, in fact for a full year after the new Wagoneer (80K JPEG) debuted in 1963.

And two decades later, when James Garner returned for the TV movie Bret Maverick in 1981, the Wagoneer itself was still going strong. 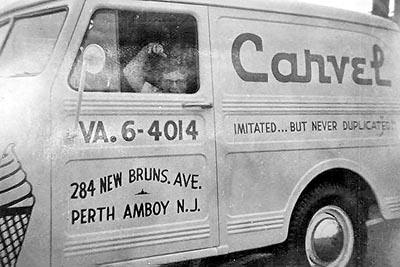 Here's a Willys Panel Delivery truck which brought a lot of pleasure to residents of Perth Amboy NJ, where it stood outside the Carvel ice cream store from the 1950s into the 70s. Jerry Trabalka remembers it, and spotted this photo by Richard Stakovsky in the Amboy Guardian (18 April 2018.)

The Panel Delivery was a Station Wagon with side-opening rear doors, and no side windows. It too was available in both two- and four-wheel drive. The model name became the "Utility Delivery" from 1955 until production of these venerable wagons was discontinued by Kaiser in 1964.


Thanks to Jean-Francois Lavie and Jim Veen. Also Mladen Milosevic who has posted video of the Mad Mad Mad Mad World scene on YouTube. -- Derek Redmond

See more on the Jeep Station Wagon in many of the brochures and ads in the CJ-3B Advertising and Literature section of CJ3B.info.

Elsewhere on the web, the wagons are covered in some detail in Richard Grover's Willys Jeep Trucks website. See also Willys' Wagon at Hemmings Motor News.