Things Are Not Always What They Seem...

It's often worthwhile to take a closer look when you see what appears to be an unusual military Jeep. 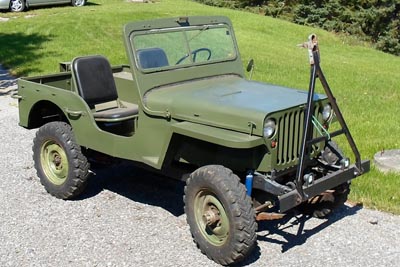 Richard Cloutier of Chicoutimi, Quebec sent a photo of his 1963 CJ-3B: "We junked the old tub and fabricated a new one with measurements from the old one. I installed an MB grille on it. The rest is fabricated by hand with new heavy gauge sheet metal. When looking closely, one can tell that a few things aren't factory made. But it turned out real good, and so solid. This thing is like a WWII Sherman. The body is now raised a few inches off the frame so to eliminate the tall hood. I'm pretty sure the engine belongs to the original chassis."

Someone in Indonesia had a similar idea for this 1959 CJ-3B, serial number 57348 55010, which also still has the original engine (see the Serial and Engine Number List.) Etiënne Nijenhuis in the Netherlands says, "I bought this CJ-3B from a Dutch Army Engineer. He bought it around 1999 in Indonesia. The former owner was a doctor who still drove it everyday doing his house calls in the jungle of Lombok. It hasn't got the back hatch (50K JPEG), and it hasn't got the round wheel openings, but square. Somebody (the famous craftmanship of car fixers in the jungle I guess) spent a long time reshaping this car." 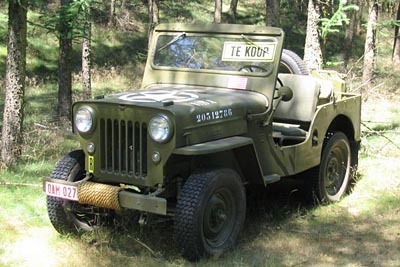 This CJ-3B dressed as a Willys MB belongs to an enthusiast in Belgium who didn't want to go as far as Richard in his recreation of a World War II jeep, but he did give it an invasion star. Luis Mariano Paz spotted it on the web.

See also CJ-3B in the Movies: Patton for a CJ-3B playing a movie role as General Patton's jeep in World War II. 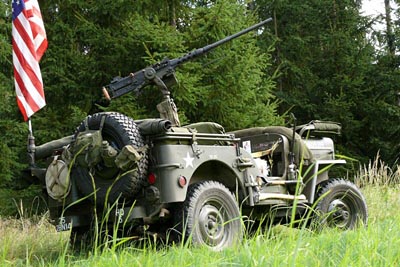 A lot of the Jeeping in Eastern Europe is focussed on WWII reenactment, so Ladislav Sulc also decided to go with that style when he restored a former Swiss Army CJ-3B. Lada lives in Prague, and says, "I worked more than four years on it. I dismantled the car to the last screw. And from the frame I started to build it again. With the exception of differentials I had disassembled everything. A non-original engine (Ford V6) replaced the original Hurricane. The last Swiss owner made many modifications (engine, gearbox, disc brakes, etc.) Luckily I had one wrecked CJ-3B 1960 for replacement parts." 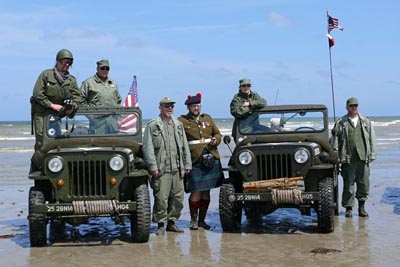 Lada and his friend Ales "Duck" Vanek made a trip to Normandy in 2009 with their matched pair of Army-style 3B's, and took a picture on Utah Beach with some other Jeep fans. Lada's wife Jitka and son David are riding with him.

Another photo shows Duck's 3B posing with some MB's (120K JPEG) at a 2007 military vehicle show in Lešany, located just south of Prague, and home to the large Lešany Military Technical Museum. 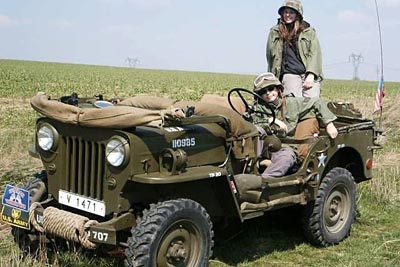 This CJ-3B dressed in U.S. Army livery is the work of Pavel Konopasek, also in the Czech Republic. We're not quite sure of the origins of this Jeep, but Pavel and his friends clearly have a good time with it. He writes, "My Jeep CJ3B is my beloved family member, and your web pages my best-loved. Thank you behind your pages." 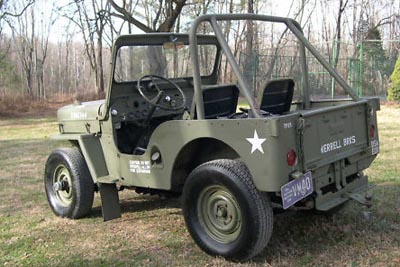 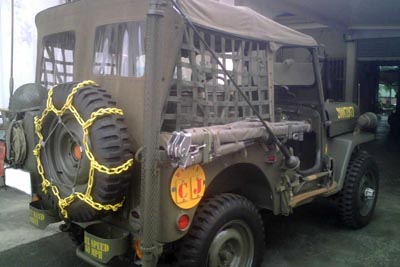 Military detailing can be fun, especially if you're not too worried about authenticity, and somebody clearly had a lot of fun with this Mitsubishi Jeep seen in an online auction from the Phillipines. With a "Willys CJ" unit designation on the side (and "M606" on the front,) it also has three radio antennas and just about every tool and accessory you could think of, strapped to all four sides. Unfortunately there doesn't seem to be a snorkel on the air intake, to go with the nice exhaust snorkel. See also the left side (80K JPEG). 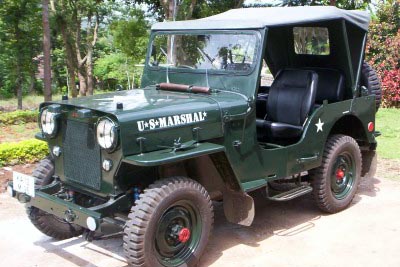 This imaginative "U.S. Marshal" Jeep is the work of Vikram Bopanna in Bangalore, India. These front and rear view (35K JPEG) photos show the many details added to what started out as a civilian Mahindra CJ340 in real need of restoration. Vikram was inspired partly by the 1954 "Military Police" Restoration on CJ3B.info. He says, "I wanted to name my Jeep something, but not Military Police or India Army with which I could get into trouble with the cops! I then remembered the movie U.S. Marshals and decided on it, so that none of the law enforcement agents here would have any objections." 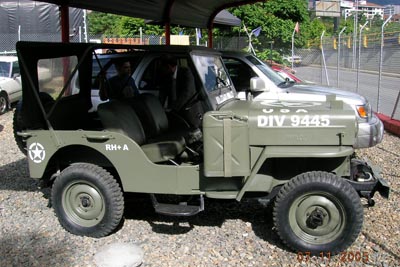 Somebody in Colombia wasn't worried about the cops, and gave this nice civilian CJ-3B (identified as a 1953) an imaginary U.S. military makeover including a "Military Police" stencil on the windshield frame. Andy Gil took the photo at a used car dealership in Medellin, Colombia in 2005. A left front photo (200K JPEG) shows the PTO winch, blackout light, invasion star on the hood, and miniature pioneer tools.

Or an even less convincing one (80K JPEG) photographed in 2005 by Bo Wiberg in Thailand, near the border with Laos and Cambodia. Whoever restored this Mitsubishi Jeep and added the fender flares clearly thinks the "U.S. Army" label has some "cool" value, and slaps it on everything they sell. 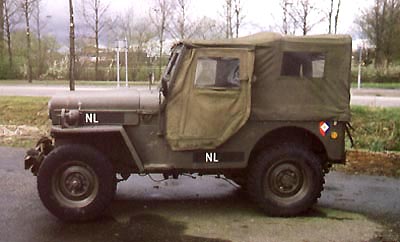 Cor Streutjens in the Netherlands reported in the summer of 2001, "During my search for a Dutch-built NEKAF M38A1, by chance I found a Jeep which looked like a Willys but wasn't. Information I got from your (excellent) site enabled me to identify the Jeep as a VIASA CJ3M from Spain with a Perkins diesel engine (20K JPEG)."

"A former owner had the Jeep falsely registered as a NEKAF and had removed identification marks such as the plate containing the chassis number screwed to the firewall. The Jeep is painted as a Dutch army Jeep in such a way that I believe it may be ex-Dutch army indeed. But underneath I have found the original Spanish army camouflage paint. There is a story saying that in the past the Spanish army bought a substantial lot of Dutch gear and in return the Dutch ordered some VIASA Jeeps. This Jeep might be one. It may also have been painted as Dutch army to resemble a NEKAF so someone could drive it on the NEKAF papers illegally." 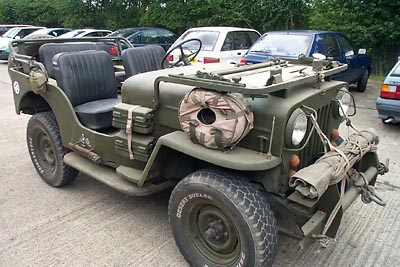 Here's a bit of a mystery that we've been trying to figure out for a while now. This unusual Jeep listed for sale in the UK appeared to be an M606, and it's in good shape with some interesting accessories, but it's not clear what its origins are. It was apparently restored about ten years ago, and has been well cared for since then. Some details, including the upholstery, tires, steps and radio aerial, are clearly not original.

Mounted equipment includes a winch and canvas tool roll on the front, two field telephones and a 2-mile coil of telephone wire. There is also a bomb trailer. This all makes for a very interesting vehicle, but it's hard to know how much of the equipment might have been added at the restoration stage.

The rear of the Jeep (80K JPEG) certainly looks like an M606, with its blackout taillights, trailer electrical socket, pintle hook and bumperettes.

Owner Dave Woods reports a chassis number of 331639 with matching engine number, which doesn't fit in with any Willys CJ-3B numbers. Although the grille is stamped Willys, that is also the case with some of the early Mitsubishi military 3B's built in Japan, and the headlight guards do suggest Mitsubishi. However, Morihisa Ochi points out that the swing-out windshield suggests M606 rather than Mitsubishi. 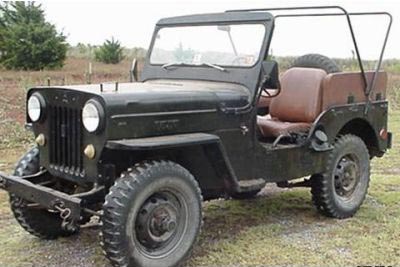 The huge gas cap, the details of the rear view (and of course the Mitsubishi logo visible in the front view!) are clues to the true identity of this Jeep as an early Mitsubishi Japanese military Jeep. It would be interesting to know how it got to Oklahoma, with a serial number from a 1954 stripped chassis CJ-3B. It sold for over $3000! 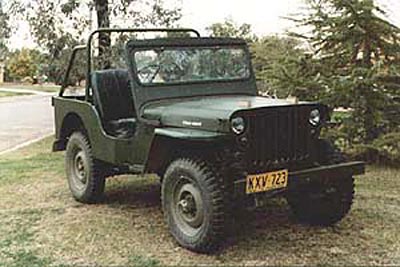 Charles Baron originally restored this right-hand-drive CJ-3B twenty years ago in Australia, but five years later did what is to some the unthinkable: "I took the inserts out of the side of the cowl, cut the firewall, and installed a GPW grille and hood.

"I overcame the carburetor problem by installing a 1 1/2" SU carburetor on a manifold with 3 steam pipe bends, actuated by a cable throttle. The F-head has been rebuilt to 60 thou. oversize, and the compression upped to 7.5:1. The engine has now done 8000 miles and runs like a clock."

See Jeeps in Australia for more details on CJ-3Bs imported and assembled downunder.

Here's another fun photo from Australia. Jon Rogers is using his CJ-3B which is actually a 1956 right-hand-drive civilian version, to bring home his new military restoration project, a 1944 GPW body.

Return to the Index of Unusual Photos or CJ-3B and M606 Military Jeeps.