I am located in beautiful Durango, Colorado; moved here from Phoenix a little over a year ago. I have owned maybe 16 CJ-3Bs over the last 26 years, out of 40-50 Willys and over 100 vintage 4x4's, military vehicles, etc. I love actual military rigs but if they are collectable you are not allowed very much in the way of artistic expression, or the "jeep police" come out of the woodwork to tell you how wrong it is.

So maybe 13 years ago I bought a CJ-2A for $600 at a yard sale, primer grey and really hideous looking. We lived in an apartment at the time so I had no garage or even a place to work on a Jeep. I bought a bunch of flat military spray paint, tape and newspaper, packed a cooler and went back into the woods to work on my Willys. When we drove that old rig into town a few days later in fresh full camo, we were stopped constantly by hunters asking to buy it. I finally offered up a price and the guy went and got cash on the spot, more than 3 times what I paid for it a few weeks earlier.

Needless to say, it made the gears start spinning in my head. Often while building something shiny and new to sell, I would have the military look on the side for myself and was always amazed at all the attention they got, more than a $10K restoration. I have since taken a ton of flatfenders, many not worthy of a restoration -- ranch rigs, beaters, but good runners -- and made them into flat green toys and fun again. 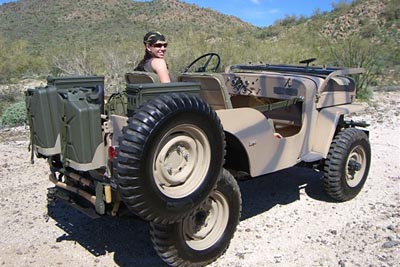 This 1954 was the nicest CJ-3B I have ever had -- maybe the sweetest Willys, period. It was put together frame-off by a guy named Mark out in Wickenburg AZ; 12-volt, stock drivetrain, new motor and springs, tan camo paint and a big ugly roll bar. Was really tight, new in almost every way. I bought it, removed the roll bar and started adding the stuff I like -- rope, ammo boxes, tools, etc.

My girlfriend Andrea Asbra drove it a lot. I always crack up at men's reactions when Andrea drives one of these down the main drag in Durango wearing a little camo halter top or something. I've seen them get slapped by their wives/girlfriends for staring -- very funny stuff. See also the October 2009 cover photo (150K JPEG). 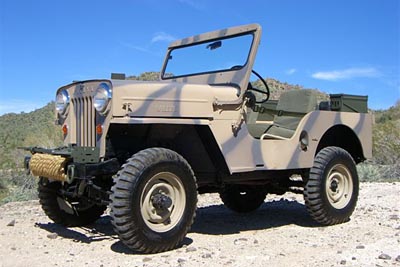 I had actually planned to keep it, but made the mistake of putting it on eBay "just to see where it would go" and was made a large offer I could not refuse. The buyer (great guy) gave it to his wife as a gift; she had one growing up on the family farm as a child in Wisconsin. We still wish we had this rig -- it was sweet, drove like new. A flashback in time when you got behind the wheel -- see an interior photo (120K JPEG). 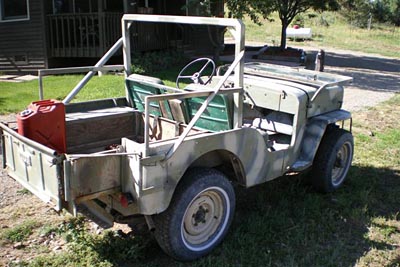 I found this '54 in Montrose, Colorado. Man, it was ugly with the big bed extension and a weird canoe rack on top. See a left side photo (80K JPEG). A few dents, some minor rust, but it ran and drove very well after a carb rebuild and some points. It had a lot of character, and after I got it home I figured out a way to make use of that bed extension. 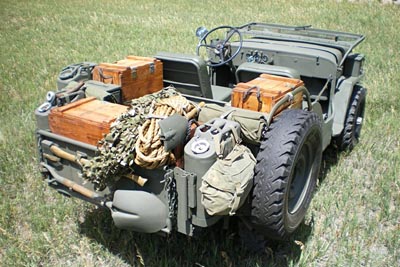 After cutting the rack off, I started looking at the bed extension and having thoughts. I liked the extra room but not the look. It wasn't quite so loaded with gear in the beginning, but friends kept bringing over military surplus, adding things until it became "the warwagon." Nicknamed by one of my neighbor's kids, it was the first Willys I bought after moving here to Durango. 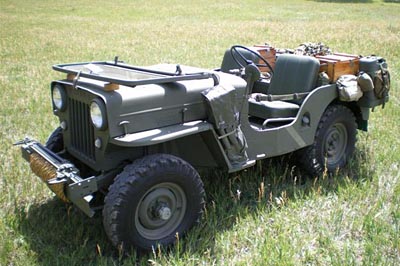 Nothing was era specific -- it wasn't meant to be anything in particular, just a cheap, fun rat-rod type build, and we liked the way it attracted a ton of attention. Every tourist and kid in downtown Durango (90K JPEG) loved this thing! Tourists come to Durango from all over the world to ride the train, etc. so they were in front of it constantly, having their pictures taken. 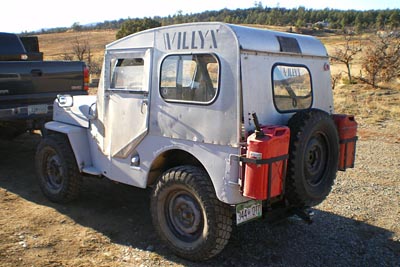 I found another '54 here in Durango last fall, left a note on it, and it turned out the guy wanted to sell. It was in grey primer, but underneath was an awesome body, very straight, no rust at all (originally from AZ). Original 6-volt, nothing modified other than a bolt-in roll cage. Had a rare Meyers super-light aluminum top and doors (see a front view photo, 150K JPEG.) The whole package weighed maybe 70 lbs. doors and all, and it was amazing how light it was when we lifted it off. 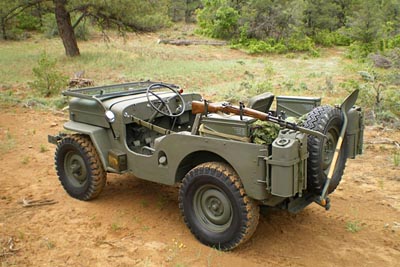 Ran and drove very well; it had had a good life somewhere, not ragged on or beat off-road. I just sold this rig a few weeks ago, no rust, still 6-volt. It now lives in Phoenix AZ where it's getting a frame-off desert tan paint job. 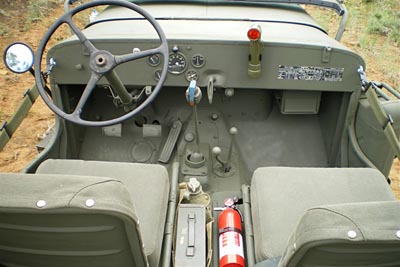 I did the military green upholstery on all the Jeeps, and I am now manufacturing and selling original style seats, built from every material you can imagine. Before I took this 3B to Phoenix I used it as a photo model for the camo seats (150K JPEG) I've been advertising on eBay. So far I've had a ton of e-mail with questions and quite a few orders. My team and I build water-repellent, super cool replacement seat cushions for original seat frames in various camouflages and also original-style vinyl. We are also making matching bikini tops, seat frame storage pockets, windshield covers, etc. 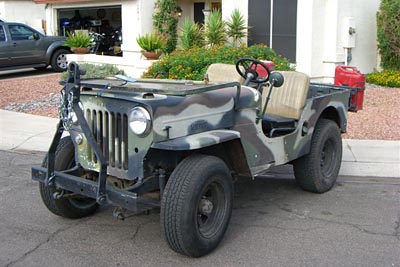 Found this one in Flagstaff AZ -- ugly but very straight, rust free. This 1960 was hidden in a backyard and was all stock everything, not counting the extras like roll bar, rear rack, etc. After being told it didn't run, we winched it onto the trailer and into the shop, and had it hotwired in about 5 minutes. 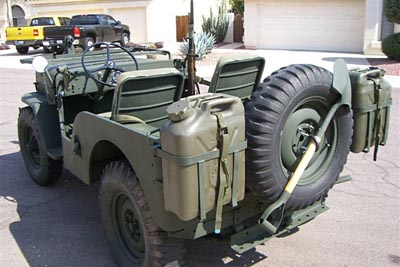 As it turned out, not only did it run but it purred, really in excellent shape. After you've had a bunch of flatfenders you can tell very quickly if one has been abused or not. This one, regardless of how it looked, had never been treated harshly, and was a smooth runner/driver in every way. 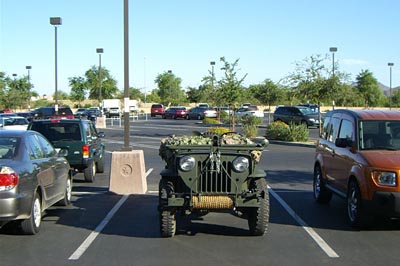 This was one of my first military-style Jeeps, a look I liked and now almost all I build. I love how they stand out in public amongst "normal" cars. Sold this on eBay a few years ago; it now lives in Italy with a collection of very nice military rigs. 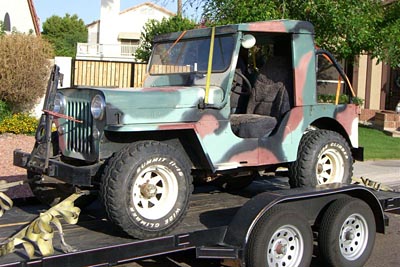 I bought this 1954 CJ-3B just a few days before a camping trip, and wanted to take it with us but man was it ugly! All stock, no rust, cool halfcab, ran and drove really well, but I hated those seats, the paint, etc. 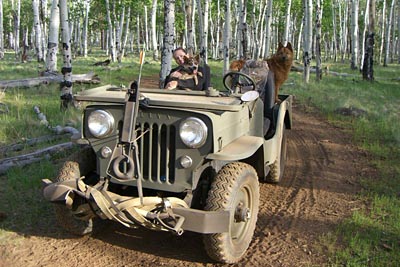 So out came the flat green Krylon for a super-quick coat for the trail. Later ended up selling it just like it was, when a new toy loomed on the horizon, so I never tore this 3B apart to redo it.
I have also done a bunch of low hoods and some M38A1s, civie CJ-5s etc. in the same style. I used to live on the golf course in Glendale AZ; all my neighbors drove little custom golf carts, and we drove whatever flat green machine was in the garage at the time (75K JPEG). Don't know why Im so hooked on that look, but I love the way they look in the woods. The funny thing about camo or flat green paint in the woods is, I have lost a few. Gone hiking, come back at dark and had a hell of time finding the Jeep.

I lived in a full military (NATO camo) 1964 Mercedes Unimog for about a year. This thing was 9 feet tall, weighed 9500 lbs. and I lost that sucker in Utah over and over. One night, came back from a long trout fishing hike, very little moon, was positive it was 150 feet directly in front of me and walked right into the side of it! Turned out it was only about 50 feet in front of me. I was amazed that something that big was hidden right in front of my nose, and gained a lot of respect for flat camo after that. More than that, I like what fun a Willys is, a big life-size toy Jeep, and I know I'm not alone! -- Jim Boswell

Thanks to Jim for the photos. You can contact him at bozwell13@hotmail.com if you're interested in custom seats. -- Derek Redmond

See more military-style restorations in Things Are Not Always What They Seem....

And lots of real CJ-3B and M606 Military Jeeps on CJ3B.info.