You're in the Army Now

Les Davis isn't the first person to turn a civilian CJ-3B into a military Jeep -- it's not uncommon outside North America. But Les has done a pretty convincing job restoring this 1964 high hood as an M606 in Texas. Here's his story of the project. -- Derek Redmond 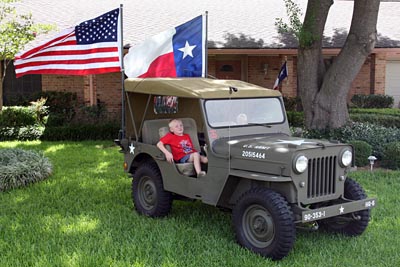 I've always loved old Jeeps, and I decided to find and restore an old Army Jeep. I stumbled onto a straight, clean 1964 CJ-3B during my search, and I found a keeper! This particular Jeep was used on a hunting lease in dry West Texas for many years, so it was in fairly good shape. It needed some TLC, but I felt like I could handle everything it needed. 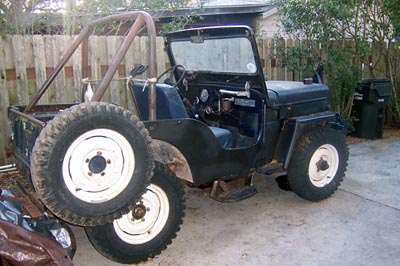 I hauled "Old Blue" home in December 2006 and pushed it into the driveway for what has been an amazing journey. I decided right away to restore this old machine to M606 specs -- or something very close.

I started by replacing the carb and fuel pump so it would run, and spent the next several months cutting away the skid plates, grill guards, gun racks and roll bar (150K JPEG). From there, I rewired it from bumper to bumper and replaced the exhaust, front brake components, tie rod ends, and the steering bellcrank. 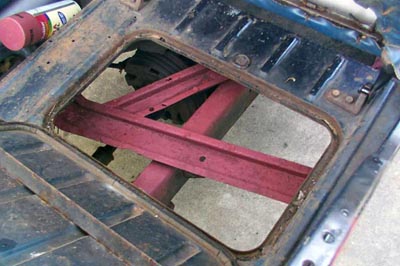 I did some body work (130K JPEG) along the way, but didn't start the major stuff until I was satisfied with the mechanical aspects of the Jeep. I put 7.00x16 NDT tires on and started stripping paint. I only had to do a little body work; mostly in the toolbox and along the adjoining side (100K JPEG). After that, work progressed at a steady pace.

Oddly enough, both fenders rendered a nice surprise. I found OD green under the original blue paint. I can't tell why they were OD green since they seemed to be the original fenders, but I thought it was interesting! 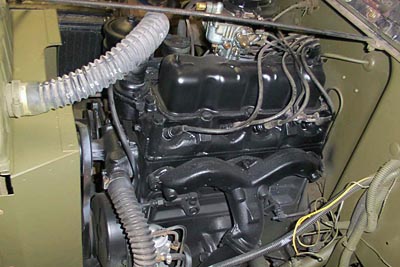 After driving this Jeep around some, I had realized why there was a bag of extra spark plugs in the tool box when I bought it. I replaced the head and regained alot of power and stopped fouling plugs immediately. The whole engine was degreased (170K JPEG) before I painted it black (see also the right side,130K JPEG). 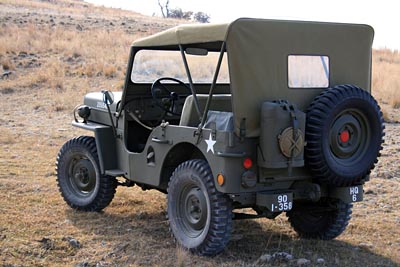 By the end of 2007, "Old Blue" disappeared and my dream Jeep appeared. I added the canvas and bows for an M38 and the unit markings of my father's old Infantry unit. I also added the gas can, moved the spare to the tailgate, added body handles, blackout driving light and military taillights. 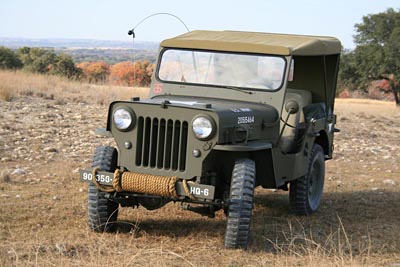 I still have plenty I want to do, but a majority of the work is complete.CJ3B.info has been a tremendous asset to me as I restored my Jeep. I never realized there were so many resources available. Thanks to everyone for sharing their stories and projects!

Thanks to Les for the story and photos. -- Derek Redmond