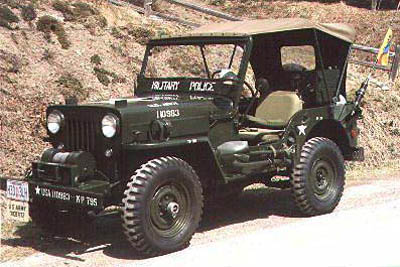 This 1954 CJ-3B, dressed as a U.S. Army Military Police vehicle, was photographed in 1999 by Bernie Kenney of central New York State, who purchased the Jeep in 1993. The authenticity of this restoration is unknown -- I haven't seen any evidence of a CJ-3B in use by the U.S. military with pioneer tools, winch, or folding tilt-style canvas top. 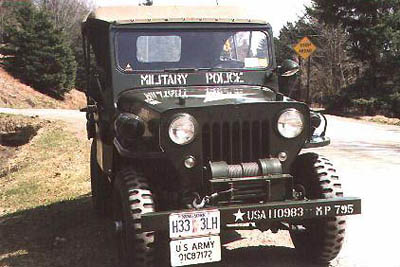 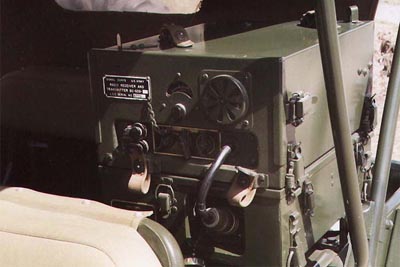 "The radio is supposed to work, however the power pack is empty. The PTO operates when engaged, but the winch doesn't engage. The previous owner advised that the drive chain broke a link and came off the sprockets. I never took it apart to check it, but the PTO does work, so that must be it." 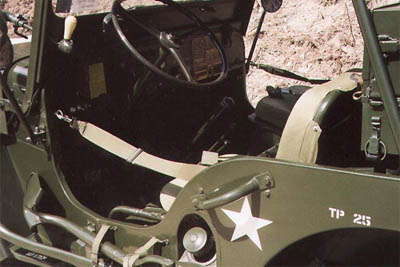 "I've only put about 1,000 miles on it since I purchased it. The pictures were taken in early May this year."

See also a closer photo of the dashboard (40K JPEG). 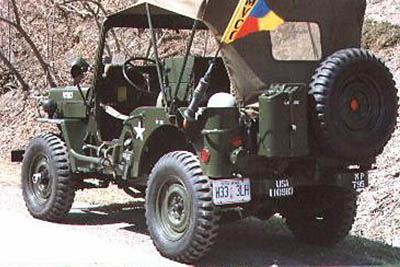 The Jeep has a 6-volt electrical system, a Warn overdrive, and an unusual hydraulic parking brake. Apparently the restoration work was done in California, although Bernie doesn't know who did it.

Also on CJ3B.info, see some other not quite real military CJ-3B restorations.

And see some real CJ-3B and M606 Military Jeeps.