On the Line in Toledo

LIFE at the Parkway Plant

In 1960, when I was eight years old, my family was living in Ankara, the capital of Turkey, and I witnessed, from our apartment balcony, tanks rolling through the streets as a military coup overthrew the government on 27 May. At the time I didn't know the name of the deposed president, and I haven't really thought about him since then.

Until 2011 that is, when Federico Cavedo found some LIFE magazine photos of Turkish President Celal Bayar touring the Willys factory in Toledo, in 1954. And ironically this apparently happy visit to the industrial heartland of the USA is probably one of the things that eventually resulted in his government's overthrow in 1960. 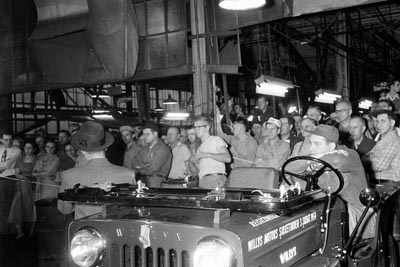 Willys staff had prepared a CJ-3B as a gift to the visiting dignitary, and had lettered the hood (in Turkish) with "President Celal Bayar, Willys Motors Corporation, 3 March 1954." As it happened, the visit took place earlier than 3 March, but perhaps there was no time to change the lettering.

In this photo, apparently taken prior to Bayar's arrival, a gentleman in a fedora, perhaps a Willys exec or a State Department official, seems to be instructing the unenthusiastic employees in how to behave, in anticipation of plenty of press coverage (130K JPEG). 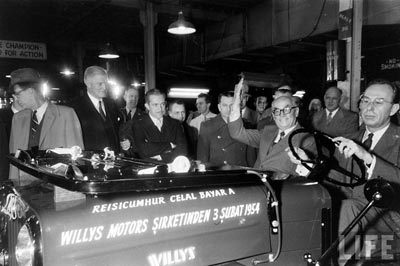 This photo shows the President beaming from the passenger seat as Willys Motors' owner Edgar Kaiser takes the wheel. VIP's in the background include the fellow in the fedora (left). His cheerleading did pay off, as most of the employees seemed to be enjoying the event when they got their chance to be in the background of another shot (150K JPEG).

The shot chosen for the LIFE article (100K JPEG) published on 22 February 1954, made Edgar Kaiser look like a bit of a clown, as LIFE liked to do (see also When the CJ-3B Was New on CJ3B.info.)

See a photo of the President's gift arriving in Turkey, on Tuzla Jeeps in Turkey on CJ3B.info. 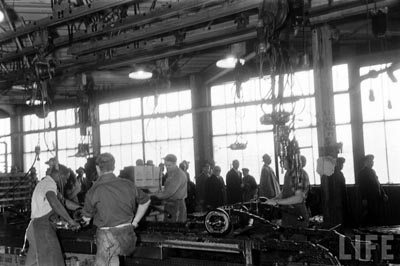 Most of the press corps (and Edgar Kaiser) seem to have departed after the Jeep presentation, but Celal Bayar continued on a tour of the plant. These LIFE photos are credited in the LIFE Archive to "Capa," who is likely not the famous war photographer Robert Capa (who was killed in Vietnam in 1954) but his brother Cornell Capa who worked for years as a LIFE staff photographer.

President Bayar and his entourage walk past in the background of this photo, which looks like it may have been taken in the same spot where Tony Curtis and the Hollywood crew had been photographed a year earlier, during the shooting of Johnny Dark (below). 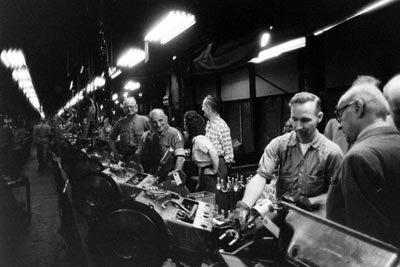 This shot shows pistons going in, on the engine assembly line. Bayar had an interest and enthusiasm for technology, and his purchase of large amounts of modern agricultural equipment for Turkey, helped create a large national debt which was one factor leading to his government's overthrow.

Now I know a bit more about why those tanks were rolling through Ankara on 27 May 1960.

Also on CJ3B.info, see Turkish tanks and Jeeps in the streets of Istanbul earlier in May, 1960.

LIFE in the Press Room 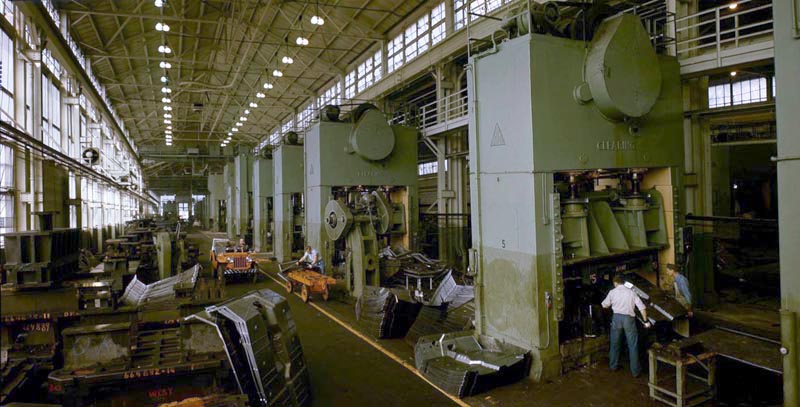 This remarkable picture is a composite by CJ3B.info of two shots taken in the Parkway Plant press room by the famous LIFE magazine photographer Alfred Eisenstadt, who was clearly inspired by the massive space and machines. A Jeep is being used to transport parts, as two employees feed a floor pan into the big 900-ton Clearing sheet metal press. Comparison with another photo (80K JPEG) from Working at the Overland, suggests that the room included at least four additional presses to the right of the press being used above.

The original photos used in the panorama here were found by Luis Mariano Paz in the LIFE Archive. I haven't seen any other photos from Eisenstadt's visit to the plant, and as far as I know this pair is previously unpublished. The exact date is unknown. 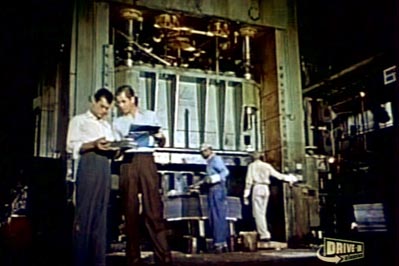 The Clearing presses served as a backdrop in the 1954 movie Johnny Dark, in which the Willys plant represented the "Fielding Motors" factory. Here, Tony Curtis as Johnny and Don Taylor as Duke are seen in one shot from a brief sequence where the prototype of Johnny's sports car design is fabricated. 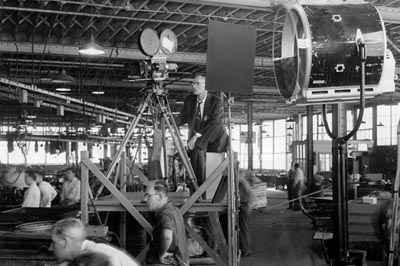 Two photos from the Glenn Brummer collection, courtesy of Forgotten Fiberglass, show the Universal Studios crew on location at the plant in 1953.

This camera setup (right) appears to be for the high-angle shot (50K JPEG) where the sports car body is lifted onto the chassis. The man seated behind the camera here may be cinematographer Carl E. Guthrie, who was to have one other slight connection with Willys a few years later, when he shot an episode of the first season of Maverick in 1957. That series was sponsored by Willys and inspired the Jeep "Maverick Special" Station Wagon. 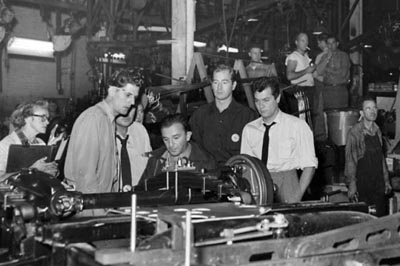 Tony Curtis and the crew, with Willys employees looking on, are seen here planning the sequence where Johnny assembles the car (60K JPEG). There's a microphone boom on a platform in the background, and the script supervisor is on the left.

The short man in the middle is Johnny Dark's director George Sherman, who had a long career in Hollywood directing action films (or "B" movies), and episodes for TV series including Naked City and Route 66. 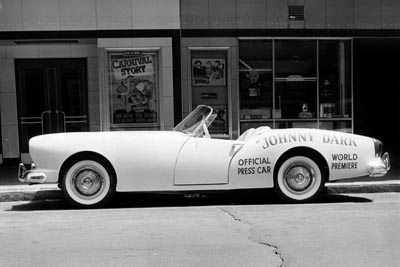 Johnny Dark also featured some Aero-Willys cars, playing the Fielding Motors sedans, and the automotive star of the film was the Woodill Wildfire (60K JPEG), custom-built in California with a number of Willys parts.

Willys Motors' new owner Henry Kaiser probably expected his limited edition Kaiser-Darrin 161 roadster (right) would also be featured in this movie about sports car racing. Despite the fact that it didn't actually appear in the film, a Darrin was painted to advertise the world premiere in Toledo on 16 June 1954 (see the story in Forgotten Fiberglass.)


Home of the World Famous TR-2?

Both Kaiser and Willys cars were built in Toledo alongside Jeeps for a couple of years after the Kaiser merger in 1953. But Bill Munro's book Jeep: From Bantam to Wrangler reveals that if not for that merger with the builder of the Kaiser-Darrin roadster, a deal might soon have been signed between Willys-Overland and the Standard Motor Company of Britain, to build the new Triumph TR-2 sports car in Toledo as the "Willys-Triumph". The CJ-3B and M38A1 would have been built in the UK. (See more details in What Henry Kaiser Gave Up to Make Jeeps on CJ3B.info.) 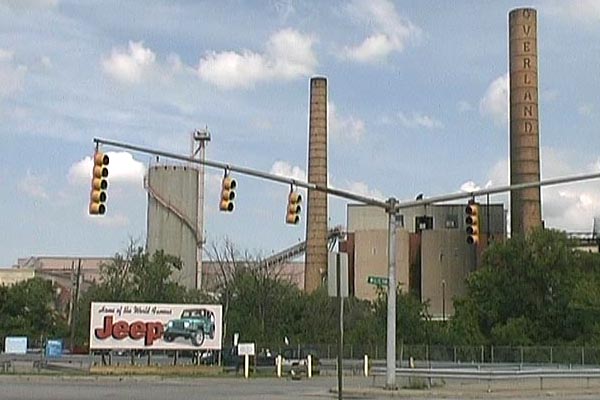 In this 2002 photo, two of the original three smokestacks, shortened slightly, still stand at the Parkway plant, behind the billboard reading "Home of the World Famous Jeep." 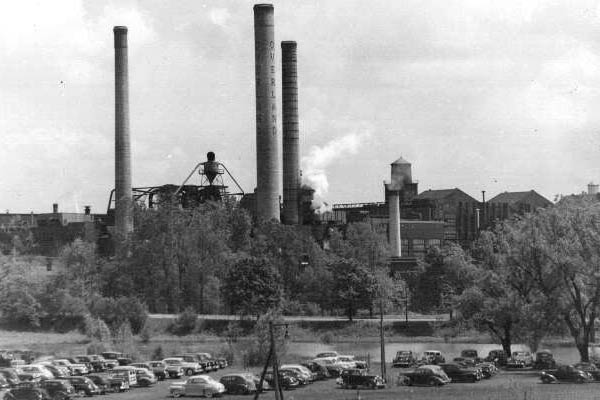 A close look at an older photo suggests it was perhaps taken in the early 1950s, as there appear to be Kaiser and Willys cars from that era, and a Willys Jeep Station Wagon, mixed in with older vehicles. The three smokestacks on the west side of the plant can be seen in the background, across the river from this grassy area south of the main employee parking lot. (Photo from the Images in Time collection at the Toledo Lucas County Public Library.)


As of 2002, Jeep Wranglers were still being partially assembled at the old plant, but its days were numbered (see Willys Factory Demolition.) The new Chrysler Jeep plant is a few miles away.

Thanks to Glenn Brummer, and Geoff Hacker's Forgotten Fiberglass, for the Johnny Dark photos. Also Luis Mariano Paz and Federico Cavedo for searching the LIFE archive at LIFE.com. -- Derek Redmond

See more assembly line photos in Working at the Overland.