Working at the Overland

The Jeep Parkway Plant, known for many years as "The Overland" after its original corporate owner Willys-Overland, was a major employer in Toledo, Ohio. Some 15,000 employees at the plant during WWII built a jeep every 2 minutes, according to Jeep historian Ron Szymanski. The employee parking lot surrounding the Administration Building can be seen filled to overflowing at the very top of this page, in the 1957 background photo.

The exact date of the first photo here is unknown, but it appears to date from shortly after Kaiser Industries' purchase of Willys-Overland in 1953.   CJ-3Bs and military M38A1s are being built on the same assembly line. The carefully set up shot, lit with three large photo lights, was originally published in Willys News. See a large copy (200K JPEG) of the photo, courtesy of Stig Edqvist, author of The Jeep in Sweden. 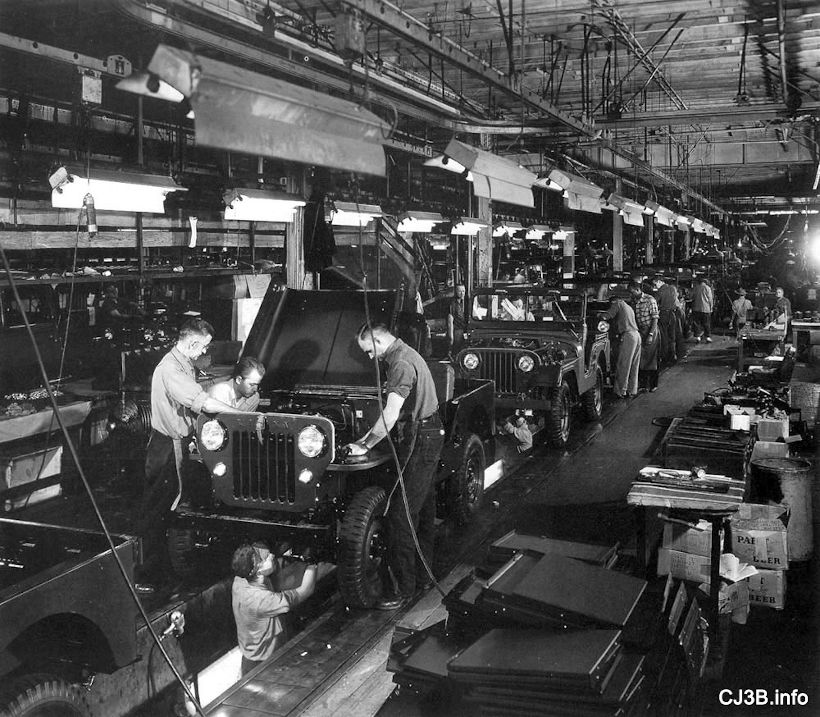 The merger of Kaiser and Willys meant that Kaiser's large Willow Run auto plant was surplus, and since the auto industry was in recession due to the Korean War, the United Auto Workers didn't oppose the transfer of all production to Toledo. In fact the assembly line workers accepted a ten percent pay cut, according to Bill Munro's book Jeep: From Bantam to Wrangler (see the CJ-3B Bookshelf). 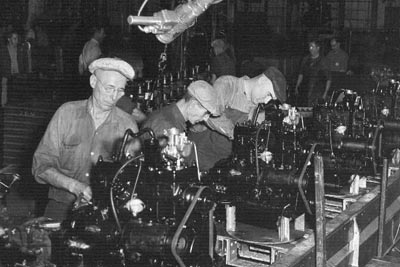 These photos come from the Images in Time collection at the Toledo Lucas County Public Library. The library's database estimates the date of this photo by Neil T. Regan as 1959, but given the clothes worn by these employees, and the fact that they are preparing Go-Devil engines, I would guess 1949 might be closer. 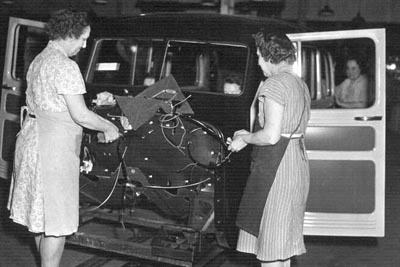 Substantial numbers of women began working at the plant during World War II, and this photo, also by Neil T. Regan, shows that they didn't all pick up their lunchboxes and go home at the end of the war. The date here is estimated as 1950, which seems quite possible. 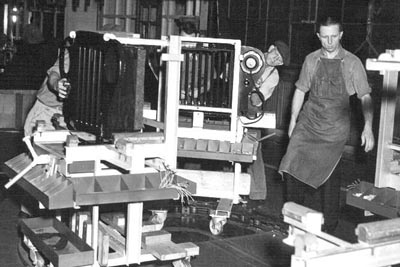 Some hard evidence, in the form of these flat radiator guards for station wagons or pickups, places this photo as prior to April 1950 when the grilles were changed to the forward-pointed design seen in the next photo below.

Custom workbenches on tracks carry the grilles around a U-turn in the assembly line here, as the front lights are installed and wired. 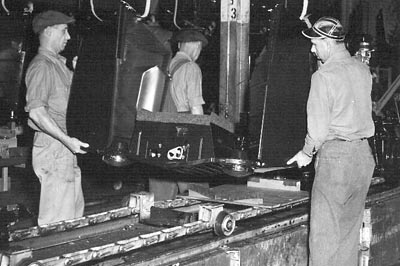 It's interesting to see the various methods and machinery used to move components along the line. 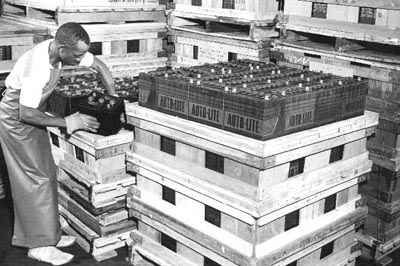 This worker wears protective clothing for handling lead-acid batteries. The fact that both 6-volt and 12-volt batteries are on hand, suggests this photo may date from the early 1950s.

See also tires in stock at the factory, dated as circa 1959. 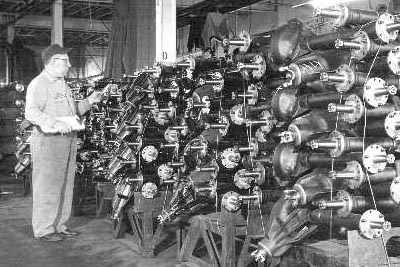 Whoever loaded these axles for their trip over to the Overland from the Dana plant, knew what they were doing. But the Willys foreman is checking to make sure everything is as ordered. 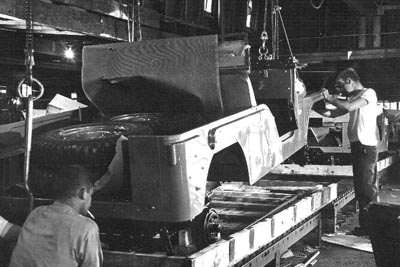 This is clearly from late 1955 or after, since the body being lowered onto its frame is a CJ-6 model. The photo was taken by Norman C. Hauger who also shot the background photo on this page, a 1957 aerial view of the factory (see The Parkway Plant From the Air).

We do know the exact day these pictures were taken. Bill Norris found a Willys-Overland publication entitled A Day in Review: October 6, 1948, Industrial Day in the Detroit public library. The booklet gives a tour of the factory on a typical day, and includes these photos of Jeep production: 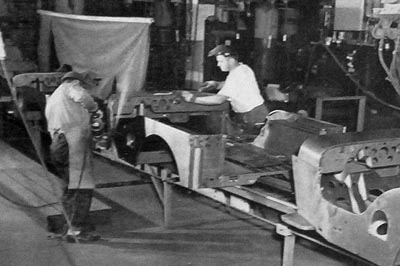 "Drilling oil holes in crankshaft with a six-spindle special drill (60K JPEG). Several million dollars worth of new tools and machinery to do jobs like this and many others have reduced costs and improved efficiency and quality of Willys products." 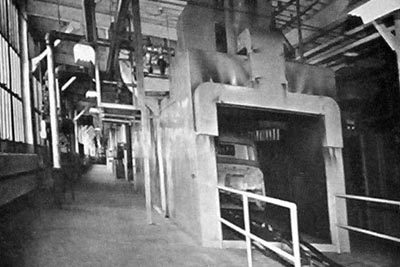 "Installation of new paint drying ovens since the war provides accurately controlled temperatures, thus improving the quality and durability of paint finishes on all Willys-Overland products."

"Stamping station wagon fenders out of sheet steel. This is one of 63 huge presses (60K JPEG) installed since the war in the Willys-Overland factory to make body-building an integral part of the manufacturing operations."

The number of employees at the Parkway Plant decreased gradually as automation increased efficiency. By the 1960s approximately 5500 employees built a Jeep every minute. The workforce had been reduced to about 3600 people by 2001, but they produced Jeeps at about the same rate due to out-sourcing of components.

Thanks to Stig Edqvist, Roger Bensgård and Bart McNeil for assistance in reproducing the CJ-3B photo, Bill Norris for the 1948 photos, and the Images in Time collection at the Toledo Lucas County Public Library. -- Derek Redmond