History of Willys Jeeps in Turkey

The first automobile manufactured in Turkey was a Jeep, in 1955. That might say something about the mountainous terrain of the country which includes Mount Ararat, where Noah's Ark is thought to have landed. (Actually, according to Turkish Automotive History, there was a Ford initiative in the early 1930's which produced cars in Turkey briefly.) 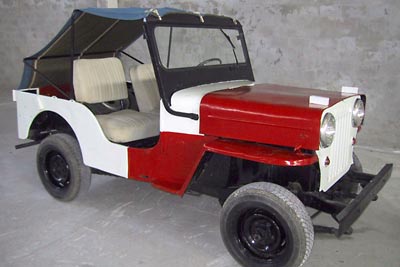 In 2004 the Rahmi M Koç Museum in Istanbul acquired what is reportedly that first truly Turkish-manufactured vehicle, from 1955: the first CJ-3B off the line made with entirely Turkish components, with the possible exception of the engine.

Donated by the widow of Ferruh Verdi, the owner of Türk Willys Overland from 1953-1972, the Jeep was retained by Mr. Verdi for his personal use and given the name "Ayse" (a popular girl's name in Turkey). See also its Hurricane engine (90K JPEG).

Tony Phillipson, General Manager of the Museum, comments, "It is in running condition, although the general workmanship is rudimentary compared to the later car in our collection (see Restored Tuzla Jeep). The wheels were apparently changed from 15" to 14" a few years ago by Mr Verdi in an attempt to lower the centre of gravity." 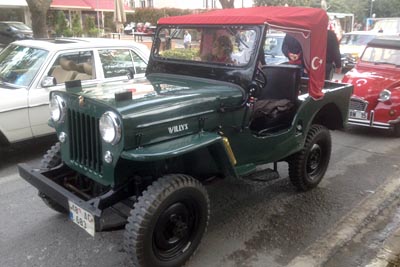 Some Willys Jeeps were apparently imported as early as the late 1940s. Sinan Nasirli owns what was probably one of the first CJ-3Bs in Turkey. Following a restoration which included returning the 1953 Willys to its original length after an earlier wheelbase stretch, Sinan added a Turkish flag soft top. 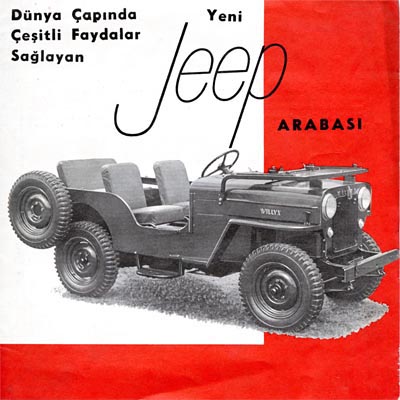 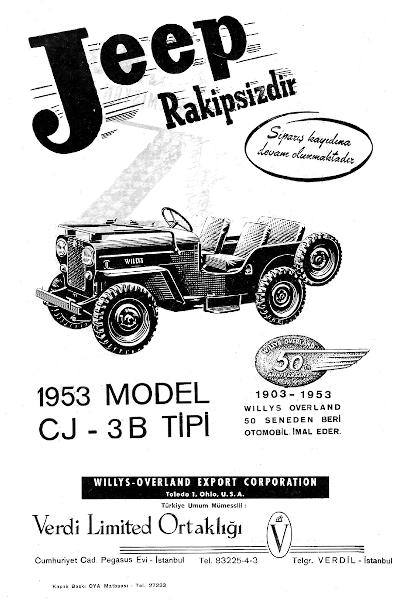 Here's a small mystery: this ad for the new CJ-3B featured an ink drawing based on the photo from the brochure, but flipped so that it became right-hand-drive, with a lefty spare tire. The artist redid the WILLYS lettering so it's the right way around. Possibly Willys-Overland Export had the drawing done for potential use in RHD markets, but why did Verdi choose to use it in Turkey, which was not RHD? Maybe just a mistake.

The windshield-down photo was popular in overseas marketing, but it was seldom if ever used in Willys advertising in the U.S. It emphasizes the high hood, giving it the look of a powerful vehicle, but Willys was apparently nervous about how the high hood would be received in the domestic market where the lower hood of the earlier flatfenders was well established.

The ad is headlined "Jeep Unrivaled" and introduces the "1953 Model, CJ-3B Type." It includes Willys-Overland's 50th anniversary logo (10K GIF). Thanks to Jan Hogendoorn for scanning it. 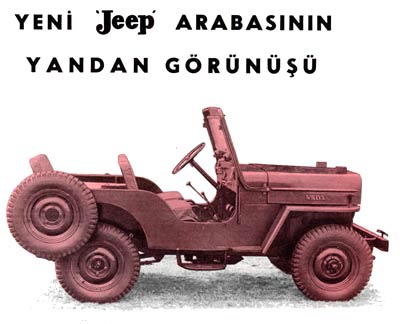 This illustration from the brochure is captioned "New Jeep Car: Side View," which perhaps doesn't really catch the flavor of the caption in the English version of the brochure, which was "A New Profile," drawing attention to the higher hood and bigger engine.

The brochure also includes a cutaway illustration of the Hurricane engine (80K JPEG). See the full interior of the unfolded brochure (400K JPEG). Thanks to Serhat Güvenç for scanning this publication. 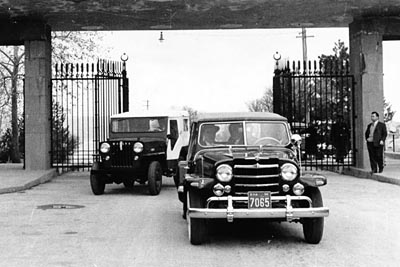 In February 1954 the President of Turkey visited the Willys factory in Toledo and was presented with a CJ-3B Jeep. This photo shows what may be the President's gift, arriving at the Presidential Palace in Ankara. The lettering painted at the factory has been washed off the hood, and the Jeep is being escorted by a Jeepster with an Ankara license plate. Possibly the President is inside.) 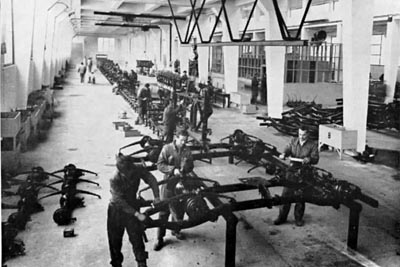 An article in the New York Times on 23 April 1955 (70K JPEG) stated that construction was underway on a plant near Istanbul to build Jeeps for Turkey and the Middle East. The Türk Willys Overland Ltd. assembly plant was located on a 33 hectare (80 acre) site in Tuzla, just south of Istanbul (see a map of Turkey, 270K JPEG).

According to research by Tony Phillipson, "By 1961 the plant had four assembly lines and 782 employees, and was producing some 5,000 trucks and 7,200 light vehicles (especially 1/4 ton Jeeps) annually." 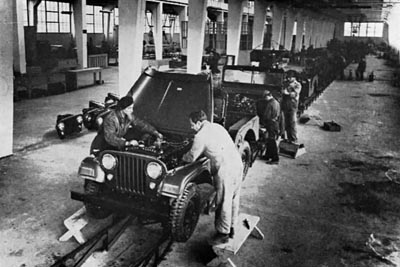 A 1960 publication (60K JPEG) promoting the Tuzla plant includes a photo of an architect's model showing projected plant development (70K JPEG). The text states that Willys pickups and panel trucks are to be added to the Türk Willys Overland line in 1960. 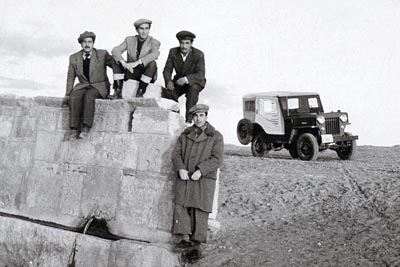 Serhat Güvenç uncovered this great photo which demonstrates the affection felt for Jeeps in Turkey. He identifies this as having been taken sometime prior to 1962, the last year this type of registration plate (bearing the name of the issuing province) was issued. Unfortunately the name of the province is not legible. The Jeep appears almost brand new, and the photo of four friends posing on a stone fountain is wonderful -- one of those pictures which make you wonder about the story behind it.

Owner's manuals for both the CJ-3B and a 1948 CJ-2A have turned up in used book sales. The existence of the CJ-2A manual (see the title page, 90K JPEG) suggests that Jeeps were imported for some years before the domestic assembly plant was built.

The CJ-3B "Use and Care Book" is for a "Model CJ-3B, military type, 12 volt, radio supression equipped." From photocopies of the manual, see a page identifying the parts of the interior (140K JPEG), and a page listing the basic CJ-3B specs in Turkish (60K GIF). Some of the specs seem to be slightly different from those given in Willys publications; probably differences in how they were measured.

Sinan Nasirli found a 250-page manual for "Use, Maintenance, Troubleshooting, and Repair" of the Jeep, Pickup and Station Wagon. It dates from 1960 and is the second edition. It includes a handy Model Years chart (225K JPEG) showing all Willys models from 1945 to 1956, and a page describing the Hurricane motor (180K JPEG).

Parts source in Turkey: Ulus Automotive in Istanbul has been a supplier of Jeep and Willys parts since 1978.

Thanks to Serhat Güvenç, and Tony Phillipson and his staff at the Rahmi M Koç Museum. -- Derek Redmond