Jeeps used in law enforcement are not as common as the number of Police Service Jeep Toys might suggest. Most police departments are more concerned with having vehicles that are comfortable, and capable of chasing a fugitive at speed on streets and highways, than with dependability in varied weather and topography. But there have been some interesting examples. 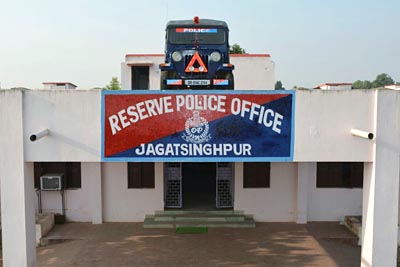 Jeeps were used widely in police work in India, and that long service was recognized in December 2017 when a restored patrol Jeep was lifted onto the roof of the Odisha Reserve Police Force building in Jagatsinghpur, India.

"We have stopped using typical Indian police Jeeps suited for rough roads and steep inclines. SUVs have taken their place. But we grew up watching this vehicle. We are perhaps the last generation to have used the Jeep. So we decided to keep one old Jeep as a mark of respect atop the building," said Superintendent of Police Jai Narayan Pankaj, to The Hindu newspaper. 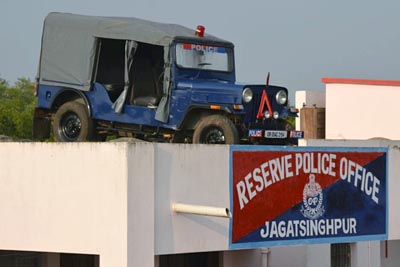 The long-wheelbase Mahindra Jeep on the roof also lights up at night (60K JPEG). Thanks to Jim Gregor for spotting this news item. See also an article in the Times of India about the disappearance of police Jeeps in the state of Uttar Pradesh.

Not only were Jeeps used by police forces across India, but they were also very popular in Bollywood films. See some Mahindra police Jeeps in the Movies on CJ3B.info. 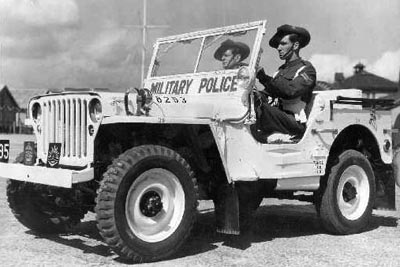 Military Police have of course often used Jeeps. This example was seen in a history of the Australian Military Police Corps, whose motto through the World Wars, Korea, Vietnam and other UN and peacekeeping operations has been, "For the Troops and With the Troops." This Willys MB was part of the the post-WW II BCOF (British Commonwealth Occupation Forces) in Japan. 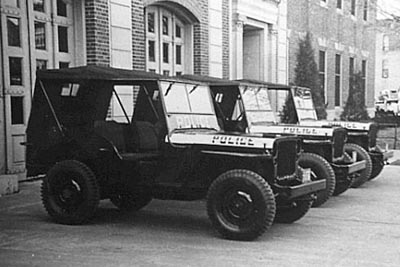 This photo of several Jeeps in service in 1946 is from the Lincoln, Nebraska Police Department whose website has stated they were "used mostly by motorcycle officers during inclement weather" and listed the cost to the department as $2250, although that seems high for the 1940's. And these Jeeps appear to be surplus wartime MB's, which would have been available very cheaply to local government agencies, although this was more common in Europe than in North America. It would be interesting to hear the whole story of these units. 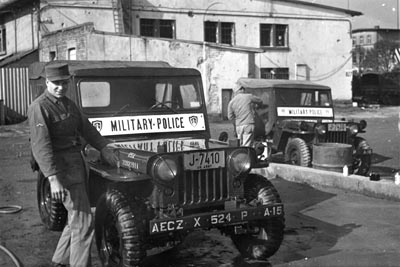 The Willys MC replaced the MB as the U.S. military Jeep in 1950. Designated M38 by the Army, it was a slightly beefier version of the civilian CJ-3A. This undated, unidentified photo shows a couple of the new Jeeps with an MP unit.

Mark Randall has identified both the bumper lettering and the insignia as indicating US Army Europe Communications Zone, as well as pointing out that the Ridgeway cap dates the photo to post-Korea. 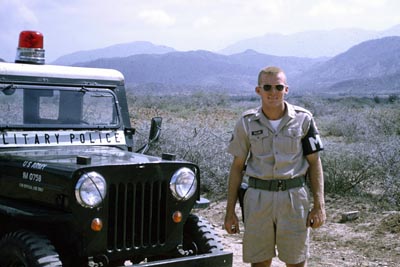 Military Police service was one of the non-combat roles sometimes delegated to less-expensive civilian Jeep models such as the CJ-3B. See more details on this U.S. Army MP Jeep photographed in Ethiopia in 1965. 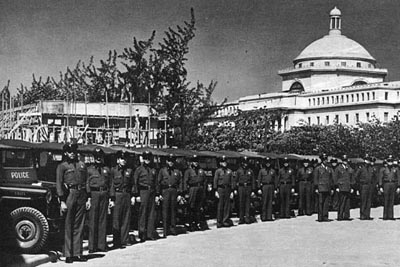 It didn't take Willys Motors long to start seeing overseas police departments as a profitable market. One of several police photos in their late-1950s booklet Jeep Family of 4-Wheel-Drive Vehicles in Public Service shows a parade of police officers and their Jeeps in San Juan, Puerto Rico. 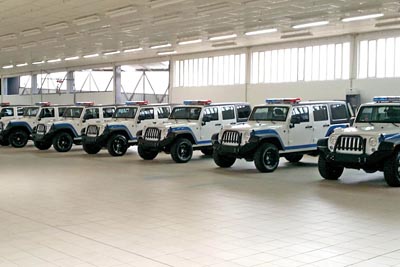 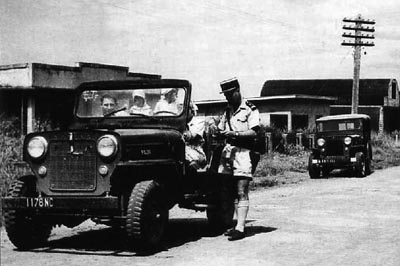 The traffic stop in the photo apparently took place, or was staged, in the 1960s in Madagascar, off the east coast of Africa. The French Gendarmerie Nationale (National Police) were responsible for colonial law enforcement, and many of their Jeeps were built by Hotchkiss in France although these two look like Willys. 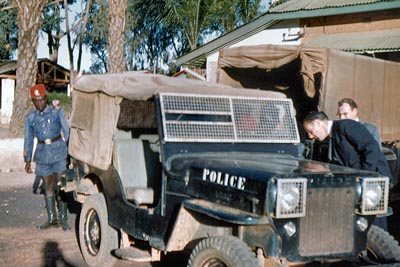 Another Willys CJ-3B in Africa with a chaff screen, and this one also has some anti-riot protection for the windshield and headlights. It was photographed in Elisabethville in the Democratic Republic of Congo in 1960. Photo from Jeeps in the Congo on CJ3B.info, © MAES/ www.cegesoma.be. 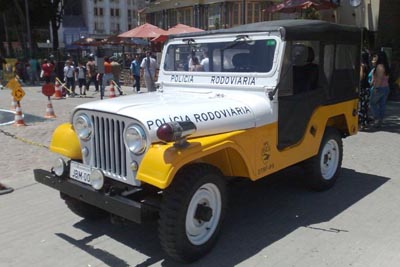 This Brazilian CJ-5 with its distinctive rear wheel openings (see Jeeps in Brasil) served with the Policia Rodoviária (Highway Patrol) operated by the roads department in the state of Rio Grande do Sul in the 1950s and 60s. In 1967 the role of policing highways was transferred to the military. 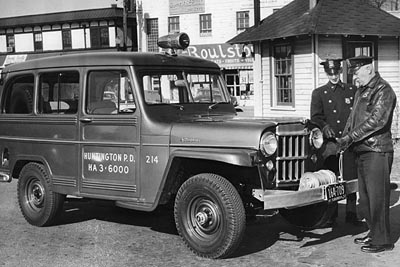 Huntington, New York is on the north shore of Long Island, and in 1957 the town selected a Willys Station Wagon to cover beach patrol and snow duty. Patrolmen in this photo are Paul Arato and Edward Donahue. Photo by Walter del Toro courtesy of vintagenewsday. 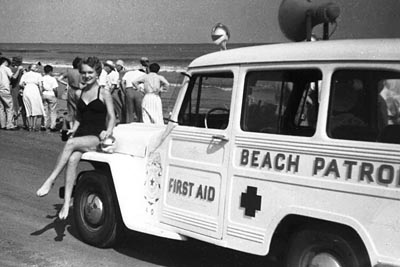 Galveston, Texas Police had apparently already had a Station Wagon for their Beach Patrol for a few years. This photo is circa 1950, source unknown. 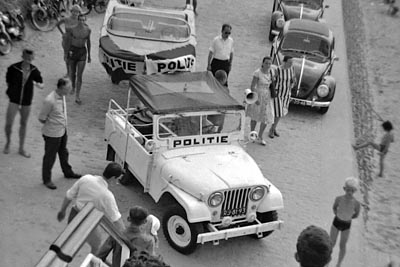 The story of the Police Jeeps of The Hague in the Netherlands is a long one, starting with surplus MB's in 1946 and continuing until 2016. Their Jeeps were typically modified with unique vertical sliding doors, and came with factory black paint and red wheels (460K JPEG). 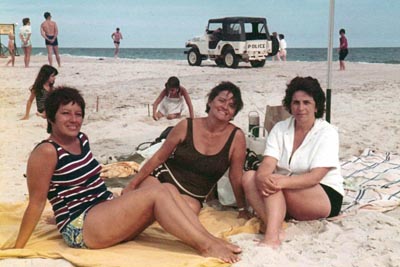 Another beach patrol Jeep, probably in North America. I'm looking for help in identifying the likely date and location of this photo of the CJ-5 with the missing taillight (220K JPEG). The folding vinyl top replaced the earlier canvas top as a standard accessory at Jeep dealers in 1962. 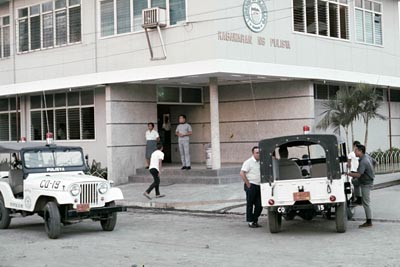 These CJ-5s with canvas tops are outside Pulisya headquarters in Olangapo City, Philippines in 1968. Like the Dutch CJ-5 above, they have the two-pane export windshield. Photo courtesy m20wc51 on Flickr.

See also the Filipino Pulisya in action in the movies: Jeeps and Chains on CJ3B.info. 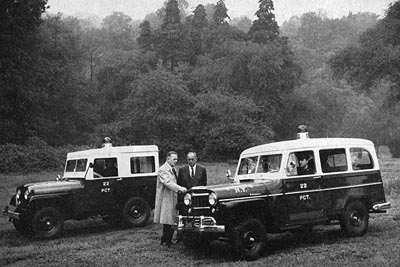 A couple of small photos of the CJ-5 on patrol (40K JPEG) are courtesy of PoliceNY.com. 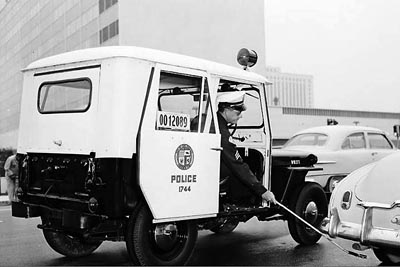 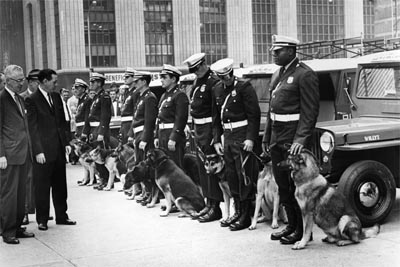 The Philadelphia Police purchased a variety of Jeep vehicles over the years, notably a number of Dispatchers. The DJ's appeal was not its offroad capability, but its low cost as a fleet vehicle with easy access, and room in the back for equipment (or canines.) Here the K9 unit and their DJ's are being inspected by the Mayor and Police Commissioner on 2 October 1962. 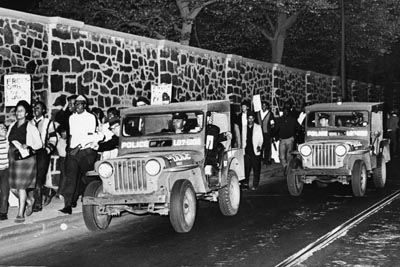 Some of the Philadelphia Dispatchers were outfitted with steel half cabs, so their primary purpose may have been as service vehicles, but in this photo taken on 7 May 1965 they are being used by officers patrolling a desegregation march at Girard College. 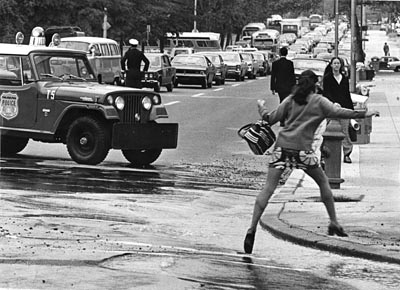 It's unfortunate these photos are black & white, because Philadelphia Police vehicles were painted red and white at this time. They switched to a light blue and white in 1972. 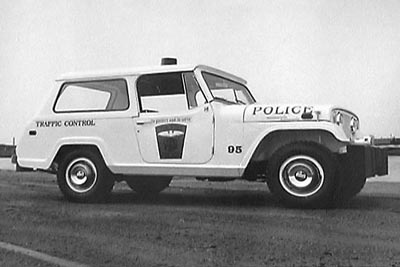 Once again, traffic control was the function of this Jeepster Commando Station Wagon, seen in what is probably a Kaiser Jeep promotional photo, from Arch Brown's book Jeep: The Unstoppable Legend. This one belonged to the Toledo Police, so it may have been a freebie from Kaiser Jeep. 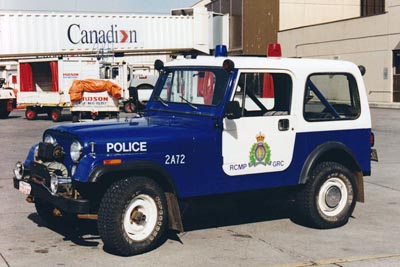 There are also places where effective policing requires vehicles that can deal with extreme geography and weather. This Jeep CJ-7 was used by the Royal Canadian Mounted Police in Fort McMurray, Alberta, and later transferred to duty patrolling the perimeter fence at the Calgary airport, where it was photographed by Doug Morris in 1991. 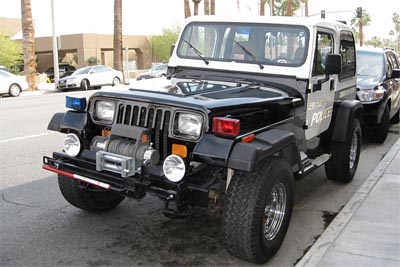 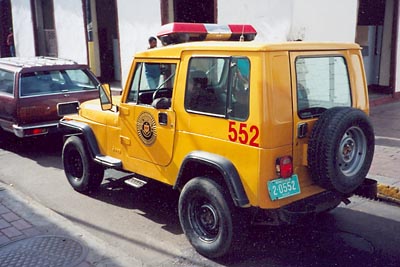 A great configuration for police use is this steel hardtoop YJ with swinging rear door, belonging to the state police in Barcelona, Venezuela, and photographed for CJ3B.info in 1997. 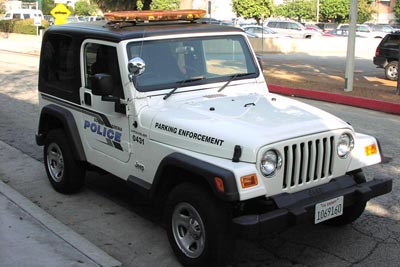 The availabilty of right-hand-drive (70K JPEG) made TJ Wranglers attractive for use in Parking Enforcement. RHD has long been an important option for the marketing of Jeeps overseas and for postal delivery; and officers iin this this RHD Wrangler in South Pasadena CA can also just reach out the driver's window to slap that ticket on a windshield. 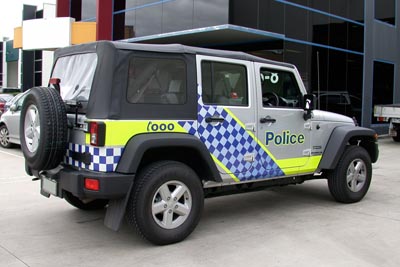 Victoria Police in Australia had acquired a Wrangler Unlimited Sport powered by the 2.8L turbodiesel in 2007. Surprisingly it had a soft top, although it was particularly tasked with winter patrol. See also a front view (230K JPEG). 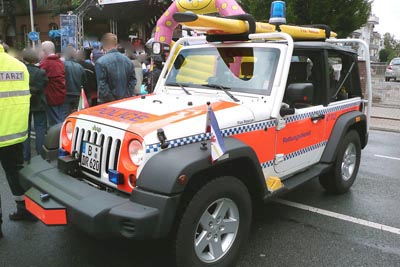 As of 2016, many more departments have adopted the current Wrangler, which offers size and comfort along with its go-anywhere capability and flexibility of configuration. This beach rescue demonstrator in Germany was photographed in use by the Lower Saxony State Police.

Thanks to Mike Albright and Roberto Flores for finding photos, and to the photographers. -- Derek Redmond

See photos of the US Border Patrol, Patrolling the Border by Jeep.