Patrolling the Border
by Jeep

The United States Border Patrol (USBP) is a federal law enforcement agency, within U.S. Customs and Border Protection. Its mission is to detect and prevent illegal aliens from entering the United States, and prevent illegal trafficking of people and contraband. With over 21,000 agents, the USBP is one of the largest law enforcement agencies in the country. It operates over 10,000 SUV's and pickup trucks, as well as some 2,000 sedans. The Border Patrol also operates all-terrain vehicles, motorcycles, snowmobiles, small boats and aircraft. (1) 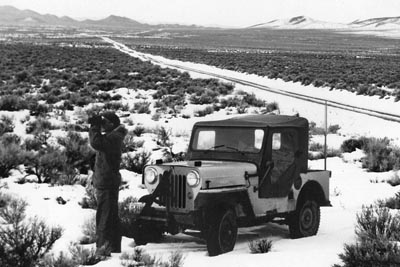 Many of those SUV's are Jeep vehicles, and at one time, many of the Jeeps were CJ-3Bs. One of them is seen here with a Patrol Inspector in 1955 along the Canadian border. The USBP emblem, as seen in the center of the flag at the top of the page, is on the rear side panel of the Jeep. (2) 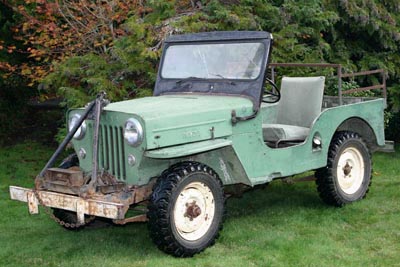 This 1957 CJ-3B was sold as surplus around 1970. It was later repainted red and ironically taken across the border into Canada, where it now belongs to John Howcroft in British Columbia (see 1957 CJ-3B Owners and Photos). 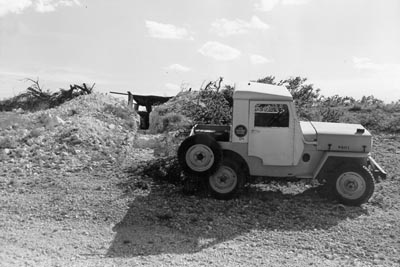 Under the hot Texas sun near the Rio Grande River on 29 June 1961, this patrol Jeep surprsingly has a halfcab hardtop, rather than the canvas top seen above in the snows of Nevada.

In the book Desert Duty: On the Line with the U.S. Border Patrol, one USBP agent comments, "I remember the old Jeeps. We have a photo with the canvas bags that they would drape over the front radiator to evaporate and help cool the radiator system, and also to have potable water available, if they needed it, while running the dunes." (4) 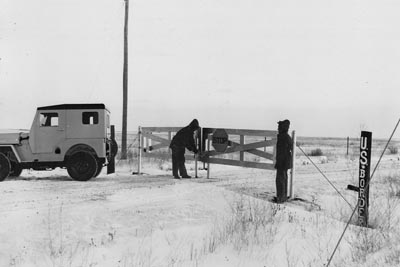 Another CJ-3B photographed at Wild Horse, Alberta in the 1950s, has a cozy full hardtop apparently painted in the same light green as the Jeep, but it doesn't carry the USBP logo. (2)

These archival photos are courtesy of the National Border Patrol Museum in El Paso, Texas. The Museum opened its doors to the public in 1985, and its new building was completed in 1994. It does not rely on government funds for its operations and does not charge any admission fee, but gratefully receives private donations. 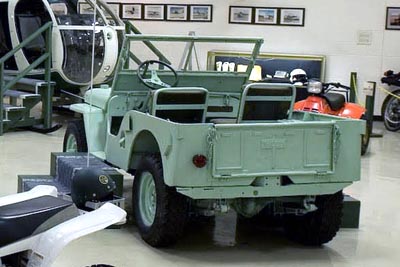 This CJ-2A is on display in the Museum, along with a number of other vehicles (see the large version of the photo, 210K JPEG.)(5) It has a fresh coat of green paint (including a few things that shouldn't have been painted), and a USBP logo as seen in a 2011 photo (130K JPEG). (6)

Surviving black & white photos show that USBP CJ-2As were originally painted in what appears to be a darker green, but may have been repainted when the lighter color was standardized in the early 1950s. 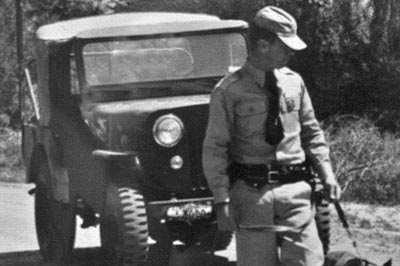 A CJ-3B is seen in this photo in the darker green, which would place the date of introduction of the new paint scheme as after 1952 (when the 3B was introduced.)

Thanks to Dave Eilers who snapped this one during his visit to the Museum, as reported at eWillys. 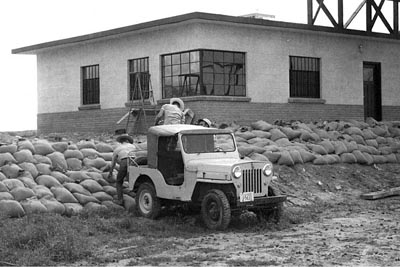 By 1955 this CJ-3B is in light green, and is seen carrying sandbags during flooding preparations at the Presidio, Texas Point of Entry. (7) 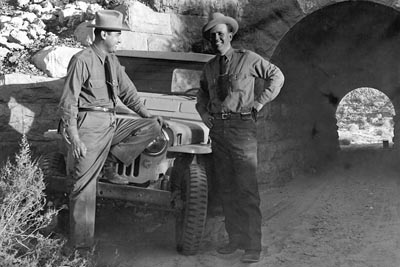 This photo showing Patrol Inspectors with a CJ-3A at Anapra in the El Paso District, is dated 1951, so apparently the new paint scheme was already being introduced by then. (7) 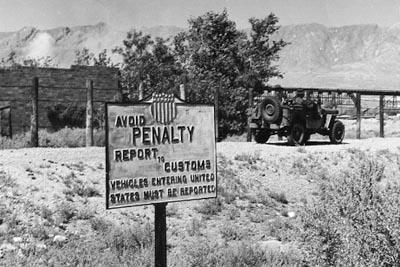 Even as early as 1946, the Border Patrol was using MB's, which were probably war surplus, and presumably still in olive drab. This photo again shows the Mexican border at Anapra, in 1946. (2) 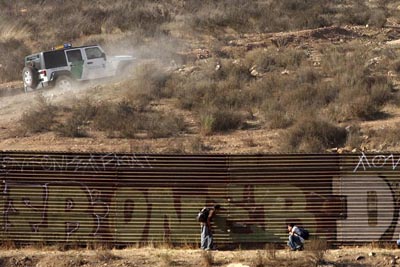 Sixty-three years later, the scene on the outskirts of Tijuana is the same. People on the Mexican side of the border hide from a passing USBP Jeep as they wait to try to scale the border fence. The photo taken on 19 September 2009 by Jorge Duenes for Reuters, is from the photo essay On the Border, in The Atlantic magazine. (8)

As of 2015, photos seem to indicate the USBP maintains a substantial number of Rubicon Unlimited Wranglers. Since the mid-1980's, Border Patrol vehicles have been painted white with a green stripe. (9) 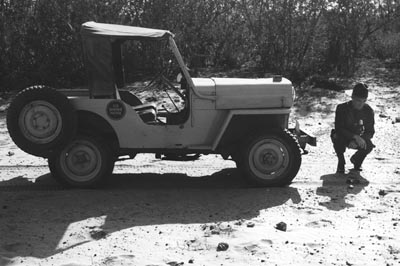 Despite the installation of steel and concrete fences, infrared cameras, sensors and drones along the Mexican border, Patrol Inspectors have always had to keep their eyes open for footprints in the dust. This agent and his CJ-3B were photographed near Del Rio, Texas on 9 March 1956. (2) 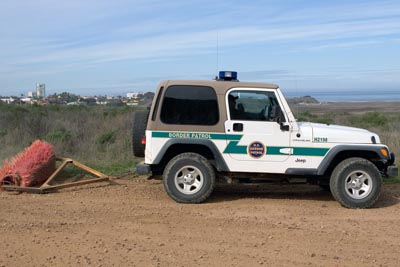 Almost exactly fifty years after the photo above, on 5 April 2006, a TJ Wrangler is dragging the dirt along the San Diego, California side of the border with Tijuana, to make it easier to spot footprints later. This earlier version of the white and green paint scheme had a narrower, horizontal stripe. (10) 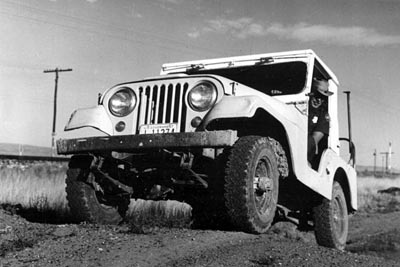 The skill of interpreting and following footprints is known in the USBP as "sign cutting," since it involves anticipating and cutting ahead. An experienced agent can do it from a Jeep, as shown here in a CJ-5 at Valentine TX in the Marfa sector in 1970.(7) 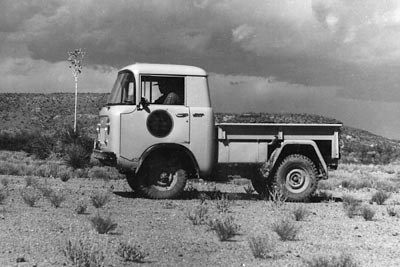 It's a surprise that the USBP also ran FC-150 trucks, as seen here driven by P.I. Buck Newsome near Marfa in 1957. Another surprise is that this Forward Control has the rare budget-model "Standard" cab, with no rear side windows, since you would think an agent in the field would want as much visibility as possible.(7) 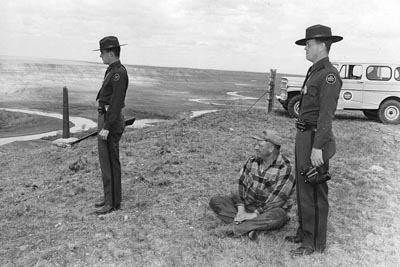 Patrol Inspectors Charles Floyd, Jeff Fell and Kermit Olson, in the Havre Sector of Montana in 1962, have a Parkway Conversion (130K JPEG), another budget vehicle favored by the government, with windows cut into the side of a panel delivery wagon. (7) 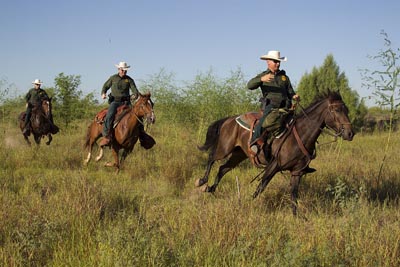 Of course there are sections of the border where even Jeeps would have difficulty gaining access or conducting pursuits, and the USBP still maintains a number of horse patrols. The McAllen Horse Patrol Unit in Texas is seen here in a photo by Donna Burton. (11) 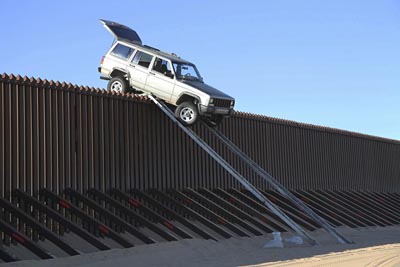 The people matching wits with the Border Patrol are also known to use Jeeps once in a while. In this photo, a Cherokee that suspected smugglers were attempting to drive over a 14-foot US-Mexico border fence, is high-centered at the top of a makeshift ramp, on 31 October 2012 near Yuma, Arizona. Two suspects fled into Mexico when USBP agents arrived at the scene. See also a wider view of the scene. (11) 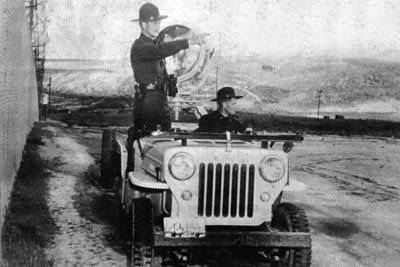 Here's a pretty interesting photo found by Federico Cavedo -- date and location unknown. A CJ-3B, apparently in USBP light green, has a large searchlight mounted in the back, and stands next to what appears to be a border fence. 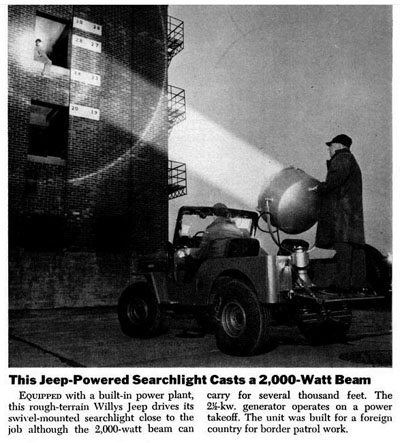 The Jeep-mounted searchlight above is very similar to this one seen in the July 1956 Popular Science magazine! The caption says it was "built for a foreign country for border patrol work." It also says the 2500-watt generator is PTO-powered.

Thanks to Federico Cavedo, the National Border Patrol Museum, and all the photographers. Details on sources are in the footnotes below. -- Derek Redmond