On the Trail of Jeep History

All we had was a long weekend, but my wife agreed to accompany me on a pilgrimage through Jeep history on Father's Day weekend 2000. We drove down from Canada and followed the route taken by auto designer Karl Probst in the summer of 1940. He drove his 1938 Buick from his home in Detroit, to Toledo, Ohio and then to Butler, Pennsylvania, after accepting a contract from the American Bantam Car Company in Butler. He was going to help them build the first prototype 1/4-ton 4-wheel-drive Light Reconnaisance Car for the U.S. Army, which was then delivered to Camp Holabird, Maryland. Here are some photos from the trip. -- Derek Redmond 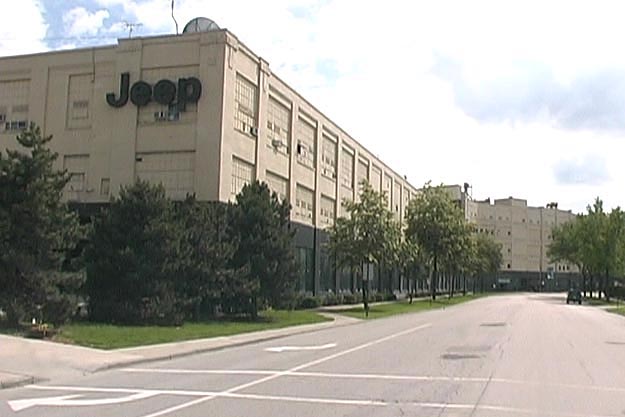 After spending most of our visit to Detroit listening to Motown tunes on the radio while sitting in a traffic jam on the freeway, rather than checking out the Chrysler museum in Auburn Hills as we had planned, we made it down to Toledo by mid-afternoon on Saturday, and pulled off I-75 onto Willys Parkway. There it was -- the old Willys-Overland plant where cars were being built when Karl Probst passed through town in 1940, and where most of the Jeeps built in North America since 1941 have been designed and assembled.

This view is near the south end, showing the "Home of the World Famous Jeep" billboard, and the "Overland" smokestack.

As of early 2002, most of the buildings seen here have been demolished, but the smokestack has been preserved. See Willys Factory Demolition on CJ3B.info for the story of the gradual disappearance of the plant. 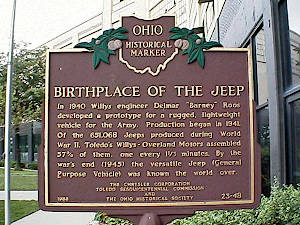 A historical plaque (80K JPEG) in front of the factory emphasizes Willys' role in the original development of the jeep, and the reverse side summarizes the history of Willys. 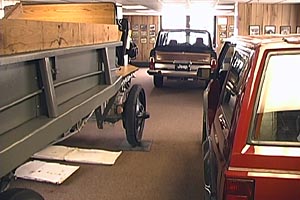 Immediately inside Gate 1 is a small brick building known as the Jeep House (20K JPEG), which houses a unique collection of photos and memorabilia, and the handful of vehicles seen here, including a restored Grand Wagoneer (50K JPEG), an early Nash Quad four-wheel-drive/steer truck, and an auto show Cherokee with the body cut away to display the drivetrain. 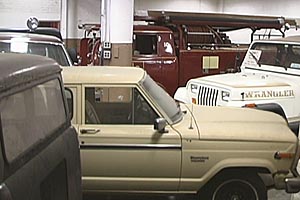 In an adjacent building (where for many years all the experimental Jeep vehicles were built), is a collection of about ten more vehicles awaiting possible future restoration and display. Among the gems stored here are the last CJ-7 off the line (80K JPEG), the first Wrangler prototype, two retired racing trucks, and two fire engines. Chrysler has been providing the space for this collection, but provides little other support for the project, and unfortunately the Jeep House is not open to the public. 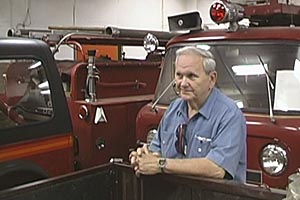 Retired Jeep employee Ron Szymanski is the curator of the Jeep House collection, and has managed to assemble these vehicles as a labor of love over the past ten years. He's seen here in front of the Forward Control fire engine formerly used at the once-huge Libby glass factory in Toledo.

See also more photos of the Gladiator fire truck in the background. 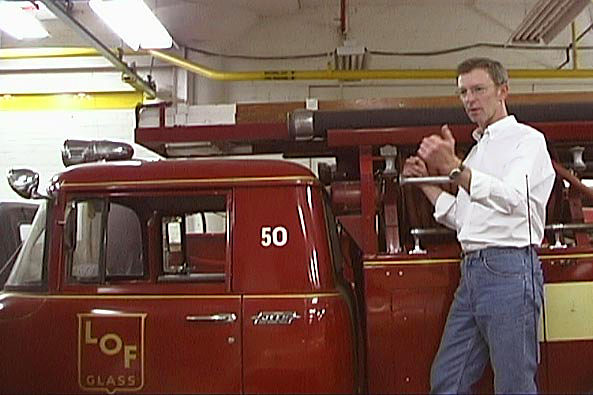 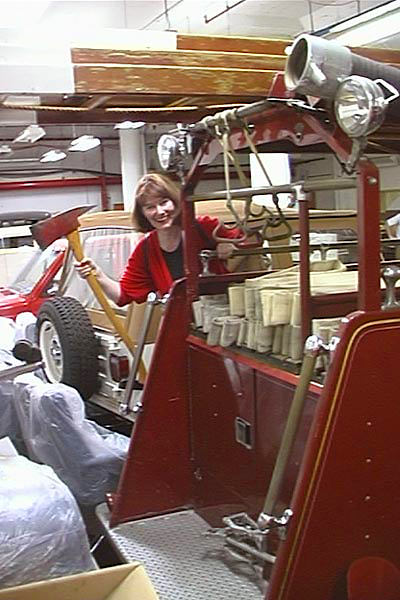 Since this trip was part of our vacation in 2000, I thought I'd include photos here of me and my wife Roseanna checking out the FC-170. 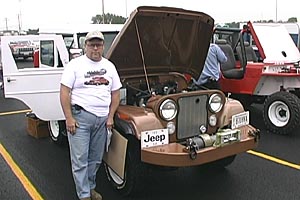 Sunday morning Jarek Skonieczny and I headed out to the new Daimler-Chrysler Jeep plant under construction a few miles east on I-75, for the annual employees' car show, which always features lots of Jeeps. This 1973 CJ-5 with its original front winch, hardtop and 304 V-8 engine (60K JPEG) caught our attention. Owner Pete Dunkel of Galena, Ohio bought it new in 1973 and has recently restored it to like-new condition. For more photos from the show, see 3B's Making Splash at Car Shows. 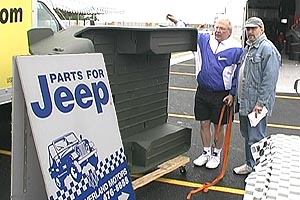 Willys-Overland Motors, the Toledo parts supply house which now owns that historic name, was present at the show with a display including one of their "Repli-Tub" replacement bodies which feature all mounting and dash holes pre-cut according to original specs (see a better photo of the tub, 50K JPEG). Owners Dennis and Jay have just moved the business to a new location near the old Willys Parkway factory, and their plans include using their large collection of original Jeep blueprints to assist shops interested in manufacturing other reproduction parts.

We enjoyed our stay in Toledo -- Saturday evening we had visited the botanical gardens and the jazz festival. Sunday afternoon we tore ourselves away from the stunning Toledo Museum of Art, which is the city's great legacy from the Libby family, and drove east along the turnpike to Pennsylvania. We were still following the route taken sixty years ago by Karl Probst, who had headed for the American Bantam factory, after his stop in Toledo to pick up drivetrain components from the Spicer company.

Thanks to Dave Hatch for the historical marker photo, and Jarek Skonieczny for the Jeep House photo. -- Derek Redmond

Continue to On the Trail of Jeep History, Part 2: Butler, Pennsylvania.