Willys Parade to the Chrysler Museum 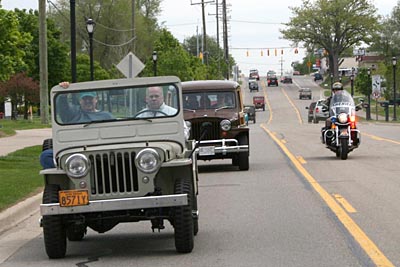 This may look like the Sheriff's motorcycle patrol is pulling over Bill LaBarbera in his CJ-3A, but it's actually the huge Willys parade, complete with siren escort, from the 2007 Spring Midwest Willys Reunion in Rochester Hills, Michigan, to the Walter P. Chrysler Museum in nearby Auburn Hills, on 19 May 2007.

See also Bill's 3A rolling through a red light (140K JPEG) with just about every kind of Willys you can think of right on his tail. Thanks to Ron Hattner for driving me and Roseanna in his new CJ-2A while I took these pictures. 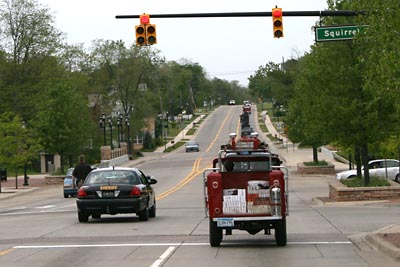 The CJ-3B Fire Engine driven by Kristi Rorah of Northstar Willys has probably sirened through a few red lights during its service life. It was one of the vehicles in the parade that got the most reaction from the many people who stopped in their tracks to watch and wave at the Jeeps. And although they may not have known it, if the 3B had come across a working fire in their town, it would have been quite capable of going to work with its full load of supply and attack hose. 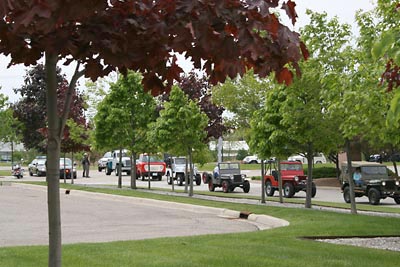 The Deputies waved the line of Jeeps into the grounds of DaimlerChrysler in Auburn Hills. In this photo Tom Hill's white 1959 CJ-3B is mixed in with some older flatfenders and some Jeep trucks. Anybody from DaimlerChrysler who was watching was probably pleased to see a sprinkling of more recent Jeep vehicles such as Libertys in the parade. 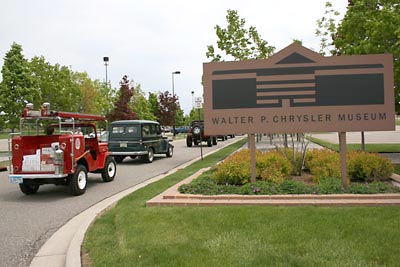 Note: as of 2017 the Walter P. Chrysler Museum is now closed, and the building is the U.S. headquarters for Maserati. Fiat Chrysler has put the vehicle collection into storage.

There were a few Willys vehicles included in the Museum collection, reflecting both DC's ownership of the Jeep name, and Walter P. Chrysler's successful work with Willys-Overland early in his career. 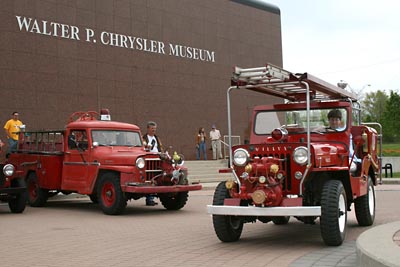 Kristi prepares to park the 3B in front of the museum, beside Paul Barry, who drove Ron Hattner's Valley Fire Truck in the parade. 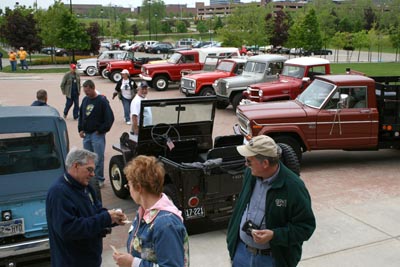 As the Jeeps lined up around the courtyard, one side seemed to be weighted a bit more toward the Kaiser and even the AMC era. This collection of Jeeps all together in such a picturesque setting was a real Kodak moment, and everybody had their cameras out. 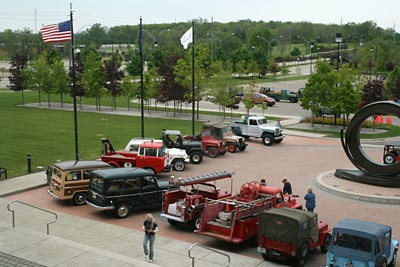 The other side of the circle was a great illustration of the Willys range, with Universal Jeeps, wagons, pickups, fire trucks, and Craig Brockhaus' FC wrecker. You can see there were also plenty more Jeeps further down in the parking lot. 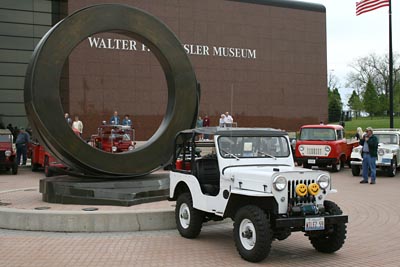 Maybe it was just where Tom Hill happened to be in the parade, or maybe it was all pre-arranged for CJ3B.info. Tom's "WILEZ 59" was parked center stage for the photo taking. 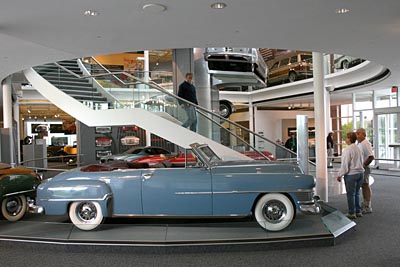 The museum was a fascinating trip through the history of the automobile, with a focus on the innovations developed by Walter P. Chrysler and his corporation. Of course many of the unique and historic vehicles on display are the big, sleek cars so closely associated with the Chrysler name, like this 1951 New Yorker convertible near the front door. It made for an interesting contrast with the little Universal Jeeps from the same era, parked just outside the door. 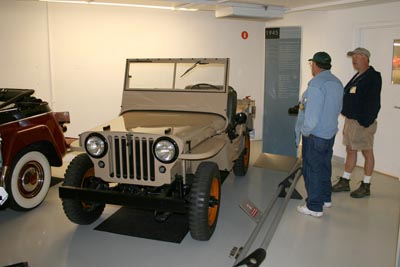 Aside from a World War II diorama (140K JPEG) featuring a Willys MB, the Jeeps in the museum are currently part of the diverse collection in the basement, known as the "Boss's Garage." There's a Jeepster, wagon, and CJ-5, as well as a 1917 Willys-Knight touring car (120K JPEG) and a nice Al-Toy Jeep Fire Engine model (110K JPEG) in a display case.

The CJ-2A being vigorously discussed here by Ric Meagley and Mike Peters, is a very early 1945 column-shift model, number 26 off the assembly line. 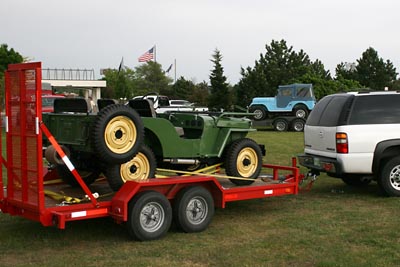 The next morning it was time for another kind of Willys parade, as scores of old Jeeps made their way back to their homes across the midwest and further afield.

Return to the 2007 Spring Reunion.
Thanks to Dennis Caraway and the rest of the volunteers who do a great job putting together the annual Reunion. -- Derek Redmond

See more photos from the annual Spring Reunions on CJ3B.info.