Howe Fire Apparatus of Anderson, Indiana turned out a lot of fire engines on the Jeep Forward Control truck chassis in the late 1950s and early 60's. 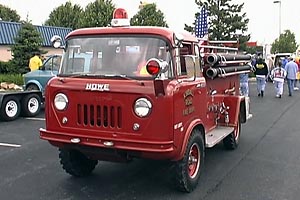 Seen here on display at the 2002 Spring Willys Reunion in Toledo, this FC-170 belongs to Richard Kimball of West Liberty, Ohio. Built as a pumper for service in rural Ohio, it carries suction hose for drafting, a ladder on the right side and front tow rings. It doesn't have much extra equipment stowage. See Howe Jeep Forward Control Pumper for detail photos of this truck and its pump controls. 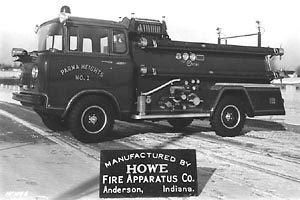 This is the builder's photo of a 1959 unit for Parma Heights, Ohio. It has a 500 GPM pump and 200-gallon tank, with Howe serial number 10428. The larger copy of the photo (50K JPEG) shows the different location of the pressure gauges, between the two mounted lengths of suction hose. It has equipment storage aft of the rear fender. See also a right rear view photo (60K JPEG). 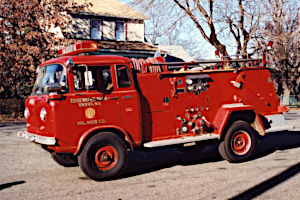 This 1964 Howe FC was in service until 2003 with the Edgewater Park Volunteer FD, a volunteer department that still operates in the Bronx in New York City. They purchased the 500 GPM pumper with 200-gallon tank new, and it served as Engine 3 until it was traded in for a 2003 GMC-Isuzu (400K JPEG). Photo by Jack Calderone. 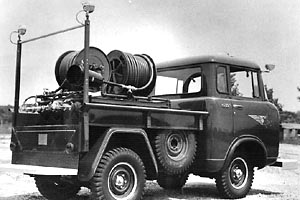 This one I don't have any details on; it appears to be a carbon-dioxide extinguisher truck. Built on an FC-150 chassis, it carries a battery of CO2 tanks connected to one hose reel, and possibly a water tank for producing foam through a second reel. The logo on the door suggests the truck in this factory photo was destined for a small airport. 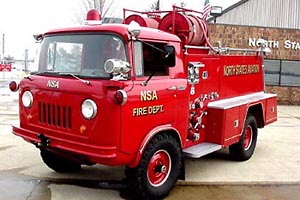 This 1964 FC-170 is a Howe conversion belonging to North States Aviation Sales in Michigan. With dual booster reels, lots of equipment storage, and no suction hose mounted, this truck appears to have been originally designed for specialized quick response, perhaps in an industrial plant. 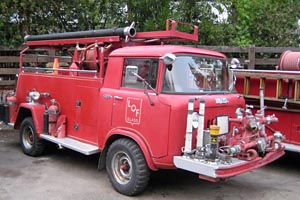 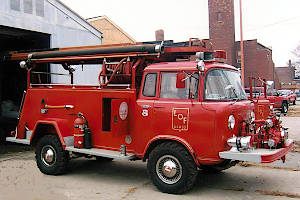 Libbey-Owens-Ford Unit 51 was a 1960 Howe bought for the L-O-F plant in Collingwood, Ontario, and later donated to the City of Rossford, a suburb of Toledo. See a rear view and right side view (40K JPEGs) taken by Dick Garard. In 2001 the truck was donated to the Toledo Firefighters Museum, who displayed it at Toledo Jeep Fest 2016. 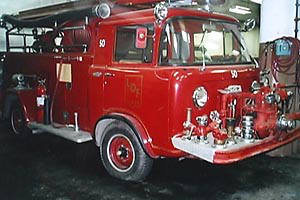 The first Libbey-Owens-Ford unit was a similarly-equipped but earlier 1958 model, in service at the factory in Rossford, which at one point employed 3600 workers. Note the L-O-F shield on the door (covered by a City of Rossford emblem on the third unit, above.) When the company disbanded their fire departments, Unit 50 was placed on permanent loan to the Jeep House collection at the old factory in Toledo, and as of 2017 is apparently in the Chrysler collection. Photo by Andy Harvey.

I also took some close photos of the front-mounted pump platform on Unit 50, which makes an impressive array of machinery. See the pump from the front view, the right side and the left side (50K JPEGs). 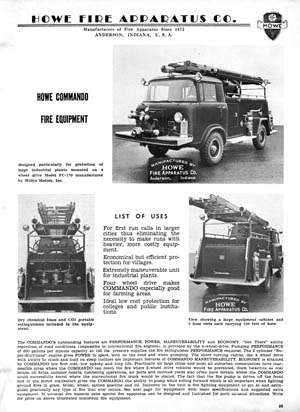 A Howe specs sheet in Andy Harvey's collection indicates that Howe referred to its Forward Control apparatus, at least at some point, as the "Commando". This is surprising, since Willys used the name in the 1950s for the Willys Commando Fire Truck version of its 6-226 truck.

The "List of Uses" on this sheet recommends the Commando for public institutions, industrial plants, villages, farming areas, and first-run use in larger cities. The small text also mentions mines, oil fields, summer resorts, lumbering operations, airports and ranches. The Super-Hurricane engine is described as having power to spare even on steep terrain and when operating the 500 GPM pump at 150 lbs. pressure. 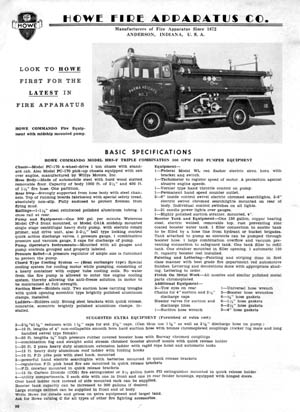 The reverse side of the sheet (240K JPEG) has the factory photo of Parma Heights No.1, and lists "Basic Specifications". It also lists "Suggested Extra Equipment" (at extra cost) including the utility compartments with hinged doors, behind and in front of the rear fenders. 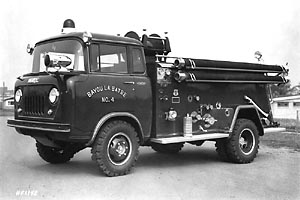 Particularly suited for conversion as a pumper with water tank was the heavy duty FC-170DRW, introduced in 1959. With dual rear wheels and Dana-Spicer 70 rear axle, it had a gross vehicle weight of up to 9000 pounds. This factory photo from the collection of Steve Hagy shows a 1960 FC-170DRW, serial number 10679, delivered to Bayou La Batre, Alabama (which Steve mentions was the location of the "fishin' hospital" in the movie Forrest Gump.) 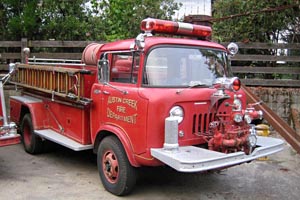 This FC-170 DRW is another truck in the collection at Willys America, the Willys truck specialists in Cazadero, California. The truck was purchased new by A. O. Smith Corp. of Milwaukee, Wisconsin and served from 1960 until November 2000 at their large plant, racking up 6,400 miles. The Howe body has a 300-gallon water tank, an Ansul dry chemical unit, and a front mounted CF-3 500GPM pump. 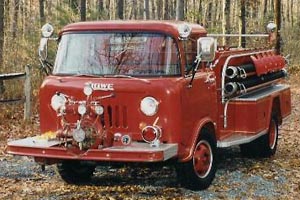 This 1964 FC-170 DRW was apparently bought new by the Western Electric Co. in Princeton NJ. It has a Waterous front-mount pump and equipment cabinets along the full length of the body. This means extinguishers and axes are mounted at the rear (60K JPEG). The low-mileage truck has a very original interior (30K JPEG). Current owner is unknown. 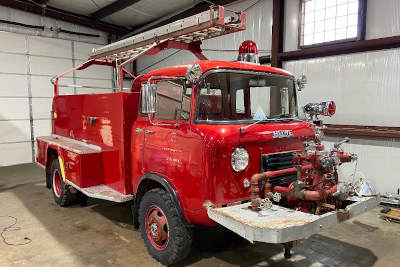 Here's a truck purchased as cab and chassis from Willys by the U.S. Department of the Interior, then custom built for the government by Howe, and delivered in 1964 for use at the Anderson Ranch Dam in Boise, Idaho. It was later given to a nearby fire department in Prairie, Idaho, and bought by a private collector in 2020. See the full story at The FC Connection.

The high, narrow overhead rack for ladder only, is unusual. 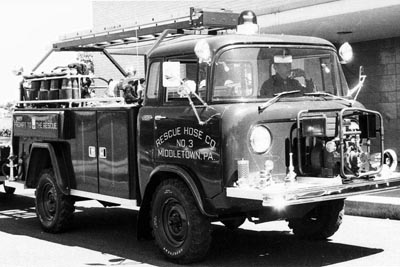 Another example with the ladder rack belonged to Rescue Hose Co. No.3 in Middletown PA, which was formed in 1888 and a century later became part of the Middletown Volunteer Fire Department. The front pump has been replaced by a portable pump. 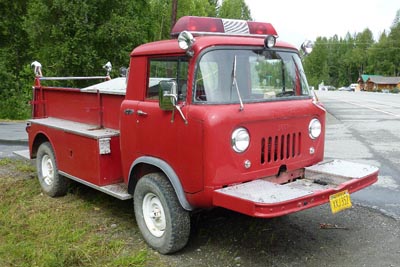 In the case of this one photographed in Talkeetna, Alaska, the front pump is missing altogether, as is the Howe badge on the front. But the truck was probably from Howe, who was the only company to produce a lot of FC's with big front pumps. See also a rear view (280K JPEG). Thanks to Dave Pete for the photos.