Our list of Surviving CJ-3B Jeeps includes Jeeps and their owners in order of serial number.

The CJ-3B serial number (VIN) is found on a plate under the hood on the right side of the firewall. This plate is from a 1959 model. See also the plate from CJ-3B number 12 in 1953, and a 1965 Kaiser plate. Reproduction plates in various styles are available from dataplates4u.com.


In some cases at least, the VIN is also stamped on the frame. The numbers on the frame are difficult to find without sandblasting. Look on the top side of the frame rail right at the front of the body tub. See some photos of Stamped Numbers on CJ-3B Frames.

Willys Service Bulletin 52-79 dated December 26, 1952 explains the meaning of the serial number prefixes Willys used from November 15, 1950 through 1954, such as 453GB2. Bill Norris found the document and provides this information from it:

The 57348 prefix which was used starting in 1955 has the following meaning, according to Service Bulletin 328 dated October 18, 1956, provided by Todd Paisley and titled "Identification of Willys Vehicles":

For more details from this document, see 1954 OB Serial Numbers.

Charlie Weaver transcribed a set of Willys-Overland Production Figures for 1945-61 handwritten by Willys employee Norton Young, and these figures are likely the most accurate available for those years. I have produced the CJ-3B figures below, by combining those Norton Young records with information from three other sources:

Note: VIN's published in the Standard Catalog of 4X4's by Robert C. Ackerson, show smaller totals in the 1950s. Missing or duplicate numbers for some years throw their accuracy into question. Their source is unknown. 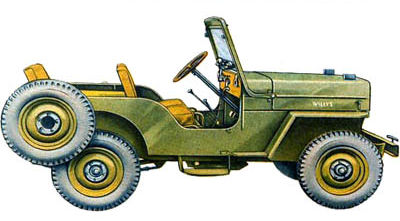 If you own a surviving CJ-3B, adding your VIN to our list can help verify the correct figures. Your information may not match the figures below, for several possible reasons:

Engine numbers may help to establish the year of a Jeep, but only if it still has the original engine. The number is found on the front of the engine block. See Plotting Engine Numbers for details on identifying original engines.

The axle assembly dates, if you can find them stamped on the raised area around the axle shafts, are a more reliable indication of the age of a vehicle.