Tracking and verifying Jeep production figures is as elusive as the proverbial World War II "jeep-in-a-crate," and flavored with equal amounts of Bovine Scat. With the production organization changing hands so many times, records have been lost, tossed or hidden from easy view. There's no such thing as "one stop shopping" when it comes to Jeep production info, to many Jeep researchers' eternal chagrin. 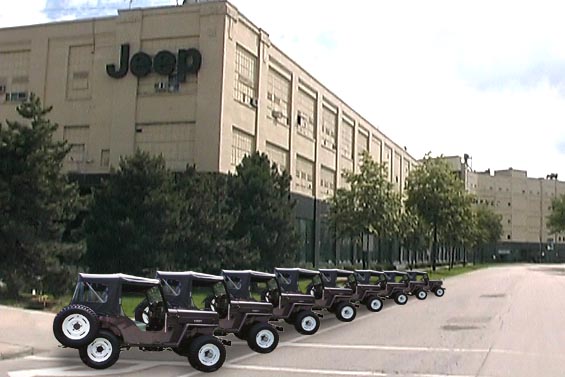 The big picture of Jeep production history is vague, with material covering certain eras being mixed with material from another era and another source. In some cases, the information conflicts from one source to another. You might get a production figure for a particular Jeep from one list and find the figures are several thousand off from the figures on another list. We're talking production info that comes from what would generally be considered as a primary source.

The problem is likely that many types of figures were kept. Calendar year production would be different than fiscal year production, for example. If the researcher doesn't learn the context of the figures he researches (and this is not always evident from the scraps of paper we often find), then you cannot really know for sure.

I present you with a recently discovered chart on CJ-3B production that was produced by American Motors Corp. in June of 1977, apparently from Kaiser Jeep records. Its cover pages reference it as "Total Production" for each model listed by year. This does offer, or at least hint at, some context, though one would wonder from which Kaiser Jeep production lists the AMC researcher drew his information on the early models. It's on Model History Cards that were produced for each Jeep model. Unfortunately, some pages are missing, though thankfully not the CJ-3B stuff. The original supplier of this material to my possession wishes to remain anonymous.

What's interesting and potentially useful to followers of CJ-3B history is that the new list shows '3B production all the way to '68 and even lists certain export models. You can make of this information what you may. For comparison, I suggest you look at the '52-61 CJ-3B figures from the Norton Young list of Willys-Overland Production Figures, which is generally acknowledged as the best and most detailed production information yet discovered, but short those tantalizing last years.

The new information does show military M-606 production, but unfortunately only the '68-on CJ-5-based M606A2 version.

Significance of the Figures

Thanks to Jim for passing along this information. Most of it supports the AMC figures published in Sessler's Illustrated Jeep Buyer's Guide, and also quoted by Arch Brown in Jeep: The Unstoppable Legend. The confirmation of figures from the mid-1960s is particularly useful as we are starting to receive serial number information from M606 Jeeps in places such as Argentina.

Other details that emerge from these new figures:

By the way, the photo at the top of this page is another example of "Bovine Scat". As is evident from the later "Jeep" sign on the plant in Toledo, this lineup of shiny new CJ-3Bs in Treebark Brown, blocking the lane for turning into the plant entrance, is a fake. Not too different from what I think the Willys photo retouchers used to do. I used Adam Charnok's side view photo of his 1963 Jeep. -- Derek Redmond