We now have CJ-3B production figures up to 1968, taken from several original Willys documents, as well as figures collected by American Motors in 1977, when they owned the Jeep corporation. Both these sets of figures are now included on the updated CJ-3B Serial Numbers page. This leaves a couple of significant questions:

Stan Peterson, now that he has finished the restoration of his No-Nonsense 1965 CJ-3B, has spent some time comparing the production figures with the serial numbers recorded by year in our list of Surviving CJ-3B Jeeps. Stan comments, "Many CJ-3Bs in the list are clearly not the year the owners think they are. Many are out of sequence. I think a lot of this is due to the possibility of owners not having a title and just going by what they were told. I also believe that some were titled the year they were sold and not necessarily the year they were built." 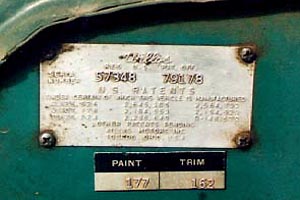 Stan's review of serial numbers in the Database suggests that "the serial numbers listed on the CJ-3B Serial Numbers page seem to be correct up to the start of 1962." Since those VIN's correspond with Norton Young's production figure of 17,844 for 1961, Stan's research tends to support that figure rather than the AMC figure of only 8,510 for 1961. For example, the VIN of Ron Ingram's 1961 CJ-3B seen here in the photo, would make it the 11,704th high-hood off the line in that year. Could there have been a large military or export order in that year, which was not counted in the AMC figures, or is there another logical explanation? The list of Surviving CJ-3B Jeeps suggests the possibility that there were interruptions where serial numbers were re-started at a higher number.

As of January 2001, the list included 84 Jeeps registered as 1962-1965 models. It's not a large sample, and some listings do not include VIN's, but there are enough to identify some patterns. Following Stan's lead, I looked at those numbers, and compared them with numbers calculated by starting with the last VIN for 1961, and adding on the AMC production figures for each year 1962 through 1965.

Note: The figures below are no longer accurate, with the addition of more Jeeps to the list, and the discovery of documents recording Kaiser Jeep 1960-67 Serial Numbers.

Stan Peterson comments, "I think it's safe to say that any CJ-3B with 6 digits following 57348 was made in '64. I saw some 57348's registered as '65's in the Database, but I'm going to stick with my theory that it's because some 3B's were titled the year they were sold and not the year they were made.

Significance of the Numbers

The list of Surviving CJ-3B Jeeps contains serial numbers for each year which range much more widely than would be expected based on the AMC figures.

Low serial numbers for a given year may be explained by vehicles having been updated by dealers to the year in which they were sold. Perhaps this could even explain the lowest 1964 VIN, which would appear to have been manufactured in 1962.

Serial numbers consistently higher than expected are harder to explain. The VIN's in the Database are increasingly higher each year than would be expected from the AMC production figures: by some 3,000 in 1962, 9,000 in 1963, and 16,000 in 1964. The highest 1963 VIN in the list (57348 114124) is a near-mint '63 sold on June 26 of that year, which seems like a reliable reference vehicle, and which certainly throws the AMC figures into some doubt at that point. Is the disagreement due to some vehicles that may not have been counted by AMC, as for the 1961 figures? Or is it due to the serial numbers being interrupted and re-started at a higher number at certain points, as the entries in the list suggest? 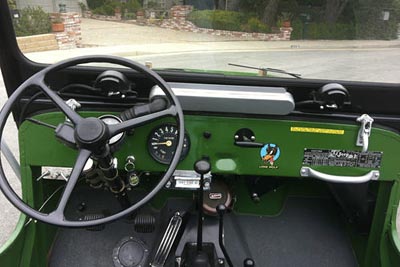 At first glance, the 8105-prefix numbers appear to simply follow on the 57348 series, because they end with similar sets of six digits. Those six digits do overlap slightly between the two series, but this may simply indicate some VIN tags with the old prefix being used up on the assembly line. (See Surviving CJ-3B Jeeps.)

The dashboard at right is serial number 8105 127602, one of the last CJ-3Bs sold domestically, from late in the 1964 model year. See also other views of its restoration/accesorization, including period fire extinguisher, flashlight and radio (50K JPEGs).

Thanks to Stan Peterson for his work on the serial numbers. -- Derek Redmond

See Surviving CJ-3B Jeeps for a list of surviving Jeeps, and an analysis of their significance which casts further light on some of these questions.