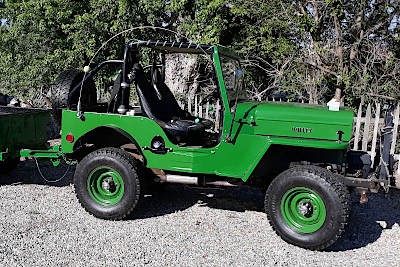 Darren in Idaho wrote in 2020: "I bought it in 1980 from the original owner, Darrell Hurst. He owned a large apple orchard in Sebastopol, California. It still had the original engine, but early on I swapped engines and have no record of the engine number. VIN number on the firewall is 453GB2 12213. The list of changes: 225 Buick V6, GM power steering, T98 transmission, 2.5-inch Rancho springs, 11-inch brakes, Detroit locker and full float conversion rear axle, Warn overdrive, dual system brakes, turn signals, seat belts and a full cage. I think that's it!

"The JD green and black theory is it's close enough to a correct Jeep color, can blend in in the woods when needed, and have a bit more hot rod pizazz on cruise night than OD green." 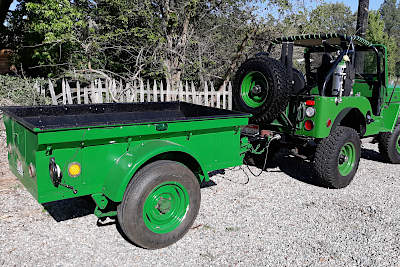 "I got the trailer in 1986. An MVCC member had brought in a train load of these WWII trailers. Draw bar, springs, axles and fenders had all een removed, laying inside the tub, all the same parts from another trailer in there as well, with tub from the second trailer upside down on top, both tied together by the rope hooks with wire. As far as I could see were similar stacks. Other than repacking the bearings, I left the trailer as is until a month ago. Finally decided it was time to media blast off the rust and match it to the 3B that usually tows it." 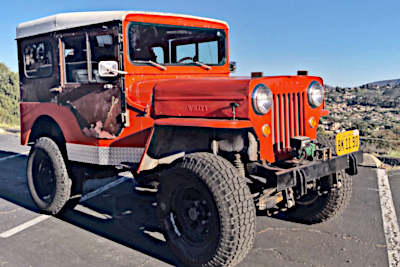 Francesco in San Diego bought this '53 tub on a CJ-3A frame and a Toyota motor in 2019, and has been doing some upgrades including mounting an Arctic Top. He describes his project in California Jeep With an Arctic Top. 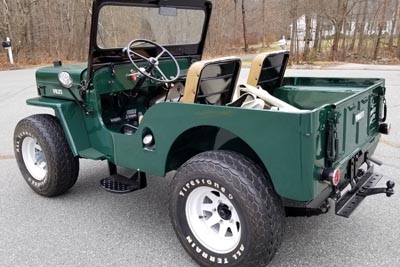 I heard from Matt in East Hampton CT in December 2019. He had recently acquired this early '53, serial number 15027. Matt says, "I purchased it from a gentleman who had just passed away after finishing it. It's a full body-off nut and bolt restore. 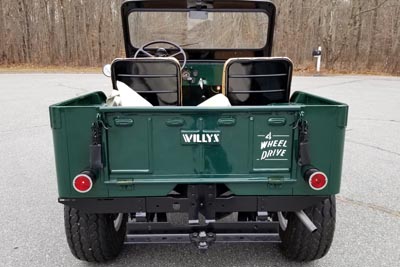 "It originally started life as one of the Raymond concrete piledriver Jeeps. I have the rear winch assembly for it as well. I've always wanted a CJ-3B after driving a '44 Willys MB military jeep. Can't enjoy it yet here in the winter, but looking forward to spring." 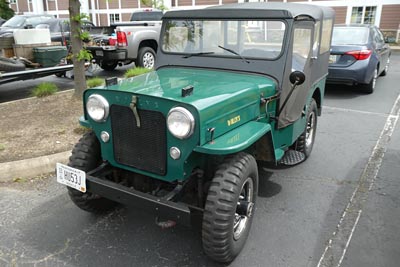 Dave Streithorst in Kettering, Ohio has owned this Jeep for 35 years, and is the second owner. It's mostly unrestored, but was repainted in the late 70s. Accessories include a chaff screen and a well-preserved Kayline vinyl top (200K JPEG).

This photo was taken at the 2018 Spring Willys Reunion. 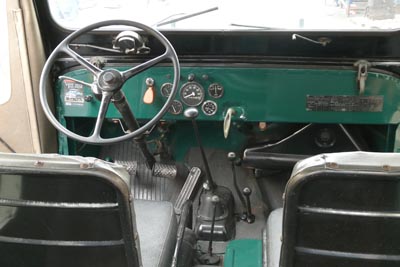 An interior photo reveals the original Harrison heater and the lever between the seats for the rear PTO (320K JPEG), to which Dave has added a belt drive pulley. 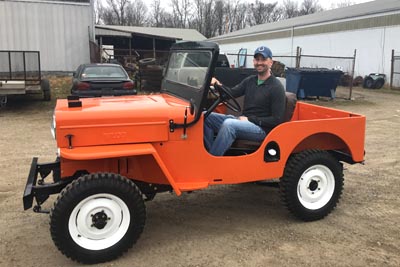 Craig wrote from Colorado Springs in early 2019 to say, "I just had my Grandpa's 1953 CJ-3B restored. My Grandpa (110K JPEG) turned 92 a couple weeks ago. He used the Jeep as a farm truck on his farm in Indiana. He bought it in the late 1970s from his neighbor who was the original owner."

See a photo from the passenger side (70K JPEG). 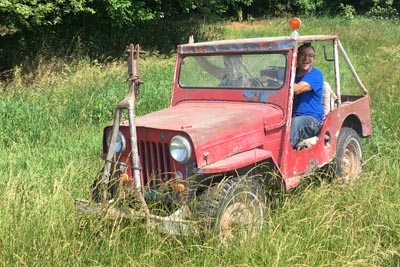 Craig also sent this picture of his parents in the Jeep before it was restored.

The work was done by Specialty Jeeps in Coshocton, Ohio, who have documented the process thoroughly with photos on their website. 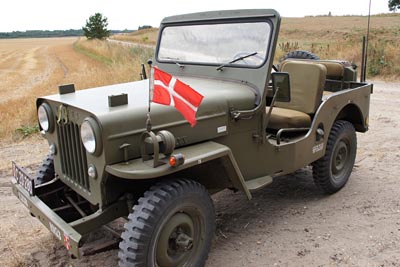 Anders in Denmark wrote in 2018, "My '53 CJ-3B was used in the Danish military until 1969 and after that has had at least 3 different owners before me. The car is mostly original (170K JPEG) with some additions like electronic fuel pump and ignition, and a few other things.

"It has the 2.2 L Hurricane engine. I have not been able to see the engine number yet, but I assume it is the original engine and gearboxes. The car's serial number (100K JPEG) is 453GB2 20280. I plan to keep it as original as possible." 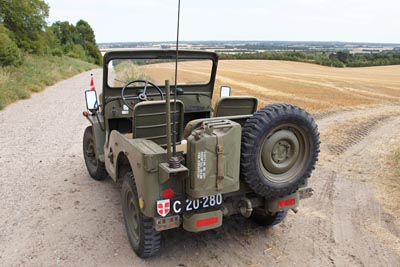 The Jeep came with military options from Willys such as the pintle hook and bumperettes, and the Danish Army equipped the rear end with antenna, jerry can and spare tire mount, as well as blackout taillights made by Ermax. Other standard additions included electric wiper motors and side marker lamps. 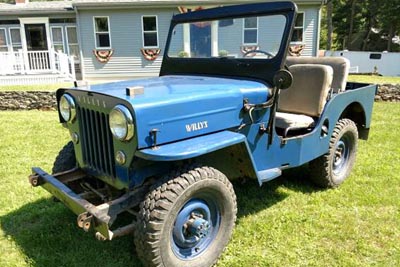 Jon wrote in late 2018: "My name is Jon Knight from Smithfield, Rhode Island. I just bought this time capsule from Dartmouth, Massachusetts. It has zero rot and zero rust (shipped east from California six months ago.) VIN 30774, engine number 4J35218." 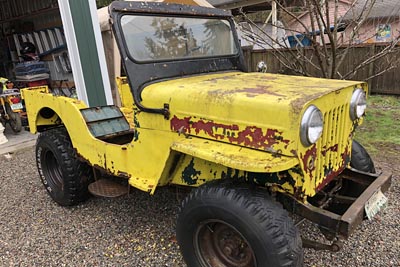 Jerry wrote from Seattle in early 2018, "I bought my 1953 CJ-3B recently from an owner who had owned it since the early 80s, sitting in a field up in the hills. It was complete, minus the seats, and is going through a restoration now. I have to replace the tub with another one I already had and have been saving for just this situation. The front end and frame are all in great shape, but the tub (400K JPEG) is completely rusted out, everywhere." 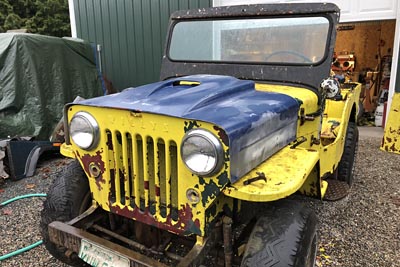 "It came with the original running gear, but I believe I am going to update it slightly instead of rebuilding the original. I have a couple other Jeeps that are truly all original, so this one I wanted to be a very mild resto-mod. I have an Iron Duke 4 cyl, 4 speed and Dana 300 transfer case, along with matching diffs that all came out of a 1981 CJ-5 that will go into this one. Something updated, reliable and not something that everyone else is doing. I figure it will still be good for the trails and will run down the highway OK."

"The blue hood is one of the new hoods that I manufacture for the old flat fender Jeeps, low and high hoods. This particular one will go on the CJ-3B in the end."


Jerry also mentions a problem he had with registering the title: "My biggest challenge so far came when I went to transfer the title and the DMV valued it at $14,600! $1400 in taxes? I only paid a couple hundred dollars for it. I have had many, many Jeeps and never ran into this problem before. The trick was that this model was in their system and all of the others were not. When it isn't in their system, they just look at the antique car guide and then rate the condition off a 6 tier model and then you pay tax on the corresponding value. I had to pay a few hundred dollars to have it appraised (more than I paid for the Jeep.) Now I've got the licensing taken care of and we're off and running on the resto." 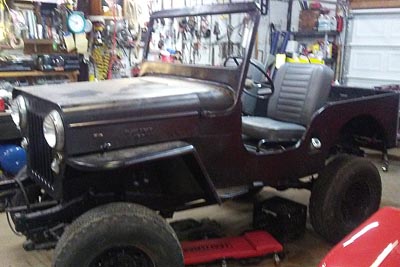 The new parts list is extensive, with major work already done -- brakes, wiring harness, body mounted to frame. Engine work is iffy and it still needs overhaul of steering and drivetrain. I am taking it to Trinidad CO so it might need a power upgrade from the F-head." 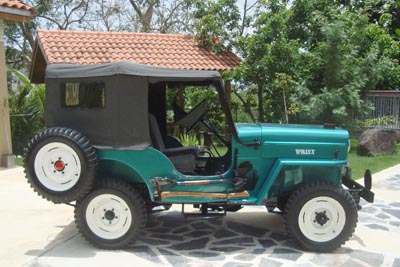 Hector in Puerto Rico says, "My first antique car was this Willys CJ-3B 1953 -- it was purchased in excellent condition in the year 2000. Its restoration was performed by Nelson Burgos from Orocovis P.R. in 1997, and we have maintained it like that. I got it because it brought back memories of my father's Jeep, where I learned to drive." (See Restoring My Father's Jeep on CJ3B.info.) 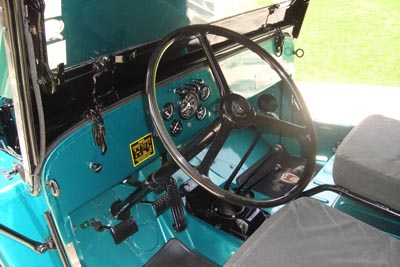 See also the engine (210K JPEG). Note there are some details not original to a 1953 model, including the covered fresh air vent hole on the right side cowl, and the Sparton horn. 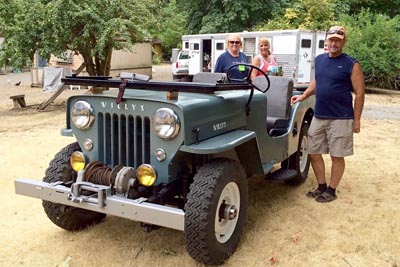 "I live in a log cabin on a homestead in Washington State. I restored my 1953 CJ-3B to the most original form I could. I even painted it the original color. My wife's great grandfather bought the Willys brand new in 1953, and she and her brothers rode in it when they were small children." 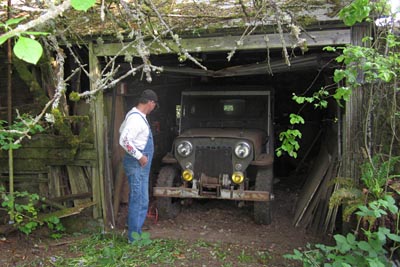 "The old barn it was stored in was just about to fall over so 2 years ago the brothers basically said that we could have it if we wanted it."